Disneyland - Paris....  where the magic starts

► You are here:   France  ›
Tourism  ›
Disneyland Paris
About-France.com - the connoisseur's guide to France 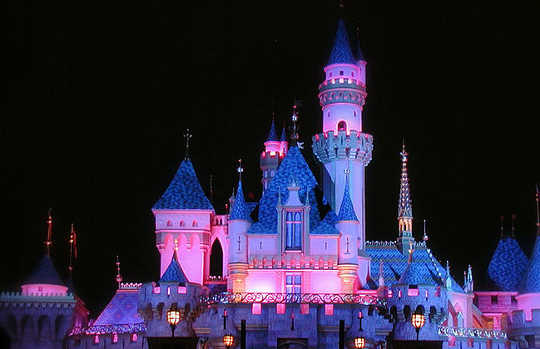 
The most visited tourist attraction in France

The magic starts here ...
Want a trip into the world of make believe? Want to meet some of your favourite stars of screen and TV? For kids and adults alike, a trip to the Paris Disneyland is just that; a fabulous opportunity to step over the rainbow and enjoy a day or two packed with fun, thrills and entertainment, all available for the taking in the French countryside just a few minutes from Paris.
Though not everyone's cup of tea, Disneyland is generally a must-see location for anyone visiting Paris with children . Yet with its rides in time, in place and in space, and its themed areas, Disneyland Paris claims to have something for everyone, adults and children alike. Even for the serious-minded, there are areas like the Discovery Arcade, or a chance to learn how film stunts are actually done.
Rather than a single park, Disneyland Paris is actually two parks next to each other; the original Disneyland Park, and the newer Walt Disney Studios park. The classic rides and themed areas, including Fantasyland, Cinderella's Castle, Main Street USA, Pirates of the Caribbean or the wild west experience of Big Thunder Mountain are all part of the original Disneyland park – where there are also of course opportunities to meet classic Disney movie characters - so as to speak - in real life.

Accommodation at and near Disneyland Paris

The newer Walt Disney Studios park is a separate area, that may require a separate entrance ticket.  (see below).  This film studio theme park offers a classic range of movie themed rides and shows, including the Twilight Zone Tower of Terror, or the studio tram tour that takes you behind the scenes for an unforgettable insight into how the movies are made.

Disneyland Paris offer a range of options including all-inclusive visits   covering accommodation and entrance to the parks. Alternatively, for those including a trip to Disneyland as part of a holiday in Paris or even as a short trip from home, entrance tickets to the parks can be bought on line directly from Disney .

Worth noting: if you want to include a day at Disneyland Paris among a number of outings during your stay in Paris, you may be interested in the Go City Paris explorer pass. In 2022 an adult three-attraction Paris Explorer pass costs 99 €, while a fixed-date adult day pass for Disneyland Paris cost between 79€ and 114€ on the Disney site depending on date.

IMPORTANT : Tickets covering more than one day automatically include unlimited access to both parks; but be warned, the single one day standard ticket, valid for 1 year from date of purchase, only includes access to ONE of the two parks.
If you plan a single day visit to Disneyland Paris and want to see things in both the parks, then you should take the Single-Day  "magic ticket" or two-park hopper ticket. The price is the same as the one day single-park standard ticket; the difference is that the two-park hopper ticket is for a fixed date. You must indicate the date of your visit when buying the ticket.
Tickets can also be purchased at the entrance. 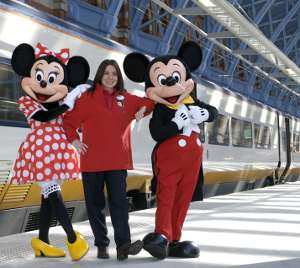 Taking the train to Disneyland

There are direct trains from London St.Pancras to the Marne-la-Vallée TGV station, located right at the Disneyland theme park, on Fridays, Saturdays and Sundays. The direct Eurostar service ususlly leaves St Pancras at 10.15 and takes under 3 hours.
However, be warned! It is often possible to get tickets for half the price by taking an earlier or later Eurostar, and changing trains at Lille. This is very easy, and connecting trains often use the same platform.  This takes about an hour longer, so it's still pretty fast.... The break at Lille Europe train station is usually just long enough to get a cup of coffee or a glass of wine, and let  kids stretch their legs and let off steam.
Eurostar tickets can be booked at best rates on the The Trainline website (click).

If you buy your train tickets separately, to benefit from the lowest price train services, you'll need to buy tickets to Disneyland separately (though these can also be purchased at the entrance). You may also want to book your hotel tickets separately. Click here for hotels in and near Disneyland Paris.

With up to more than 15 million visitors a year, Disneyland Paris is France's and Europe's most visited tourist attraction. Just a short ride from Paris Charles de Gaulle airport - Continental Europe's busiest airport - and with direct Eurostar train services from London and TGV connections from Brussels and Amsterdam, the Paris Disney theme park is eminently accessible.
Open 365 days a year, and with a hotel capacity in the order of 10,000 rooms, the Paris Disneyland offers the oppotunity to visit a new world without actually having to leave the Old.


About-France.com is an independent user-supported website that does not track visitors, We may receive commission from sales made on selected partner websites reached through affiliate links.


When to visit Disneyland....

In short, the answer is "whenever you want".  You'll never be able to get the place to yourself, but like all tourist attractions, Disneyland Paris has its busy periods and its less congested days.....

Saturdays, Sundays and to a lesser extent Fridays are the busiest days of the week.
Tuesdays and Thursdays are the days with least visitors. 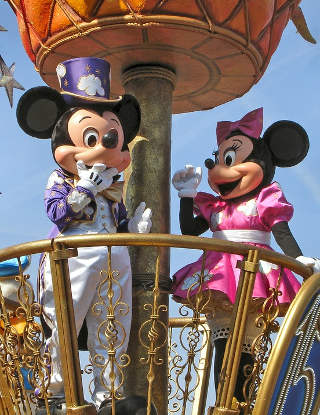 Photo top of page by Oudeopa