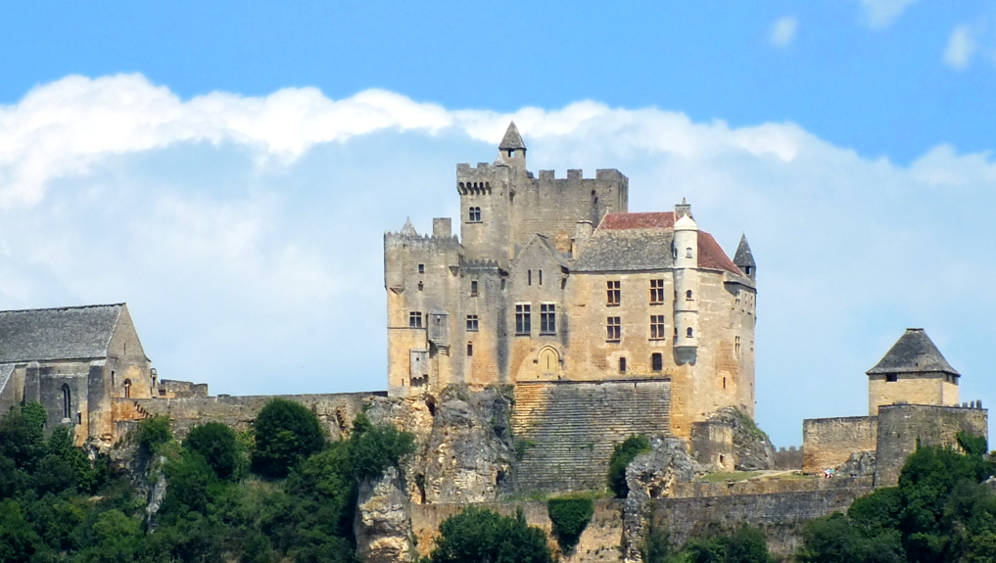 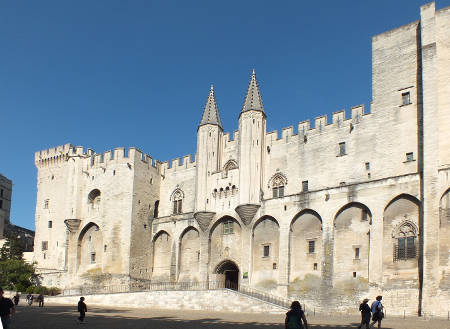 The fortified medieval papal palace in Avignon
This page lets you discover some of the most authentic French castles and fortresses that have survived from the Middle Ages . It does not include Renaissance chï¿½teaux (for these see ► Renaissance chï¿½teaux) nor medieval castles that were extensively rebuilt and/or embellished in the nineteenth or twentieth century.

There is not a single region of France that cannot boast some fine medieval castles.


France - the heritage of medieval conflicts

Stay in a medieval castle ?

Among the medieval castles that are still lived in, a few are now hotels or B&Bs, offering a very special experience to guests.


Normandy - Cotentin peninsula.
Hostellerie de Bricquebec - In the heart of the Cotentin, south of Cherbourg, a three-star hotel within the ramparts of the medieval fortress


Multiple conflicts in medieval Europe - not just between different nations, but between rival factions within France – including the English (who were really French at the time) - have left much of France with a great heritage of fine medieval strongholds.
In the Middle Ages, France was much smaller than today. Much of the south was disputed territory fought over by the kings of France, the Kings of Navarre and the Kings of England.... not to mention the Dukes of Burgundy or Savoy, the Dauphins d'Auvergne, the Pope, the Holy Roman Empire, and other lesser players in the medieval games of thrones.
In the North, the Kings of France had to contend with the rivalry of the great Dukes of Normandy and Brittany and Lorraine, while to the east, France did not stretch as far as it does today.
As strategic sites that were liable to be attacked in times of war, many of the great medieval fortresses were partly destroyed many centuries ago. Others escaped destruction in the theatre of war, but fell into disuse once they seased to serve any purpose. In some cases locals pillaged them for their building materials, in others they just gradually turned to ruins under the effects of time and the elements.
After the wars of the Middle Ages came to an end, a surprising number of castles were however recycled into impressive residences, with new living quarters added onto their medieval infrastructure. This was notably the case with castles located in or beside towns or cities, as at Angers, Avignon, Chinon or Sedan... but also in some rural areas too. While many strongholds in the Auvergne mountains, and many Cathar castles  located out in the wilds, today stand as impressive ruins, many of the fortified places in the Dordogne, such as Beynac (photo top of page) were converted for more peaceful purposes.

A selection of medieval castles in France 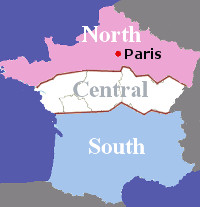 It is not easy to pick out the best medieval castles in France; taking into account all the ruined fortresses, those in semi-ruin, and those that have managed to stand the test of time, or have been converted over the course of the centuries into peacetime chï¿½teaux, the choice is enormous. The lists below offer a choice of some of the most impressive – some of them very well known and firmly on the tourist trail, others less well known and less visited.  This list just scratches the surface. Many smaller medieval strongholds, ruined or not, can only be discovered by chance, by taking a trip to a local tourist information office in France, or by patient searching on the Internet.
:

These are the tip of the iceberg.  For more extensive fortified places in France, see Walled cities in France.

There's more to France than the same old sites that are mentioned in all the tourist guides .....

Photo above : Beynac, one of several fortified castles dating back to the Middle Ages, and much fought over during the Hundred Years War.


The  best of France
by theme