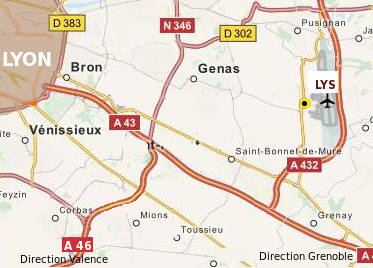 Lyon Saint-Exupéry airport is located  some twenty kilometres to the east of the city of Lyon, beside the outer orbital motorway A432, just to the north of the A43 Lyon-Grenoble motorway. It is also easily accessible from the Lyon-Geneva and Lyon-Bourg-en-Bresse motorway, as well as from other motorways in the area.

Lyon is France's second city, and Lyon Saint Exupéry airport (formerly known as Lyon Satolas, and airport code LYS)  is one of the main provincial airports in France. It serves a whole sector of central and central eastern France, and is the most convenient major airport for the Rhone Alpes region of France, and parts of the neighbouring regions of Burgundy, Franche Comtéand Auvergne. It is very easily accessible from the cities of Lyon, Grenoble, Chambery, St. Etienne and Valence.


Hotels in Lyon Click here
for a choice of  hotels in and around Lyon
Regional
guide :
click for...
Guide to Rhone Alpes

There are two hotels actually on the airport at Lyon Saint Exupéry, the four star NH Hotel and the three star Comfort Hotel hotel..  The next closest hotel is the **  Campanile, 4 km from the terminal buildings.. but there is no free shuttle.  Otherwise, choose a hotel in or near Lyon.

► Access to Lyon airport by fast tram
The airport offers easy and rapid access to and from the centre of Lyon on the Rhonexpress light-rail link in just 29 minutes, with services every 15 minutes. The Rhonexpress airport shuttle takes you directly to Lyon Part-Dieu station, Lyon's main train station. 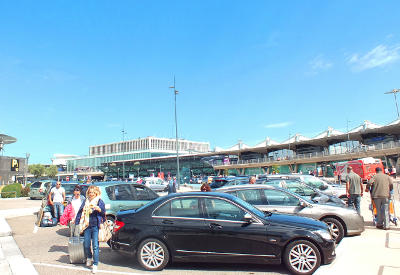 The Airport has parking space for over 6000 cars, though rates are relatively expensive. There are private operators offering car parking a short distance from the airport, at considerably cheaper rates.
Of the official airport car parks, Lyon airport's "e-Park" is cheaper than other airport parkings (45 € for up to 1 week, 55 for up to 2 weeks + reservation fee).
Finding clear information on Lyon airport's official site is not easy – and the site is notoriously lacking in transparency on parking tariffs.
For dropping off and picking up, the very-short-stay carpark (signposted "Depose Minute"), located in front of Terminal 2 (photo right),   offers 20 minutes FREE parking, but after that the rates are exorbitant, 1 euro every four minutes extra. Be warned!  This parking area is just a few metres from the terminal building, so twenty minutes is quite long enough to accompany someone into the terminal, say goodbye, and return to one's car, or else meet an arriving visitor at a pre-arranged time.

► The terminals
Lyon is a provincial airport, so terminals are not far apart. The three terminals can be easily reached on foot from the "depose minute" car park, and from each other.

► Checking in
The Airport authorities recommend checking in at least one hour before your flight is due to depart.

► There are scheduled flights to many countries in Western and central Europe, and Scandinavia, including flights to London Heathrow, Gatwick and Stansted.
► There are regular flights to and from New York (Air France / Delta), and Montreal and Toronto (Air Transat).
► Several companies operate scheduled flights to the Mediterranean area (Europe, North Africa) and to Eastern Europe..
►   Easyjet has established a hub at Lyon, with a dozen regular destinations and other seasonal ones.
There are also a large number of charter flights serving holiday destinations.


Copyright text and photos © About-France.com 2007 - 2019 except where otherwise stated. Map enhanced from a base by openstreetmap.org

Photo top of page by Sophilayla