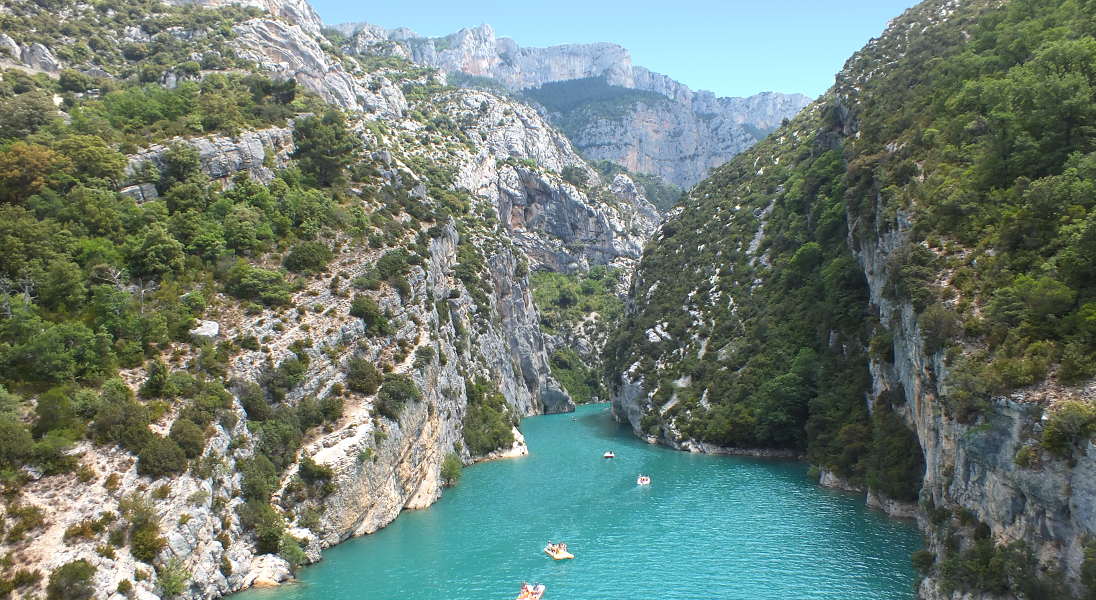 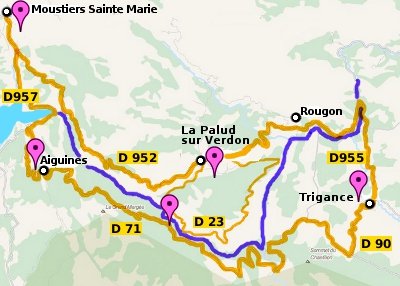 The deepest gorge in France, les Gorges du Verdon, is one of the must-see natural wonders of central Provence. While there is no road up the gorge, there is a breathtaking circular "corniche" route around the rim of the gorge, and plenty of opportunities for boat and kayak hire on the lower end of the gorge.

Access:
The Gorges du Verdon are most easily accessed from the Manosque exit (exit 18) of the A51 motorway (Aix en Provence to Gap) , and thence via Valensole and Riez, to Moustiers Sainte Marie.

The Verdon Gorge - one of France's finest natural sites

A selection of hotels near the Verdon Gorge

Moustiers Sainte Marie
Hotel les Restanques de Moustier - three-star hotel with pool, a kilometre from the old town
Aiguines - Hotel du Vieux Château
Two-star hotel in the in traditional building in the heart of the old village
D71 - Hotel du Grand Canyon
Perched on the edge of the gorge. Panoramic restaurant.
Trigance - Logis du vieil Amandier
Small 12-room *** hotel with pool and restaurant
Forget the tourism-website hype.... Provence is not all olive groves, vineyards, swimming pools, Mediterranean pine forests and lavender fields. The region, whose name is often shortened to Provence, is actually known as Provence - Alpes - Côte d'Azur, or in English Provence Alps and the Riviera. Moving east from Avignon, or north from Nice, one soon gets into hill country and very soon after that into the  limestone massifs of the Alpine foothills. The land is arid and in places barren and fiarly inhospitable; but though the climate here is generally dry, this is an area crossed by rivers flowing down from the snowy peaks of the Alps,. Over millions of years, they have carved deep valleys in the limestone, none of them longer and deeper than that of the Verdon.
From its source near the Italian Border, the Verdon runs south as far as Castellane, then west to join the Durance near Manosque. While much of the valley is spectacular, it in is the section between Castellane and Manosque that the river has carved its impressive canyon

The recommended Gorges du Verdon circuit starts from Moustiers Sainte Marie, a very pretty little town which tends to get overcrowded at peak tourist periods. The circuit as far as Trigance and back is about 90 km in all, and  takes a little under two hours – not allowing for stops. And since you are most likely to make frequent stops, count quite a bit longer.
The best views of the gorge are to be had from the D71 and the D23. Note that both of these are narrow roads with lots of hairpin bends.
Taking the circuit in an anti-clockwise direction, you will cross the pont de Sainte Croix at the point where the Verdon flows into the Lac de Sainte Croix. Boat and kayak hire is from near the bridge. Shortly after that, turn left onto the D 19 which will take you to the pretty hillside village of Aiguines, with its restaurants and shops selling local produce. 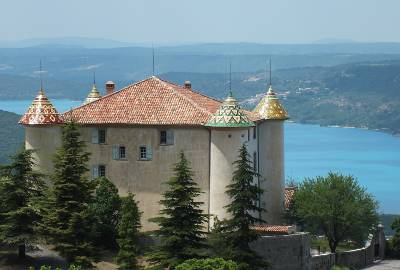 The Château d'Aiguines and the azure waters of Lac Ste.Croix.
Aiguines is the start of the journey round the gorge. The road winds quickly up to the Col d'Illoires, from where there wre views back to the sapphire blue waters of the Lac de Sainte Croix, and forwards into the Gorge du Verdon. As you continue along the D71, you may well want to stop for photos; you may well be disappointed, as there are not many stopping spots in the most dramatic parts of the route, and many of the stopping places that there are are very small - just room for two or three cars.
However you will have opportunites to stop later on. There is room to pull off the road beside the Hotel Restaurant du Grand Canyon (the pink marker half way between 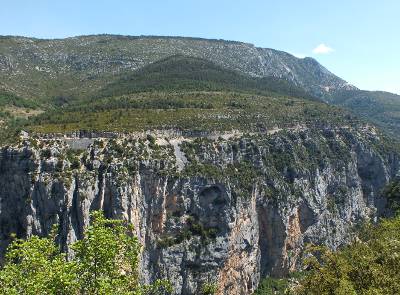 The D71 road clings to the southern rim of the gorge.
Aiguines and Trigance), where the views are spectacular. A couple of kilometres further on, there is a pull-off spot just before the Tunnels du Fayet. The views here are amazing... but not for those without a head for heights. The tunnels are carved into the wall of the canyon.
Six kilometres further on, there are more spectacular views (and a bar/restaurant) at the Balcons de la Mescla.
From this point on, the road leaves the gorge. After 7 km, turn left onto the D90 towards the small village of  Trigance, a typical High-Provence village, with narrow streets, a bakery and a couple of hotels. Unless you plan to stop at the hotel in the château, leave your car at the car-park beside the D90, and visit the village on foot.Below the village, at the point where the D90 joins the D955, there is a bar and restaurant, also selling local produce. 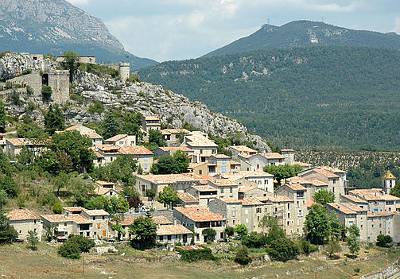 The village of Trigance
From now on, on the D955 then the D952 you will be driving on two-lane roads again, all the way back to Moustiers – unless you take in the extra loop of the D23 circuit, to view the gorge from the north side.
Six km after Trigance the D955 joins the D952 . From this point on, the road follows the river Verdon at the foot of the gorge for four impressive kilometres before climbing up to a point called "Le point sublime" (bar, café, restaurant, small hotel).Here there is another spectacular viewpoint, looking down the "canyon" part of the Verdon gorge.
The village of Rougon, a small cluster of houses on a high ridge, with the ruins of an ancient castle, is three kilometres off the D952.
Eight kilometres after the Point Sublime, you reach La Palud sur Vernon, a large village surrouned by fields. La Palud has campsites, hotels and a youth hostel.  From here , you can take the D23 loop to return to the gorge. For part of the way, this road hangs precariously to the north side of the gorge, more or less opposite the Hotel du Grand Canyon. The D23 must be taken in a clockwise direction, as a section in the middle is one-way only. There are a number of dramatic viewing spots along the D23, and with less traffic on this loop, stopping can be easier than on other parts of the circuit.
From La Palud, it is then an easy drive back to Moustiers. The D952 offers more spectacular views of the gorge and down to the azure waters of the Lac de Sainte Croix.

There are plenty of opportunities for hiking in and around the gorges du Verdon, varying from the gentle and easy to the technical and difficult. At many of the parking spots there are footpaths marked.
One of the most popular with hardened hikers is the Sentier de l'Imbut, which starts near the Hotel du Grand Canyon, on the D71. The basic hike here follows the GR99 hiking trail from the lip of the gorge, down to the bottom, and back up again, and takes 2½ hours. It's quite a hike, but accessible to most fit hikers. Proper shoes or boots are essential.  There is a footbridge over the river, and it is possible to continue on up the north side of the gorge.
Down at river level, experienced hikers only may like to continue along the sentier Vidal which includes sections cut into the rock, and a hard 45 minute climb back up to the D71.
For longer but less energetic hikes, there is a choice between two GR hiking trails,  the GR99 which can be followed from Aiguines to the Sentier de l'Imbut (where it ends), or the GR49 which can be followed from Trigance to Rougon. Alternatively, from the car park at Trigance take the GR49 for five km, then branch left for the Balcon de Rancoumas, a spot that provides perhaps the most breathtaking views down into the canyon. This is a 12 km round trip.

Kayaking or boating into the lower part of the gorge is a popular activity, and kayaks and other types of craft can be hired at the top end of the Lac de Sainte Croix, at boat-hire outlets near the bridge on the D957.
Rafting is not practised in the Gorges part of the Verdon valley. For rafting on the Verdon, it is best to go further up the valley, to the small town of Castellane, where there a couple of companies providing rafting trips on the river in July and August.

Bird watching in the Verdon.

Vultures were reintroduced into the Verdon gorge in 1999. Today Griffon vultures and black vultures are among the largest birds that can be seen in the gorges du Verdon; but there are also eagles and other large birds of prey. The vertiginous crags of the gorge provide perfect nesting areas for these large raptors.


Discover more of France off the beaten track  ..... 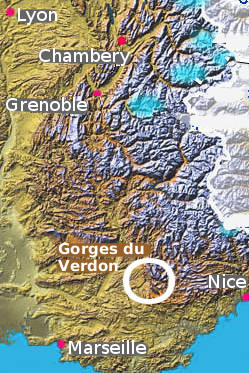 A deep chasm through the limestone plateau