The Best of Rural France

The most attractive and tranquil areas of rural France

► You are here:   France  ›   The Best of France  ›  Rural France
About-France.com - the connoisseur's guide to France

Far away from the crowds - rural France at its best


Most of France is "rural", in the sense of land that is lightly (not sparsely) inhabited, areas characterised by their small towns and villages and by agriculture. In a word, most of France is countryside.
Holidaymakers looking for somewhere to chill out and relax in the peace and quiet of rural France  thus have a huge and very varied  area to choose from. Those for whom the main aim of a rural break is to relax in the shade of a tree or beside a pool, and do nothing for a week or two, have virtually the whole of France to choose from. Those wanting a bit more than that, i.e. to have a quiet rural base from which to explore interesting countryside, interesting walks and wildlife, or interesting heritage or attractions nearby, need to be a bit more choosy.
There are plenty of parts of rural France that are very peaceful but not terribly interesting. There are lots of villages in France that are very attractive in their own right, but surrounded in all directions by little else but fields.
Generally speaking, the French countryside - as indeed countryside anywhere - is more interesting in hillier parts. This is all the more so in France insofar as the hillier parts of France are also the areas where the historic rural heritage has survived most strongly.  Generally speaking, and with some exceptions, notably rural Brittany, this means France south of the Loire and west of the Seine.
With this in mind, About-France.com brings you a pick of eight of the best rural departments (counties) in France, departments that are deeply rural and far from the crowds, yet offer interesting countryside with plenty of opportunity for rural pursuits, and plenty of interesting sites and sights to visit 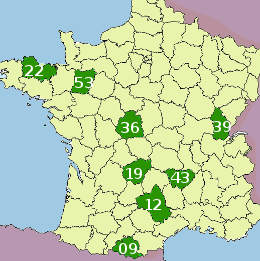 Listed alphabetically, here is a pick of eight of the best French departments in which to enjoy a rural break, away from the stresses and strains of city life. These eight departments are all very rural, have plenty of interesting things to see and do, but do not have a lot in the way of major tourism development (except, in the case of Côtes d'Armor, 22, on the coast).
Some of these departments (Ariège - 09, Haute Loire - 43, and Mayenne - 53 ) are among the ten least visited departments in France, which, given what they have to offer, is surprising. These are the best hidden gems. Only two of the eight departments selected, Aveyron - 12 (partly on account of its size) and Côtes d'Armor (where the coast is popular) received slightly over half a million tourists in 2012... compared to over 2 million visitors each, sometimes well over,  for the most touristic departments of France, and over 15 million for Paris.
The list deliberately excludes the most popular rural departments, like the Dordogne or the Charentes, which are well-known and have a thriving rural tourism industry.

While the cities and coasts of France are the parts that attract the most tourists and visitors, they are only a small part of the country. Above all, France is rural, rather than urban or coastal. Compared to the UK, France has about the same population, but its population is spread over an area twice the size. In addition, only a small part of France is wilderness (just a few high mountain areas), unlike the UK where large areas of Scotland, Wales and northern England are largely uninhabited.

Hiking trail in the Aveyron

The French countryside can be splendid in the autumn - Haute Loire

Upland country... great for hiking, great for views, but often lacking in other points of interest.


About-France.com respects your privacy. Cookies are used for purposes of statistics, interaction with social media, and some advertising. No personal details are tracked. If you are OK with this click otherwise find out more about cookies
About-France.com does not collect any data from users. We use cookies solely for audience statistics and to enable social media and a few advertisements. To remove this message, click   or otherwise click for further details