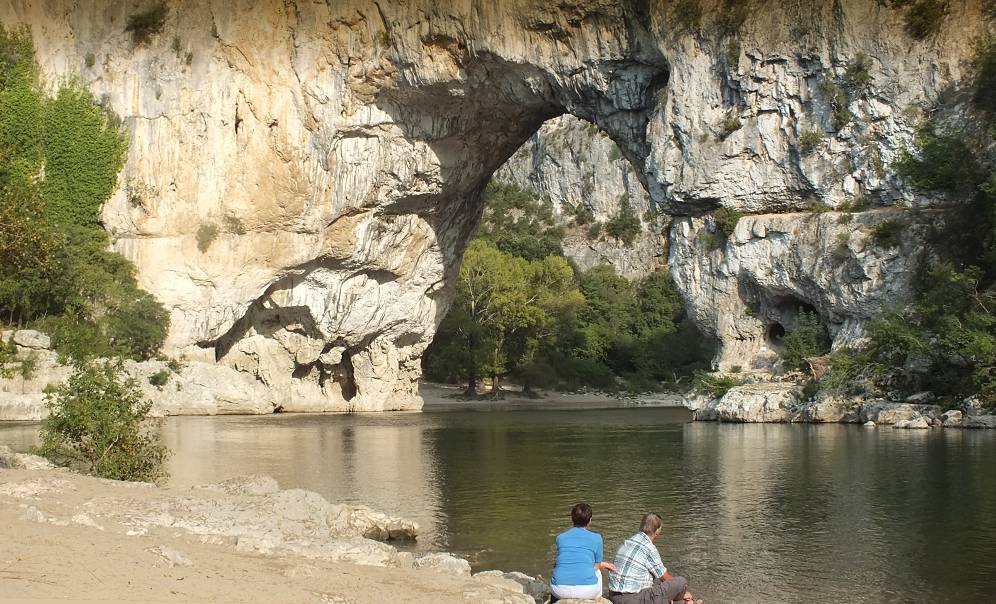 
West of the Rhone valley, and just a short distance from the main route from Paris to the south of France, the Ardèche  valley has some of the most spectacular and interesting sites in France. 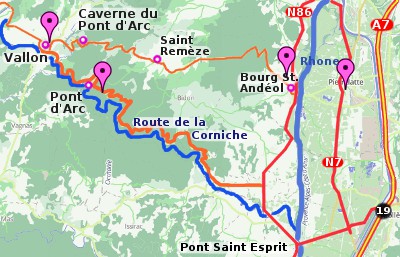 Access:
The Ardèche gorge, between Pont Saint Esprit on the Rhone, and Vallon Pont d'Arc, is most easily accessed from Exit 19 on the main Rhone valley A7 motorway. It can also be reached via the N102 from Clermont Ferrand, via Aubenas.


A selection of hotels in or near the Ardèche Gorge

The Ardèche garrigue, through which the river Ardèche has cut its spectacular gorge, is the northern tip of Mediterranean France which stretches up the Rhone valley.
The word "garrigue" designates a very dry limestone area, with an infertile rocky terrain on which the main vegetation consists of pine trees, scrub oak, vines  and aromatic plants. The Ardèche garrigue has all of these, but most notably a dense cover of small evergreen oaks and deciduous oaks. Here and there the natural forest has been cleared to make way for vineyards or lavender fields.
The Ardèche gorge road trip is a journey through this varying Mediterranean landscape, with plenty of things to see, including the spectacular Pont d'Arc natural bridge over the river Ardèche, the breathtaking Caverne du Pont d'Arc, with its unique cave paintings, a Lavender museum in Saint Remèze, and marvellous views from the Route de la Corniche de l'Ardèche, with its many stopping places and viewing platforms on the lip of the gorge. 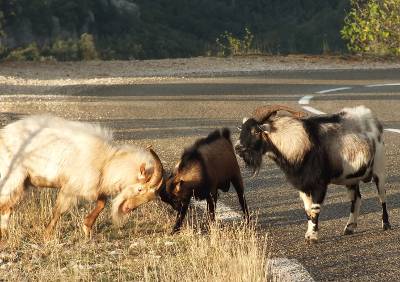 Wild goats beside the road on the Ardèche Corniche route.
Wildlife lovers may see eagles and other birds of prey, green lizards, or even some of the wild goats that now roam freely through the scrubland near the lip of the gorge. The goats are the descendents of flocks once tended by local farmers, in the days when goats were a source of income. Today there are few farmers still eeking out a living in this poor arid countryside, but the goats, left to their own devices, are very much at home.

Most visitors will approach the Ardeche gorge from the Rhone valley.  If approaching from the north, leave the A7 motorway at Exit 18, Montelimar south, and follow the N7 south as far as Pierrelatte. At Pierrelatte, turn west for Bourg Saint Andéol, the start of the Ardèche circuit.
Bourg Saint Andéol is a pretty and historic small town which was once a centre for the silk trade. In bygone centuries, the farmers of the Ardèche used to supplement their meagre farming income by breeding silk-worms, and to this day many an Ardèche farmhouse still has a few mulberry trees growing in the yard, a reminder of this former economic activity. The historic Palais des Evêques in Bourg Saint Andéol is a finely restored 13th - 18th century former bishop's palace with remarkable historic kitchens and some very fine painted ceilings.
Leave Bourg on the D4, following the signs for Saint Remèze and Vallon Pont d'Arc. Don't forget to stop about five kilometres out of Bourg to enjoy the fine view over the Rhone valley. This is an official stopping point and signposted as you come to it. There is a table d'orientation to show you what is what, from the peak of the Mont Ventoux to the south, past the Tricastin nuclear power station, and up to the Vercors to the northeast. You are now in typical Ardèche garrigue, with its stunted evergreen oaks and Mediterranean undergrowth.

View over the Rhone valley
For the next ten kilometres, the road runs through the oak forest before emerging into a more open countryside as it approaches the big village of Saint Remèze. You'll see lavender fields beside the road, best for colour in June and July, until they are harvested.
A kilometre before Saint Remèze, you may like to turn left onto the D201 for a visit to the Aven Marzel, one of the area's many underground caverns (open April - October inclusive). This spectacular cave has fine stalacmites and stalactites, a "dinosaur zoo" with lifesize models, and a museum of the underground world.
Another visit close to Saint Remeze is the lavender museum, 2 km southwest of the town, beside the D490; it is a small museum telling the story of lavender, and how it is farmed, harvested and made into perfume. 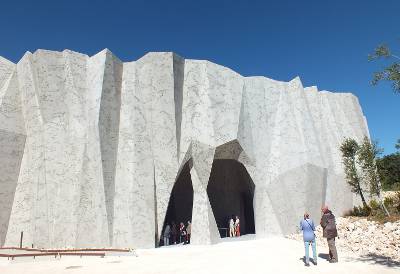 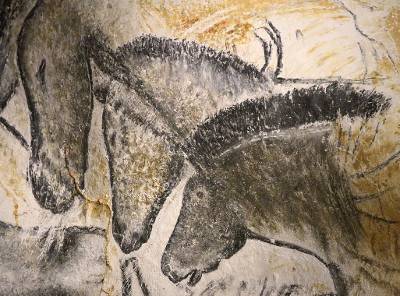 The Caverne du Pont d'Arc is a faithful replica of the astonishing Grotte Chauvet caves, a few kilometres away, which were discovered by pot-holers in 1994. The caves, a UNESCO World Heritage site,  contain the oldest and one of the largest collections in the world of prehistoric cave paintings. Painted as far back as 36,000 years ago, they are almost 20,000 years older than the paintings at Lascaux, and in a remarkable state of conservation, due to the fact that the original mouth to the caves was blocked off by a rock fall some 20,000 years ago. The original caves are not open to the public, in order to conserve the paintings in a pristine state. 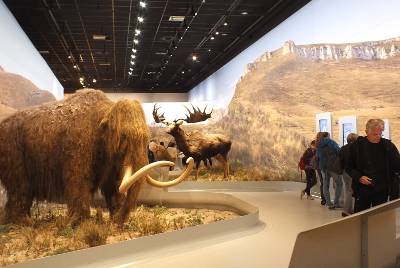 Wandering through the prehistoric museum.
The Caverne, which opened in 2015, contains a sophisticated and exact replica of the main parts of the Grotte Chauvet: the experience is totally authentic, and unless you knew that you were in a replica, you would imagine yourself deep underground in the original caves. All visits are with a guide, at a pre-booked time; for those who do not speak French, audio guides are available in half a dozen different languages.
Before visiting the Caverne (but after entering the site), most visitors will want to visit the prehistoric museum, which prrovides a lively and interesting insight into the life and ways of our prehistoric ancestors who lived in the Ardèche. As well as artefacts, the museum has lifesize replicas of the animals that roamed in the area in prehistoric times. Visitors wander among them as participants in reenactment of prehistoric times.

Vallon, the Pont d'Arc and the Corniche 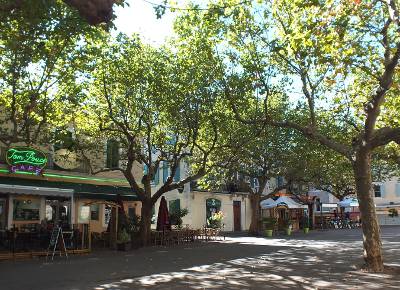 The main square of Vallon Pont d'Arc, with its cafés.
From the Caverne du Pont d'Arc, it is just a few kilometres downhill to the small town of Vallon Pont d'Arc, the traditional "capital"  for tourism in the Ardèche gorge. Vallon is a typically southern French small town, with narrow streets and a central square shaded by plane trees.
Vallon has long been the starting point for canoe and raft trips down the Ardèche gorge, and there are a number of opportunities to hire out canoes for the day or the afternoon; the canoe hire bases provide all the equipment, with a minibus service to bring you back to the base at the end of your trip. For most of the year, the Ardèche flows gently down through the gorge, and canoeing here is something that is accessible to all, beginners included.

The  Pont d'Arc
The highlight of the Ardèche gorge is undoubtedly the famous "Pont d'Arc", a huge and unique natural bridge over the river.... a reminder that many millions of years ago, this was an underground river snaking its way below the limestone plateau. Everywhere else, the roof has fallen in, leaving the gorge as we see it today. The Pont d'Arc can be viewed from the road just east of the site, but is far better seen close up, from the beach just to the west. From the spacious and well indicated car park, it is just a three hundred metre walk down to the beach. 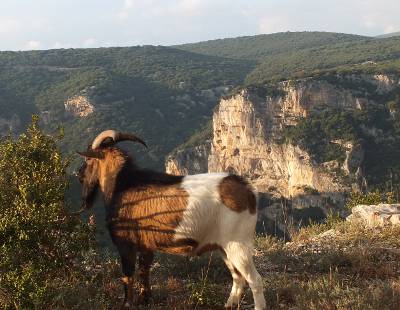 A wild goat admiring the view beside the corniche road
After the Pont d'Arc, the road climbs up out of the gorge, and becomes the Corniche route, a panoramic road that follows the northern lip of the gorge. Winding through the garrigue, this road was built in 1969 with the sole purpose of opening up the Ardèche gorge to tourism. It offers spectacular views down into the gorge, from a number of specially built observation points. From time to time, visitors may also come across some of the wild goats that live here, and are not too bothered about passing tourists.
Eventually, the corniche route comes to an end, as the river  flows out of the limestone massif, and towards the Rhone, which it joins at Pont Saint Esprit. But before leaving the garrigue, visitors also have the opportunity to take in another underground cave, the Grotte de la Madeleine (open April to October inclusive) located between the Corniche route and the gorge, a kilometre after the Belvedere de Gournier. The Grotte de la Madeleine has some of the finest stalacmites and stalactites of any cave in France, and the underground visit is an enchanting experience.
The Ardèche gorge scenic route comes to an end (or starts) at the small town of Saint Martin d'Ardèche, with its suspension bridge across the river. Located at the end of the canoeing trail that started in Vallon, Saint Martin is a small town with plenty of cafés, restaurants and campsites. From here, it is a short journey back to the starting point of the circuit at Bourg Saint Andéol, or else on to Pont Saint Esprit to rejoin the A7 motorway and on into Provence.

Discover more of France off the beaten track  ..... 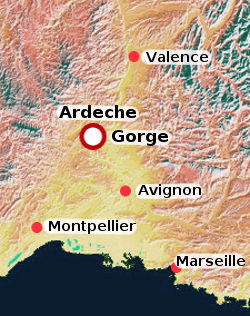 Ardèche cliffs in the evening sun