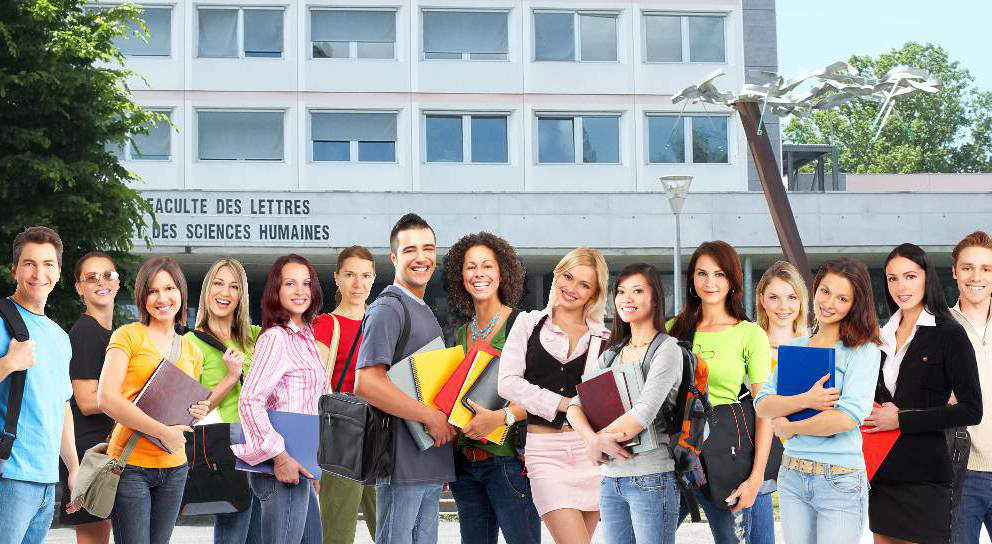 Going to university in France

► You are here:   France  ›
French life  ›
Studying in France
About-France.com - the thematic guide to France

Going to university in France ...

Most universities in the UK and the USA are run for profit on commercial lines, and many graduates emerge saddled with enormous debts. French universities  are run as part of the basic state education system, and for the great majority of students annual fees vary between 170 € end 243 €.


Fees are higher and more varied for specialist diplomas and other postgraduate studies, but generally considerably less than the fees charged by UK and American  universities.

Add to this subsidised student restaurants, cheap public transport, subsidised halls of residence, and what are you waiting for ? If you can get by reasonably well in French, there's a whole alternative university system waiting for you ! And in French universities there are no caps on student numbers, except in certain courses such as Medicine.   If you can't get by reasonably well in French, there are even some Masters taught largely in English (though fees may be a bit higher on these). Or else get learning French fast!!

Information below concerns universities: it does not concern "Grandes Ecoles", a peculiarly French system of specialist super-universities, most of which are both very expensive and selective.

Who can apply, and how?

But befrore you bin that UCAS form, weigh up the pros and the cons of packing up your bags and heading across the Channel for three years or more on the other side.

The Pros and the Cons of studying in France

One thing not to choose is "English"….. or at least, not unless your aim is to become a secondary school teacher in France or in England. The UK graduate teacher training programme currently recruits in French universities, so if you want to become a qualified secondary school teacher in the UK, you can get into the system with a degree from a French university as easily as with one for a UK institution.
If you have a bent for languages, and have A level in French and Spanish or French and another language, try "LEA" (Langues Etrangères Appliquées - Applied foreign languages), which is a joint degree course run in about 50 universities, and is basically two languages and business. The business content tends to vary from university to university, but it can be quite substantial, and graduates are well placed for applying for management jobs in the international departments of companies in the UK or France, or an MBA or a specialised masters course in the field of business. Here is a selection of links to university LEA departments: Aix-en-Provence, Avignon,  Besançon , Clermont Ferrand, La Rochelle.

Otherwise, if you are looking for an arts qualification, why not study for a degree in French (called "Lettres" in France) or (French) history. This is certainly a good preparation if you want to become a French teacher back in the UK; and even if you do not, your bilingualism will be a big asset if you complete your French degree with some short postgraduate professional qualification.

There's no point in studying law, unless you want to work in international law.

Economics courses tend to be far more theoretical than in the UK system.

Science courses are fine – but as with many courses in French universities, you may find yourself rather swamped in first year classes, which are often less specialised than in UK universities.

Medicine courses take at least five years, and though there are plenty of places in first year, the fight for places in second year and beyond can be serious!

Other subjects that can be studied equally well in the UK or in France include geography, sociology, linguistics, pharmacology, and various other less common disciplines.

ECTS and Brexit : In spite of Brexit, the UK has not left the  European Higher Education Area, and the European ECTS system, with international recognition of credits, will continue to apply. French credits remain valid in the UK, and UK credits remain valid in France. That at least is the theory, and a principle that French universities tend to respect.

Points to consider:
a) Transport connections   b) Size of university and town
Click here for list of French towns and cities ranked by population
Click here for an overview of Higher education in France

Transport
Almost all French university cities are easily accessible from the UK either by low-cost flight, or by Eurostar, with connections to the French TGV system at Lille. You can connect at Lille (same platform) to direct TGV's from Besançon in the east to Rennes in the west. But if you plan on driving back and forth to the UK, you'll be better off staying within 400 miles of Calais. that puts you within 8 hours drive of London. That puts the limit at an arc running through Strasbourg, Besançon, Dijon, Poitiers, Angers and Rennes.
Which university town ?
In short, the answer for most candidates will be "anywhere but Paris".
While a degree from the Sorbonne carries weight, getting into the Sorbonne can be hard, as Paris universities operate a redistribution system for excess candidates. You may apply for the Sorbonne, then be told you have to study at "Nanterre", a sprawling campus in the northern suburbs, between high rise housing estates and railway tracks. Paris has more than a dozen universities, most of them in the suburbs; so if you really want to study in Paris, apply rather to another central university (such as Paris III, good for languages), or to one of the more attractive suburban universities such as Creteil. And be warned, accommodation in Paris is not cheap! Even for students!
Try a provincial French university 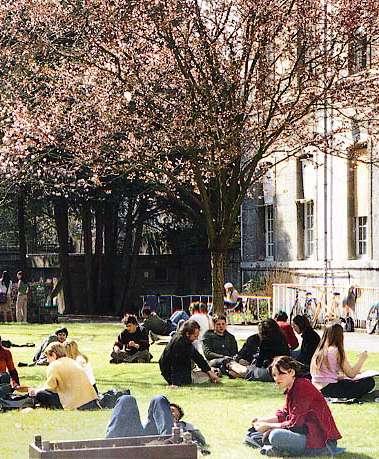 As a foreign student, you will find it easier integrating into French student life and society by enrolling in a provincial university. There are big universities in big cities like Lyons, Lille or Toulouse. There are big universities in medium-big  cities like Bordeaux, Grenoble, Montpellier, Rennes, Nancy and Strasbourg. And there are smaller universities in a lot of lesser known, but attractive, regional centres such as Aix-en-Provence, Amiens, Angers, Avignon, Besançon, Caen, Clermont Ferrand, Dijon, Orleans, Le Mans, Limoges, Nice, Pau, Poitiers, etc. In many respects, it is in the smallest university towns that integration is easiest.
Among the smallest and most user-friendly French universities are the university of La Rochelle in the Charentes, and Champollion university in Albi, Midi-Pyrenees.

A word of warning however… Universities in the south of France get a lot of applications from foreign students, and thus tend to be less responsive, and less generous in the way they treat them. There are accommodation shortages for students in many towns, and in recent years they have affected, among others, Aix en Provence, Montpellier and Grenoble.

So if you're interested, get onto the universities' websites, read up about them, write (in French) to the department you are interested in, and even go over and visit.
Let's build tomorrow's Europe today. What are you waiting for?

Differences between French and UK universities:

► A year in a French university

Information about Erasmus, as far as students from UK universities is concerned, is currently very uncertain as a result of Brexit.
While UK universities dearly wanted to continue with full participation in the Erasmus programme, the UK has left the Erasmus Programme, and the home-made Turing prgramme does not provide the same opportunities nor the same partnerships
However, UK students who wish to can always apply to a French university, going through the normal channels. With tuition fees a fraction of what they are in the UK, a year in a French university is likely to cost much less than a year in a UK university, even when no Erasmus funding is available.

In the absence of an appropriate departmental Erasmus programme, it is often possible for students to take up unused places available in other departments; but this is entirely discretionary, and each department and university has its own rules.

If you plan to study chemistry at university, but like the idea of a year in France, it is would be a good idea to find out first, and apply to a UK chemistry department that has an existing and operating exchange programme with a French university. Generally speaking, UK universities do not fill all the exchange places that they have negotiated with their French partner institutions.
Note that a year on an Erasmus programme is not a way of saving a year's UK fees; the principle of the whole Erasmus programme is that students always pay fees in their home institution, never in the host institution in which they spend a semester or a year.

Click here for an overview of the French Language

Before choosing a language course in France, you should ask the following questions:
1. Paris or provincial France?
2. Private school or course run by a university or an official organisation?
3. Course offering accommodation
4. Private tuition, or very small group, or traditional language school classes
5. Course offering just tuition, or tuition and cultural and sporting activities.

Paris or the provinces? Some of the relative advantages and disadvantages of studying in Paris are dealt with above. The disadvantages of Paris are far less when it is a matter of a short stay, and of course with language courses, it is you, the student, who will choose where to study. However, Paris is still a big city, still expensive, and if you are thinking of a summer course in August, remember that Paris can be very hot.

Private school, university or public organisation? Obviously, the choice of locations is far greater if you decide to choose a private school. Some are excellent, but others - notably those that just open for the summer months - may employ relatively inexperienced teachers. If you are thinking of choosing a private school, check its credentials first.
Apart from private schools, the best-known choice is the Alliance Française, the French equivalent of the British Council, which has been in the business of teaching French and French culture for generations. Then there are three or four reputed centres attached to universities; the Centre de Linguistique Appliquée  at Besançon, CAVILAM at Vichy, and the CAREL at Royan, on the Atlantic coast.
Schools situated in university towns and cities often have the advantage of being able to offer cheap subsidized student accommodation in halls of residence, notably during the summer vacation period.  There is also hostel accommodation available in most French cities.


For all other criteria, it is best to check out the individual websites of different schools.