About-France.com  the connoisseur's guide to France

French: one of the world's major languages

The status of French


History of French through the centuries

A “Romance" language, modern French is derived from Latin (as are Italian, Spanish, Portuguese and some other Mediterranean languages). Medieval French was one of the main historic roots of modern English, notably in terms of vocabulary.
Like all languages, French has evolved considerably in the course of time; the oldest known document written in a form of French, rather than late Latin, is the “Serments de Strasbourg", written in the year 842. In Medieval times, different forms of French flourished as the language of literature in both France and England: famous works from the time include the “Chansons de geste" (Songs of chivalry), notably the epic “Chanson de Roland", the Roman de la Rose (the Romance of the Rose), and the Arthurian legends (many written in French in England). By the time of the Renaissance, French had evolved to a point where writers such as Rabelais and Ronsard were writing in a language that is still quite comprehensible to a modern day educated reader; as for the great writers of seventeenth century France, Molière, Corneille and Racine, they remain quite understandable to this day.
Yet in recent centuries, change has been slower than with English, on account of the French Academy, the Académie Française, one of whose remits is to act as guardian of the French language. The Academy has frequently resisted changes to the French language, insisting that existing and traditional forms of the language were, by virtue of their existence, “correct French".

Franglais, and the influence of English

Nevertheless, though both the Academy and the French government have attempted on numerous occasions to preserve the perceived “purity" of French, modern French has been heavily influenced by English – or rather, by American – and thousands of English words have been brought into French by journalists, scientists, travellers, musicians, showbiz personalities, films, and street culture. Television chat-show hosts and their guests, businessmen and stars of all sorts pepper their French with words of English origin, which at first are quite incomprehensible to ordinary French speakers. This type of talk is known as “Franglais". One recent example, heard in a business context, is “une to-do liste" , which appears to have entered the French language in around 2007. Words like “le shopping" or “un parking" or “le hard discount" are now so well established in modern French that many French speakers do not even realise that they are borrowed from English.
Anti “Franglais" measures have had a few successes or half successes. After “un pipeline" entered the French language in the 1960s, the Academy banished the word, decreeing that the French word for an oil pipeline was “un oléoduc": and that is the word now used. But attempts to banish “email" have met with less success, and the purist’s alternative, “un courriel" has only managed to establish itself as an acceptable alternative to “email", used notably in official communications.
Among the reasons that have helped English make inroads into many languages is the ease with which English forms new words or adapts existing words to create new ones. Although French is a "synthetic" language (i.e. a language that makes great use of inflections - prefixes and grammatical endings ) it does not adapt words to create new meanings with the ease that English does. Just look at the complexity of the expression required to render the English word "anticlockwise" in French... dans le sens inverse des aiguilles d'une montre. Surprisingly perhaps, the English word in this particular case has not entered the French language in spite of its relative simplicity. This is no doubt because it is not everyday vocabulary, nor an erudite technical term.

Modern standard French is derived from the variety of French spoken in the area around Paris and the Loire valley area. It is the most important variety of the “northern" group of French dialects, known as the “langues d’oil"; but it is not the only form of French.
In the south of France, particularly in rural areas, there are still people who speak forms of Occitanian French, the “langues d’oc"; these include Provençal, Occitan, and Catalan. Strongly discouraged by central governments for over a century, and considered as “patois" these regional languages were fast disappearing until the nineteen-seventies, when the first significant attempts were made to revive them. Since then, there has been a major increase in awareness of regional languages and cultures in France, illustrated here and there today by road signs and street signs in two languages, and even occasional articles in regional languages in regional newspapers. The status of regional languages, as part of France's cultural heritage, is now enshrined in the French constitution.
However, while people in the Langue d’oc areas of France speak with accents that are distinct from the accents of northerners, and may understand local patois or dialects, only a minority can actually speak or write in non-standard versions of French.
French is also, of course, spoken in countries other than France. It is one of the languages spoken in Switzerland, Belgium, Canada, and a number of other countries. Swiss French and Belgian French are virtually identical to standard French; just a few differences existe. In Belgium and Switzerland, people say septante instead of soixante-dix for 70, and nonante instead of quatre-vingt-dix for 90. Some Belgians also say octante for 80, and the Swiss say huitante for 80.
In Canada, Quebec French has kept up several words and expressions that have fallen out of use in modern France; some notable examples are un breuvage instead of  une boisson (a drink), or une fournaise instead of une chaudière (stove, boiler).
Not all differences are due to historic factors. An amusing example of the difference between French and Québecois is the way to say "we parked in a car-park". In France this would be "Nous avons stationné dans un parking", while in Quebec it would be "Nous avons parqué dans un stationnement".

Linguists describe French as a moderately inflected or “synthetic" language, meaning one in which the grammatical function of words (notably verbs) is often indicated by suffixes and other markers.
While French has not kept the complex noun declensions of Latin, with its six cases (Nominative, accusative, dative, etc.), it has maintained a verb system characterised by inflected forms; verbs may have up to six different forms for a given tense, and for example the endings of many verbs in the present simple tense are -e, -es, -e, -ons, -ez, -ent (from first person singular to third person plural).
For this reason, French is a language where grammar (syntax), punctuation (or inflexion of the voice) and the form of words (morphology) are key factors in determining meaning; compare this to English, a more “analytic" language, where word-order and the use of link-words play a greater role in determining meaning.
For example: in French
Tu as vu la fille que j’ai rencontrée ?
is clearly defined as a question in written language by the presence of the quesiton mark, and in spoken language by an interrogative inflexion of the voice.
To ask the same question in English, it is necessary to use an interrogative verb form:
Did you see the girl I met ?
If an English writer forgets the question mark at the end, his sentence is still clearly a question, on account of the word order. But if a French writer forgets the question mark, the sentence reverts to being a statement.
Another example: in French,
“Commençons" – a single word –
has the meaning conveyed by three words in English: “Let’s (let us) begin".

As it is important for conveying unambiguous meaning in French, basic grammar is something that needs to be mastered by anyone wanting to communicate effectively in this language. Thus, although teachers in France often lament the falling standards of grammar among their pupils, the teaching of French grammar has remained an essential part of the school curriculum, from primary school upwards.

The Vocabulary of French

Being largely derived from Latin (with the addition of modern vocabulary from English) the French language has a lot less words than the English language (which is derived from both Old French and old forms of German).
Here are some examples to illustrate how French is derived from Latin:
It is impossible to say just how many words a language has, as it depends on how one defines what constitutes a word. For example, are nation, national, nationalize, nationalism four words, or one word with four forms? Is foot one word or three ? A thing with five toes, twelve inches, and the bottom ?
For this reason, it is unwise to say how many words the French language has; however, by consensus, and using the same yardsticks of measurement, it is generally suggested that French has between 30% and 45% less words than English.

Printer-friendly page
You may also like
About-France.com's
Online French grammar
A well illustrated and freely accessible grammar for students of French

Shop from France, fashion,  souvenirs, food and wine and more. 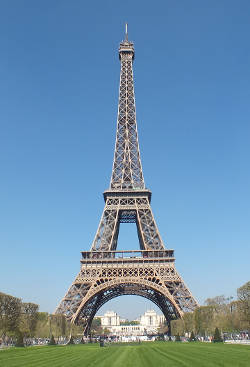 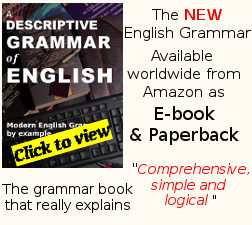