Past tenses in French, 2

The imperfect and pluperfect tenses in French


In addition to the two main past tenses, the preterite and the composite past, French has two more tenses to express actions in past time, the imperfect and the pluperfect.
Generally speaking, these correspond to the past progressive and past perfect in English, but their uses are not quite the same.

The imperfect tense in French is used to express ongoing or lasting action in the past. In this it corresponds to the past progressive in English (i.e. I was reading); it also corresponds to the English tense structure with used to.

However the French imperfect tense is used much more frequently than the English past progressive, as it is also used to express continuing or repeated actions in the past that, in English, would be expressed by means of the preterite. See examples 2 and 3 below.
This is notably the case for verbs that intrinsically imply duration, such as savoir, connaître, vivre, etc., for which the imperfect is a very common, if not the most common, past tense in French.

One common use of the imperfect is in sentences that relate two past events to each other, one expressing an ongoing situation, the other a specific action. See examples 7 and 8 below.
In cases where two related past events both imply duration, in French both verbs will normally be in the imperfect. In English, by contrast, only one of them - and sometimes neither of them - may be expressed using a verb in the past progressive - notably when the verbs intrinsically imply duration. See examples 9 and 10 below.

Just occasionally, the imperfect is used as an alternative to the preterite, as a past narrative tense; in this usage it is sometimes referred to as the picturesque past, le passé pittoresque, and was used as a technique of style by writers such as Georges Simenon and Mario Ropp.


Examples:
1. Je blaguais.
I was joking
2. A l'époque, la maison m'appartenait.
At the time, the house belonged to me.
3. Il achetait souvent des livres rares.
He often bought rare books .
4. Au moment de l'accident la voiture roulait très vite.
At the time of the accident the car was going very fast.
5. L'homme travaillait souvent dans son jardin très tard le soir.
The man often used to work in his garden very late in the evening.
6. J'allais vous dire que je reconnaissais cet homme.
I was going to tell you that I recognised that man.
7. Je suis tombé de mon vélo alors que je sortais du garage.
I fell off my bike as I was coming out of the garage.
8. Je somnolais quand j'ai entendu le réveil
I was snoozing when I heard the alarm.
9. Quand nous vivions à Paris nous n'avions pas de voiture.
When we were living in Paris we didn't have a car. 10. Je ne savais pas qu'il parlait russe.
I didn't know  that he spoke Russian.

The pluperfect tense in French is used to express action in a distant past.
One common use of the pluperfect is in sentences that relate two historic past events to each other, where one of the events took place further in the past than the other. In this situation, the French pluperfect corresponds to the past perfect in English.

However French can also use the pluperfect in some cases where English would use the preterite or present perfect: in these instances, the function of the pluperfect is simply to imply an action that is very much in the past, and long since terminated. See examples 5 and 6 below.

The pluperfect is also used in past reported speech, to report a statement originally expressed using the composite past. See examples 7 and 8 below.

For all verbs, the pluperfect tense is formed with the imperfect of avoir (or in specific cases of être),  followed by the past participle:


Return to Verb tenses 1: the preterite and composite past 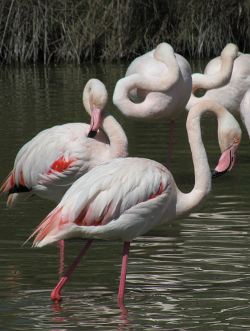 Flamingoes in the Camargue wetlands

About-France.com does not collect any data from users. Cookies are used only to track anonymous audience statistics and to enable certain essential page functions. To remove this message, click or get more details