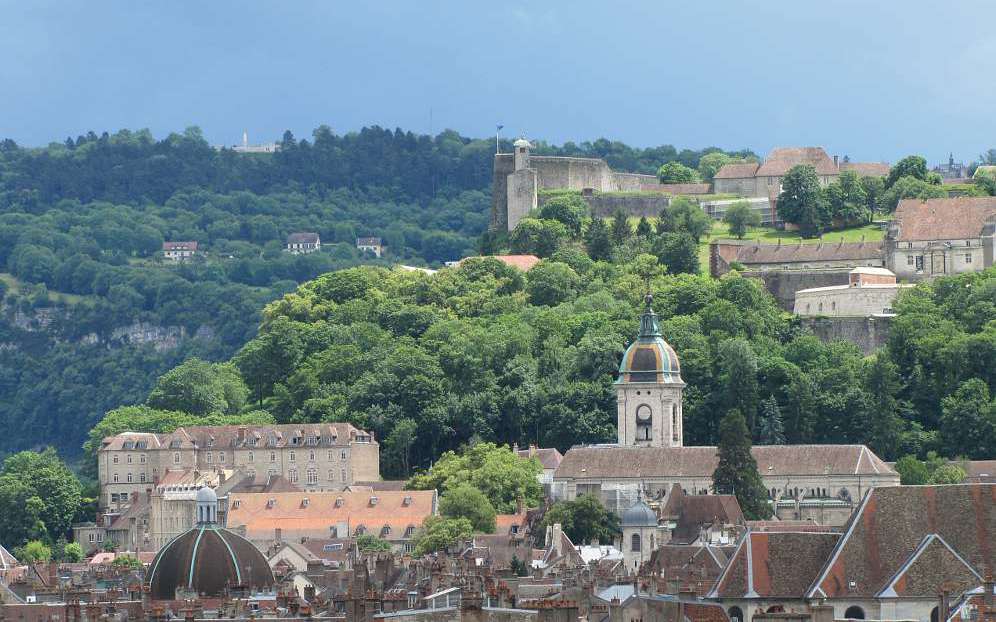 From the Vosges to the Jura

A short guide to Franche-Comté

The Franche Comté region is a beautiful rural area of eastern France that has a lot to offer in terms of natural environment, historic heritage, museums and sites. Lying between Burgundy and Alsace, and between Champagne and Switzerland, it is possibly the most underrated of all French regions, in terms of tourism and holiday potential.


►Hotels in Besancon
Franche-Comté can essentially be divided into two areas; the area to the north and northwest of the Doubs valley, and the area to the south and southeast. The northeasterrn part, essentially the department of the Haute Saone (70) is  a deeply agricultural area, with small towns and villages, low hills and valleys, but rising into the foothills of the Vosges mountains to the east. The rest of the area,  between the valley of the river Doubs and the Swiss border, covers the French Jura mountains, whose landsapes of hills, meadows and spruce forests have become the iconic images of this largely rural area.
In the centre of the region, between the Haute-Saône and the Swiss border is the department of the Doubs (25), consisting of a series of plateaux and hilly ridges rising from 200 metres in the north to 1200 metres on the Swiss border. In the south of the region, the department of the Jura (39) is divided into plain and mountain areas, as it covers part of the broad flat Saône valley, plus the central part of the Jura mountains, peaking at over 1500 metres on the Swiss border. Finally, in the north of the region lies the smallest of all French departments (except Paris), the territoire de Belfort, an area that was for centuries the French-speaking part of Alsace. This department is quite industrialised, and the area round Belfort and Montbéliard is the home of the Peugeot car group.

View across the rooftops of old Besançon, to the Cathedral and Vauban's citadel (UNESCO world heritage site)
The capital of Franche-Comté is Besançon, a historic city nestling beneath its ancient citadel in a loop formed by the river Doubs. In terms of townscapes, Besançon is one of the hidden jewels of France. The city centre is largely undamaged by the insensitive development that razed the historic quarters of many French cities in the 19th and 20th centuries; it is composed mainly of old stone-built houses, with a fine selection of 18th century urban residences. The town boasts the oldest, and one of the finest, public art galleries in France, with an impressive collection of old masters and 19th century French art, including works by Cranach, Titian, Bellini, Rembrandt, Rubens, Zurbaran, Goya,  Fragonard, Courbet, Bonnard, Renoir, Matisse and many more. It has been nicknamed the "petit Louvre", on account of the richness of its collections.
Besides its Musée des Beaux Arts, the city has two other major museums, the Museum of time, housed in the 16th century Granvelle Palace, a jewel of the French renaissance, and the museum of the Resistance and the Deportation, one of a number of museums and sites in the Citadel, a stronghold fortified by the great military architect Vauban in the 17th century, and classed as a UNESCO world heritage site in 2008. There is also a fine cathedral, the birthplace of Victor Hugo, and river cruises. 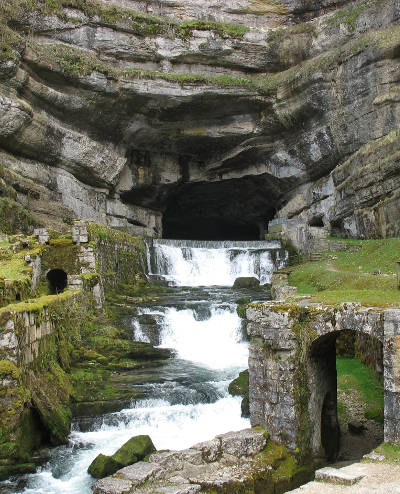 The source of the River Loue - which emerges, already a river, at the foot of a deep gorge
The Franche-Comté region likes to promote itself as a haven for "green tourism" or nature tourism; in hot summers, when much of France turns brown and dry in the heat, Franche Comté almost always remains green and inviting, refreshed as it is by the summer storms that sometimes brew up late in the afternoon . In the Haut Doubs and Haut Jura area, running along the Swiss border, the meadows remain green and full of flowers; this is a great area for camping hiking and mountain biking, or even for sailing on the lakes. And in winter time, there is plenty of opportunity for nordic skiing and even downhill skiing, as Franche Comté has two fully equipped resorts.
This is an area famous for its agricultural products, notably the famous "Comté" cheese, very similar to Swiss Gruyère, and smoked sausages. It is also famous as France's watchmaking area - watchmaking being an industry that is still active either side of the Swiss border. Franche Comté is also the home of France's optical glasses and spectacle industry, and the town of St Claude in the Jura is famous for its pipes. In the north of the region, the area around the towns of Montbéliard and Belfort is the heartland of the region's most famous company, Peugeot, which has a major production unit at Sochaux.

Regional specialities: Like many mountain regions, Franche-Comté boasts plenty of delicious regional specialities; among the most famous are its cheeses: of these, the most famous is Comté (pronounced contay) cheese, similar to the Swiss Gruyère cheese but with its own distinctive taste. This has recently become the most popular cheese in France, in spite of the fact that it remains produced in farms and rural dairies (known as fruitières) using an age-old traditional process. Other cheeses from this region are Mont d'Or - also called Vacherin - Morbier, Bleu de Gex (see About-France.com Cheeses page).
Apart from its cheeses, Franche-Comté is renowned for other gourmet delights, notably its charcuterie: Morteau sausage, a smoked mountain sausage that can be boiled or grilled; Montbéliard sausage - similar but smaller; mountain ham. As for wines, Franche-Comté has them too : Arbois and Côtes du Jura are the great regional AOC wines, and Arbois white is especially distinctive, when made from Savagnin grapes. The Jura also produces a very special aperitif wine, called Vin Jaune; the most famous vin jaune comes from Chateau Chalon, a village that is one of the most attractive in eastern France..

Access: The regional capital of Franche-Comté, Besançon, is accessible by direct TGV train from Paris (2h 30) or from Strasbourg, Lyon or Zurich. The region is crossed by motorway routes to southern France and Switzerland. The region has no airport, but three airports just outside Franche Comé are served by Easyjet from the UK, and flights from many other cities in Europe; Basel-Mulhouse Euroairport in the north, Geneva Cointrin in the south, and Lyon St. Exupéry in the south west. 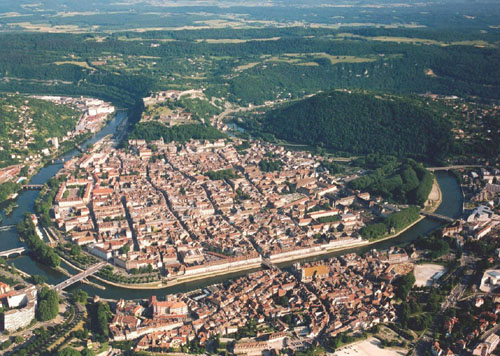 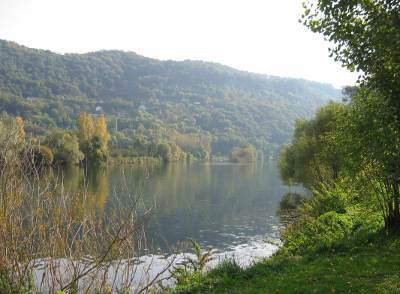 Valley of the river Doubs, near Besançon

Franche Comté - made famous to UK TV-viewers as the birthplace of celebrity chef Raymond Blanc - who hails from the village of Saône, just outside Besançon -  consists of four departments, Doubs, Jura, Haute-Saône and Territoire de Belfort 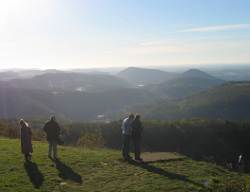 Autumn day on the summit of Montfaucon,
just outside Besançon.

Ornans in the Loue valley, near Besançon 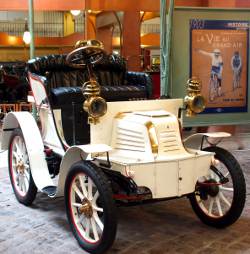 In the Peugeot motor museum, Montbéliard 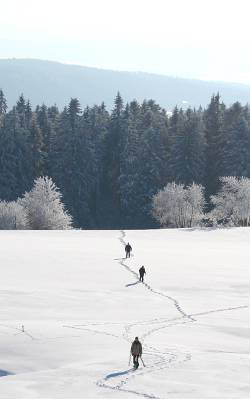 Winter sports in Franche-Comté - Nordic skiing in the Haut Doubs