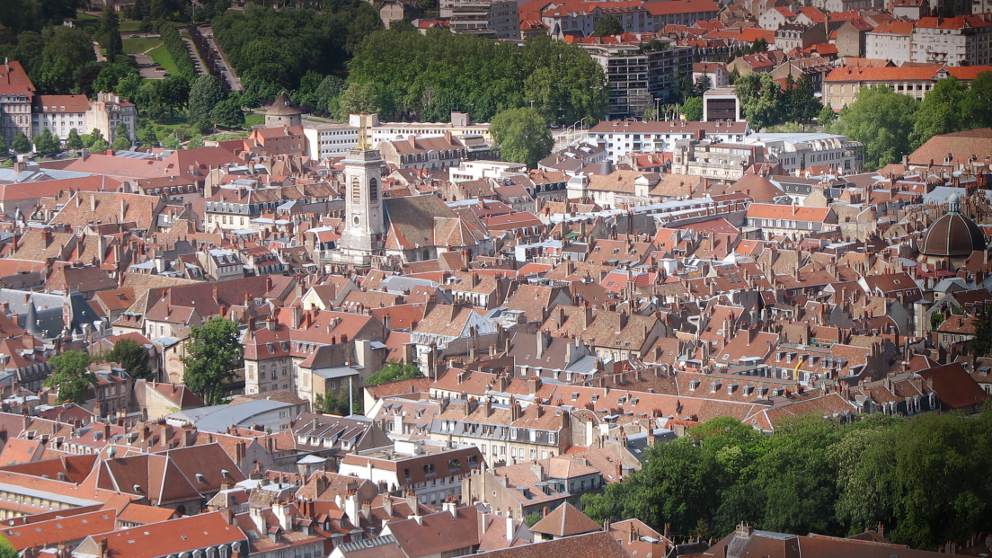 Discover Besançon:  things to see and do

► You are here:   France  ›
Heritage cities  ›
Besançon
About-France.com - the thematic guide to France

Besançon - the jewel of eastern France

Cradled in a loop of the river Doubs, at the foot of its towering citadel, the ancient city of Besançon is one of the best preserved historic cities in France.
In pre-Roman times, it was the capital of an area known as Sequania. When the area was conquered by the Romans, Julius Caesar described this naturally defensive site as "the jewel in my crown". Today Besançon is the capital of the region of Franche Comté, a thriving university town, and one of the more popular places to visit in eastern France.
The centre of Besançon, known as "la Boucle", i.e. the loop of the river, is both a very well preserved historic quarter, with no high-rise blocks or inappropriate modern developments, but also remains the commercial and business hub of the city, with plenty of shops and restaurants.

The Roman "Porte Noire", recently renovated, and
behind it the cathedral
Besançon, capital of the Franche-Comté region, has a wealth of tourist attractions. The most visited of these is the Citadel - a UNESCO World Heritage site - a magnificent example of seventeenth-century military architecture, designed by Vauban. The imposing Citadel stands on a massive rock - sheer on both sides - that blocks the entrance to the loop of the river Doubs. As well as being an important historic monument in its own right, the Citadel contains a number of museums, including a folk museum, a museum of the Resistance and the Deportation, an insectarium, and a zoo.
Visitors driving or walking up to the Citadel pass by Besançon's St. Jean cathedral: built on the groundplan of an earlier Carolingian cathedral, with an altar at both ends, St. Jean's is a fine medieval cathedral which also houses one of the great works of the Florentine Renaissance master Fra Bartolomeo, as well as a great astronomic clock, a fitting nineteenth-century monument to Besançon's past glory as capital of the French clock and watchmaking industry. Just outside the cathedral is the Porte Noire, a Roman triumphal arch that is the principal vestige today of the Roman city that once stood on the site. 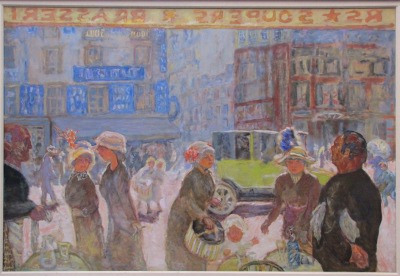 Bonnard's Café du Petit Poucet - Besançon, musée des Beaux Arts
MUSEUMS     The town centre of Besançon boasts two impressive museums; The most important of these is the city's Musée des Beaux Arts, one of the best and oldest provincial art galleries in France. Standing on the old market square, the museum - entirely rebuilt in the nineteen-sixties - contains a rich collection of paintings and historic artefacts. These include Egyptian mummies, Roman bronzes and mosaics, and medieval sculpture, as well as a major art collection with - among many others - works by Cranach, Bronzino, Bellini, Reubens, Zurbaran, Goya, Fragonard, Courbet, Renoir, Bonnard, Signac, Marquet and Picasso. The layout of this museum, designed is such that the visitor is taken effortlessly on a coherent journey through the history of art in a manner that is quite impossible in larger museums such as the Louvre.
Unfortunately, the museum is closed for full renovation, and will not reopen until late 2018 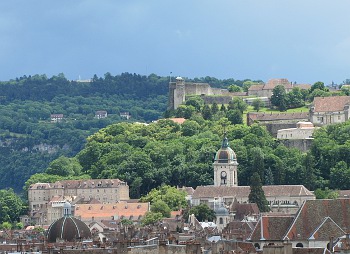 View across the old city, to Vauban's citadel
Besançon's second important museum is the Museum of Time - a legacy of the city's watchmaking tradition - that is housed in the Renaissance Granvelle palace. The palace itself is one of the finest Renaissance town houses in France, built for Cardinal Granvelle, who was chancellor to the Hapsburg emperor Charles V. It houses not only the museum of time - with its static and interactive exhibits - but also a fine collection of seventeenth-century Bruges tapestries depicting the life of Charles V, still hanging in the room for which they were originally commissioned.
Other attractions in Besançon include boat trips on the river Doubs, that take visitors round the historic city centre and through the canal tunnel under the Citadelle, and the birthplace of Victor Hugo - close to the Porte Noire. Hugo - reputed France's greatest poet - was born in Besançon, where his father was posted, though his family was not from the region.
One very fine building, which is most often misssed by visitors, is the late 17th century St Jacques hospital, some 500 metres west of the city centre (Place du 18 septembre). The original colonnaded building stands round three sides of a large quadrangle, and is still part of the Besançon University Hospital. It contains one of the finest 18th century pharmacies in France, preserved as a museum.
The whole of the old centre of Besançon - the central area of which is pedestrianised - is a delightful urban environment that has survived more or less intact against the onslaughts of modernism; the old streets are lined with houses and buildings from the Renaissance to the early twentieth century, built in the local two-coloured limestone. The city centre is also the starting point for a number of well-marked hiking trails up and down the valley, and to the hills around the city.

The Franche Comté region has masses to offer; firstly its countryside and natural environment of forests, hills and valleys. The area also contains plenty of places that are worth a visit.
Ornans : Southeast of Besançon, a twenty-minute drive from the city, lies Ornans, birthplace of the 19th century painter Gustave Courbet. Ornans is in a beautiful natural setting, in the steep valley of the river Loue. The town has a recently renovated and very interesting Courbet museum, in the artist's birthplace.
Arc et Senans  Southwest of Besançon lie the Royal Saltworks of Arc et Senans - designed in the eighteenth century as an ideal city, by the visionary architect Claude Nicolas Ledoux. The Royal Saltworks have long been classed as a UNESCO World Heritage site.
Nancray, east of Besançon, visitors can admire the Museum of Comtois houses, a living history open-air museum housing an ever-increasing collection of traditional houses and rural buildings from the region that have been carefully dismantled and rebuilt at Nacray.
Gouffre de Poudrey. south of Besançon. Massive underground cavern, with impressive stalactites and stalagmites.
Loue gorge and source de la Loue. A deep chasm cut into the limestone rock of the Jura, at the head of which the Loue emerges as a filly-fledged river from a cave at the foot of a cliff.

Click here for a ► choice of hotels in Besançon at best online rates, and the About-France.com hotel selection for Besançon.
Besancon has plenty of hotel accommodation. In the town centre, most of the hotels have car parking facilities, though it may be limited. The centre is a pedestrian zone, but hotel access is of course permitted. Town centre accommodation can be recommended to visitors staying for a couple of nights or more, as everything in the town centre, museums, cathedral, citadelle, river cruises, can be easily reached on foot.  Alternatively, hotels on the outskirts of town and near the railway station are close to bus or tram routes; and Besançon is reputed as having one of the best urban public transport systems in France. Hotels beside the city station, Besançon Viotte, have tram access to the centre... though it can also be easily reached on foot.

Its location at the crosssroads of two major trans-European routes has always made Besançon a strategic city. It stands at the intersection of the Rhine-Rhone corridor and the historic main route between Rheims and Milan - or the UK and Switzerland.  Today it is located at the intersection of the A36 Mulhouse-Beaune (Germany-Spain) motorway and the N57 - N83 route from Nancy to Lyon, as well as on the shortest route from the UK to the Swiss cities of Lausanne and Neuchâtel. Besançon is also on the Rhine-Rhône high-speed rail line.

Photo top of page : the old city, from the top of Chaudanne hill

Find and book hotels in and near Besançon. See full list and best rates with Booking.com

The About-France.com selection
Hotels for all budgets and all needs
★★★★ Hotel Mercure
Facing a riverside park, beside the tourist office. Easy access to town centre.  Free parking

★★★ Ibis La City
Beside the river, next door to the CLAB, the reputed French language school

★★★ Hotel de Paris
Right in the centre of the old town, easy access to all sights. Limited parking.

★★★  Best Western Citadelle
At the foot of the Citadelle, with easy pedestrian access to town centre..

Virgin with saints, by the Florentine master Fra Bartolomeo, in Besançon's cathedral

Aerial view of Besançon - based on a public domain photo.