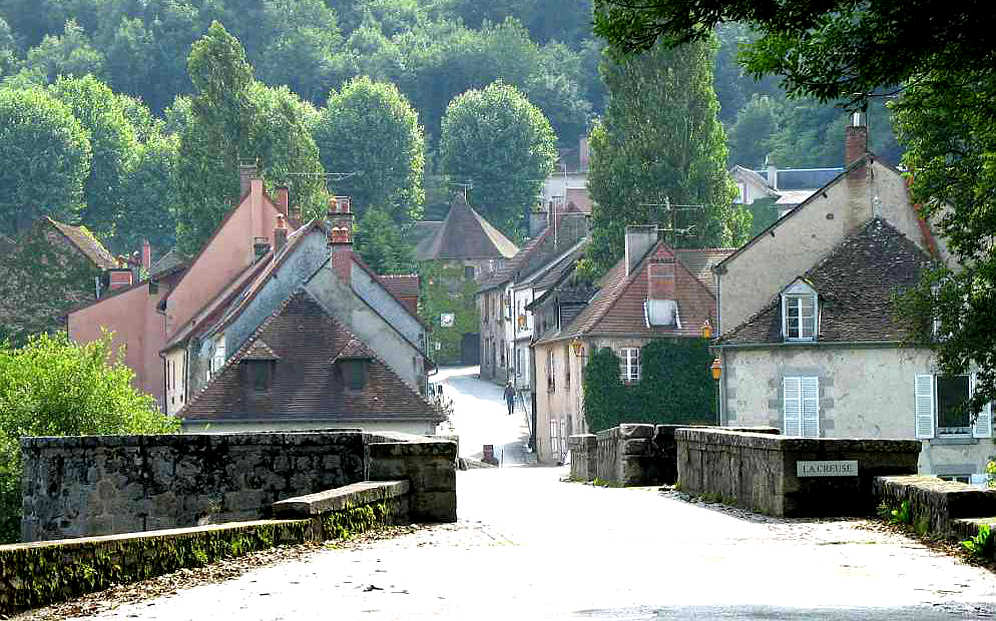 The Limousin  and its tourist attractions

You are here :
France  ›
Regions of France  ›  Limousin
About-France.com - the thematic guide to France 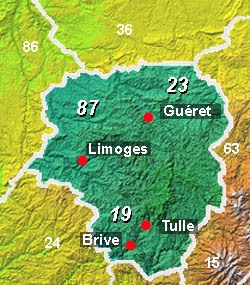 The Limousin area and former region is made up of just three departments, the Haute Vienne (87), capital Limoges, the Creuse (23), capital Guéret, and the Corrèze (19), capital Tulle. Lying  between altitudes of 200 metres and 1000 metres, the Limousin is mostly a region of hills and valleys and low mountains. The highest point in Limousin is the Mont Bessou, 977 metres, near Ussel, in the Corrèze department; it is the highest point of a large upland area, a part of the Massif central known as the Plateau de Millevaches, which borders on the higher areas of the neighbouring Auvergne region.
The only town of any size in the Limousin region is the city of Limoges; with about 140,000 inhabitants, and an urban area of almost 300,000 inhabitants, greater Limoges provides about half of all the jobs in the region - which gives a good idea of how depopulated the rest of the region is. Until the turn of the millennium, the Limousin, part of the "empty France" area, was a region that had been losing population for a century or so; that decline has now been halted, thanks largely to an influx of people from outside the region, in from Britain and Holland, seeking a quiet location in which to settle. The region's second city, Brive la Gaillarde, has just under fifty thousand inhabitants; it is the biggest town, though not the departmental capital, of the Corrèze department, the southernmost of the region's three departments. Apart from Limoges and Brive, no town in the Limousin has more than 20,000 inhabitants; towns such as Tulle, Aubusson and Guéret are small market towns that have grown little in the last century.
Once a Roman city, Limoges, lying on the river Vienne and on a main route between Paris and Toulouse, has always been a major centre, in this relatively sparsely populated region. In the Middle Ages, it was renowned as a centre of arts and culture. In the nineteenth century, it became famed throughout Europe, and beyond, for its porcelaine; indeed the city became rich with its porcelaine industry, and much of the city centre dates from this period. Limoges has a large historic quarter, with narrow streets and many fine half-timbered houses.
Brive-la-Gaillarde, on the river Corrèze is an attractive small city, with a historic centre built in the pale honey coloured local stone. Brive is also the most important centre in southern Limousin on account of its position as a communications hub, being the point where the east west route between Lyon and Bordeaux (A 89 motorway) crosses the north-south route between Paris and Toulouse (A20 motorway) . Tulle, a few miles up the Corrèze, is a small manufacturing town that has given its name to a type of fine loose meshed lacy fabric, used in the clothing industry. The town rises up the steep sides of the narrow river valley. Aubusson, in the Creuse department, is another textile town, famed worldwide for its tapestries; Aubusson tapestries were famous from the15th century onwards, but the industry declined in the early twentieth century, until it was relaunched in the late 1930's by Jean Lurçat, reputedly the greatest tapestry designer of the 20th century. 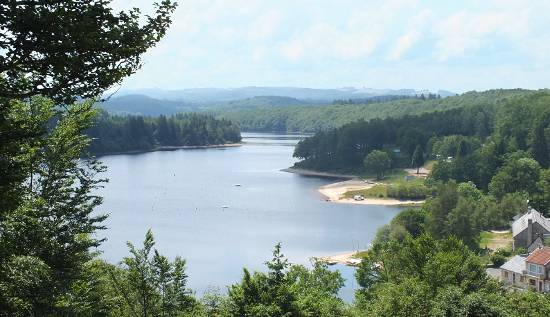 The Plateau de Millevaches, in the Corrèze - fields, forests and lakes

The adjective "rural" is a bit redundant when qualifying Limousin. Apart from the Limoges area, which has half of the region's population, Limousin is virtually synonymous with rurality. Limousin is among the least densely populated areas of France.
Rural Limousin is a land of deciduous woods and fields in the west and northwest, of sheep grazing land in the north, and an upland area of spruce forests and grazing land on the Plateau de Millevaches (the plateau of the thousand springs, not the thousand cows - there are many more than that!) in the east. In the south west, the region borders the Dordogne; the river Dordogne itself cuts through the south west of the region, after several kilometres where it, in its steep wooded valley, it forms the border with the neighbouring region of Auvergne.
Forming the north-western edge of the Massif Central, Limousin is a region that is relatively well watered, particularly in the east.  The south-western part of the region, including the area round Brive, can be hot in summer.

Stay in the Limousin : some ideas 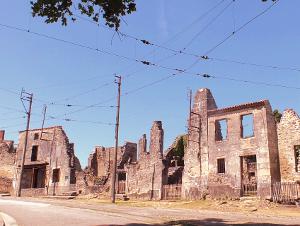 Oradour-sur-Glane - frozen in time since 1944 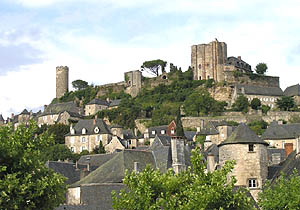 The village of Turenne 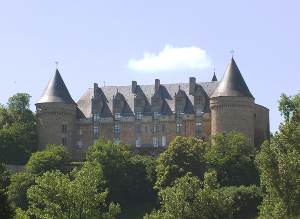 The chateau at Rochechouart


About-France.com   Home page -  Site search  -  Regions  -  Maps of France  -  Contact
More information : ►      Official Limousin tourism site
Limousin – occupying the north western part of the Massif Central – is one of the smallest regions in France, and the one with the smallest population. The name derives from the regional capital, Limoges, and in one form or another has been taken worldwide to describe a type of motor car, and a famous breed of beef cattle. The cattle originate from this region, the cars do not.

Rural calm; Ahun, in the Creuse. 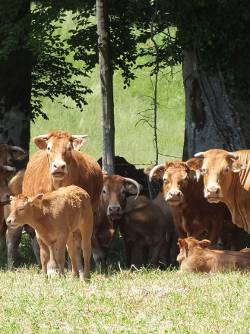 Limousine cattle - one of the finest breeds 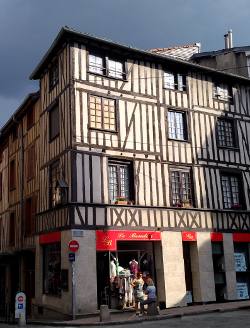 The old quarter of Limoges 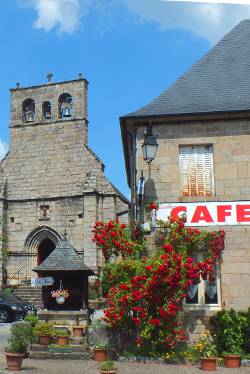