Mountains and dales of Limousin, Auvergne and Occitania

About-France.com - the thematic guide to France


The Massif Central - the uplands of central southern France 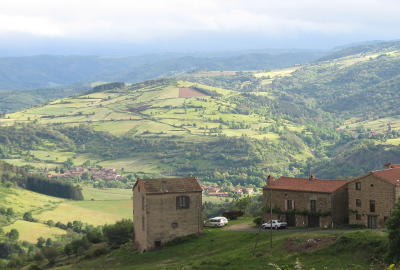 The High Allier, in Haute Loire
Covering some 85,000 square kilometres, the Massif Central is the largest upland area in France. Culminating at the Puy de Sancy, 1885 metres, some 30 miles southwest of Clermont Ferrand, it is also the third highest mountain range in France.  It stretches over 200 miles from north to south, and about 175 miles at its widest point from east to west.
While the Massif Central is undeniably a continuous area of upland, the name was not invented until the start of the 20th century. Until the arrival of the first railways, it was such a remote and isolated area of France that few people apart from pilgrims ever crossed it from north tosouth, and even fewer from east to west. Besides, crossing the Massif Central in winter was impossible, or at least very risky, in the days before the start of global warming. Few people in France knew this mountain area, and those who did knew only their part of it. So before the 20th century, the area was known not as a whole, but by its constituent parts - the Auvergne, the Velay, the Vivarais, the Cevennes, the Lozère, the Causses, la Margeride,  la Montagne Noire, the Rouergue, the Lévézou, the Quercy, the Monts de la Marche, the Monts du Limousin, and many other smaller areas.

The eastern and southern edges of the Massif Central are clearly defined by the Rhône valley and the Mediterranean coastal plain. On its northern and western marches, the Massif Central slopes gently away towards the Loire basin and the plains of the southwest.
The expression Massif Central does not correspond to any strictly defined area. It is not an administrative area, nor a historic region. However it is considered as an area in terms of regional planning, and there are certain interregional agencies and bodies, including a Masssif Central highways agency, that cover the area. The regional planning and development agency includes the Morvan hills in Burgundy, while the Massif Central highways agency's territory stretches south from Clermont Ferrand as far as Béziers, ten miles from the Mediterranean coast.

The Massif Central is a profoundly rural part of France, and includes the two least densly populated departments of metropolitan France, Lozère, with just 14 people per sq.km, and Creuse with 22 inhabitants per km². The whole area has just three large cities, Saint Etienne, Clermont Ferrand and Limoges, all of them lying on the edge of the area.  In the heart of the Massif Central, there are only two towns, Aurillac and Greater Rodez,  with more than 30,000 inhabitants, and only five with over 20,000 inhabitants. The Massif Central is an area of wide open spaces, small towns and villages, hamlets and isolated farmsteads. 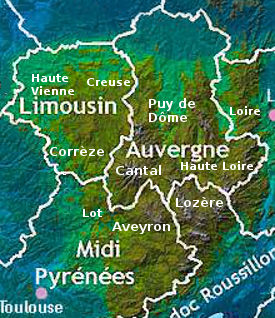 Regions and departments of the Massif Central
In topographical terms, the Massif Central is land lying mostly at above 500 metres, and includes most of the regions of Auvergne and Limousin, plus parts of the regions of Rhone-Alpes, Languedoc, and Midi-Pyrenees.  The core upland area of the Massif Central can be said to include ten departments: Puy de dome, Cantal and Haute Loire (Auvergne),  Creuse, Corrèze and Haute Vienne (Limousin), Loire (Rhône alpes), Aveyron and Lot (Midi Pyrénées), and Lozère (Languedoc Roussillon). It also includes sizeable parts of the departments of  the Ardèche, the Tarn and the Tarn et Garonne, and smaller parts of other neighbouring departments.
It is home to three well-known breeds of cattle, Limousins, Aubracs and Salers, and to the Lacaune sheep that produce Roquefort cheese. The highest parts and the high plateaux are summer grazing land for cattle, and in the south for sheep, while some 35% of the territory of the Massif Central is forested.

Find and compare
best car-hire rates in France
from a choice of suppliers
Formerly one of the least accessible parts of France, the Massif central area is now crossed north-south by two motorways, the A20 between Limoges and Toulouse, and the A75 from Clermont-Ferrand to Béziers; the northern part of the Massif-Central is crossed east-west by the A89 Lyon - Clermont-Ferrand - Bordeaux motorway: there is another trunk route across the Massif Central, the N88 which runs from Lyon to Toulouse, via Le Puy en Velay, Mende and Rodez.
There is fast rail access from Paris (intercity expresses, but no TGVs) to Clermont Ferrand, in the Auvergne, and Limoges and Brive la Gaillarde  in the Limousin. The area has four international airports. Clermont Ferrand, with scheduled flights to and from the Netherlands and Belgium, and Rodez, Brive la Gaillarde and Limoges which are served by seasonally operating low-cost carriers from the UK.


Tourism in the Massif Central 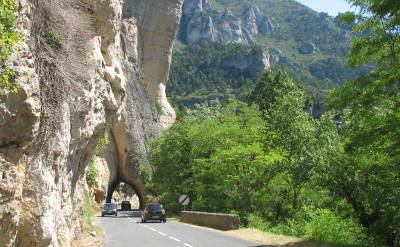 Dramatic driving in the gorges du Tarn - Lozère
The Massif Central is particularly appreciated for its magnificent natural environment, its rivers, forests, lakes and mountains, its wildlife, and its peace and quiet. With hundreds of kilometres of marked trails, it is very popular with hikers and ramblers. The mountains are crossed by several long-distance footpaths, notably by the Santiago trail (GR 65), which starts out from the small cathedral city of Le Puy en Velay; but there are also hundreds of short local hiking circuits for less dedicated hikers and family outings.
As far as mountains are concerned, most of the massif Central is upland country, at an altitude of between 800 and 1300 metres. However there are two smaller areas of high mountain, "proper mountains" with peaks at over 1800 metres, and some rugged mountain terrain. These are the volcanic areas of the Massif du Sancy, south of Clermont Ferrand, and the Monts du Cantal (photo top of page). Both have winter sports resorts and cable cars to their highest peaks. In addition, there are several other high peaks in the Massif Central, notably the Mont Mezenc and the Gerbier du Jonc, on the borders of the Haute Loire and the Ardèche, and the Mont Aigouäl, in the Lozère.

While it is the Massif du Sancy and the Department of Puy de Dome in general that attract the most tourists, two other departments, the Haute Loire in Auvergne and the Aveyron in the Midi Pyrenees region have just as much if not more to offer. In summer, they both enjoy a warm and fairly dry climate.
The southern fringe of the Massif Central contains large areas of limestone uplands known as the Causses. Arid and with thin topsoil, the causses are very sparsely inhabited, and the traditional activity here is sheep farming, notably for the production of ewe's milk to make the famous Roquefort cheese
Most of the rivers of southern France rise in the Massif Central; these include the Lot, the Tarn, the Dordogne, the Allier, the Loire and the Ardèche, whose valleys are popular for water sports, including river swimming, kayaking and fishing. The valleys of the Lot, the Tarn and the Allier are particularly attractive, and the Tarn Gorge, near Millau, is one of the most impressive canyons in Europe. Just south of Millau, it is spanned by the impressive Millau viaduct on the A75 motorway.
The whole of the Massif Central is an area popular with ornithologists, and the Tarn gorge and the Allier gorge areas are particularly rich in bird-life; the former is now home to hundreds of griffon vultures, successfully reintroduced in the 1990s; the latter boasts Europe's largest population of short-toed eagles; both are home to many other species of birds of prey including buzzards, kites, falcons and harriers. 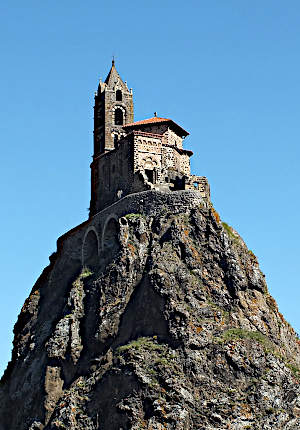 Unique 11th century chapel on the pinnacle of l'Aiguilhe, in Le Puy
Largely off the beaten track until the advent of motorways, the Massif Central is an area  with plenty of historic small towns and villages, a wealth of impressive medieval castles, and some beautiful medieval churches. And this is in addition to the spectacular scenery and the broad range of opportunities for outdoor activities.
Among small cities worth visiting for their historic heritage are Le Puy en Velay, Cahors, Rodez and Millau.
Some of the regions's most spectacular castles are those at Vals  Murol and Polignac in the Auvergne, and Valentré and Séverac in the Midi-Pyrenees part of the Massif Central.
The Haute Loire department in Auvergne has a rich collection of medieval churches, many of them decorated with historic frescoes.  The Aveyron department is one of the two richest departments in France for the number of pretty villages.
But these are just the icing on the cake.
For more details, check out the regional guides for the Auvergne, Limousin and Midi Pyrénées regions, and also pages on the best small towns in France and beautiful villages in France.


► You may also like :  Guide to the French Pyrenees

Photo top of page: les Monts du Cantal - at the heart of the Massif Central uplands 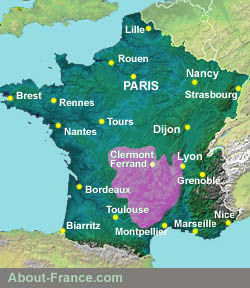 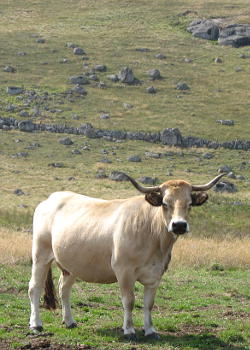 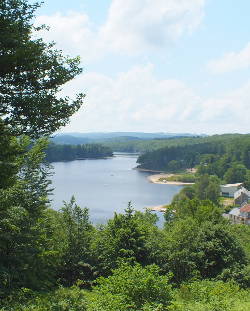 Lakes and forests in the high Limousin area 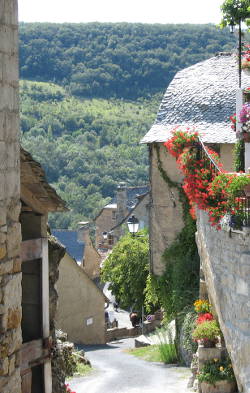 Village in the southwest of the Massif Central - Aveyron


About-France.com works as an affiliate for certain travel service providers, and may receive a small commission on sales generated via affiliate links on the website. .