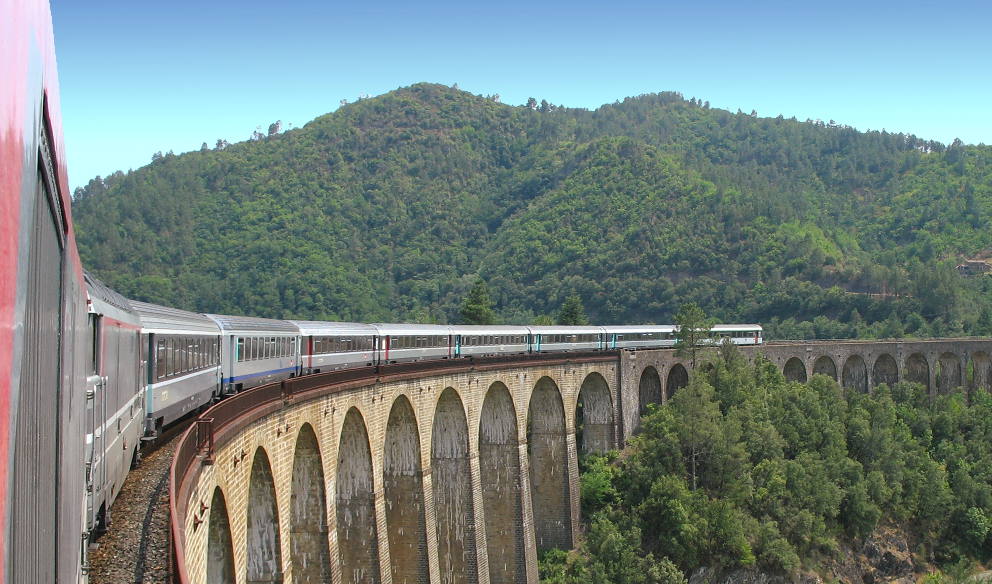 Travel by train in France - tips and tickets

► For individual tickets  About-France.com works with  Trainline.com to bring you point-to-point tickets in France and Europe for no extra fee, no surcharge, and full options including travel card holder discounts. Available worldwide for print-your-own tickets or e-tickets or QR code.

► For European rail passes, visit our partners Eurail (for worldwide sales) or Interrail (for passes purchased in the UK). 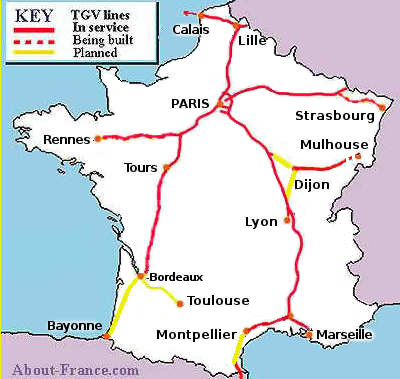 French railways : the easiest, often the fastest and usually the most convenient way to get round France

Taking the train - rather than flying - is the best option for anyone planning to visit France without a car.  With 2800 km of dedicated high-speed lines, plus thousands more kilometres of main line and branch line, the French rail network links all main towns, and also extends deep into rural France. French trains are on the whole comfortable, punctual and relatively cheap.

1. High speed through France: Eurostar and the TGV network

By Eurostar from St Pancras, the fastest journey time from London to Paris is now just 2 hours and 15 minutes, city centre to city centre. And for anyone boarding the Eurostar at Ebbsfleet, the new station in south east London, the trip is even faster, from just 2 hours and 5 minutes.
In terms of speed and convenience,  Eurostar has shown that on journeys of 200 miles or so, the train is far more convenient than the plane.
The opening of a new high-speed rail line into London was a novelty for Londoners in 2007; but Parisians were not particularly impressed; after all, France has been steadily expanding its high-speed rail network for over a quarter of a century! The first French TGV lines were on the drawing board in the early 1970s, and the first long-distance route, from Paris to Lyons, opened way back in 1981!
But if a lot of people already know that the best way to go from London to Paris for a day's shopping or a weekend break, is to take Eurostar, far less people realise that the extent of the Eurostar connections at Lille to other cities in France French high-speed rail network means that  taking the train is rapid option for reaching a large number of destinations in provincial France.
Connecting to provincial cities. It's easier to change at Lille than Paris.
The map above shows the extent of France's high-speed rail network in 2015. At present, the network consists of some 2800 km (over 1600 miles) of dedicated high-speed track, comprising four routes radiating out from Paris, and half of the "Rhine-Rhone route".  However, an "interconnection" route round the south and west of Paris allows high-speed connections between the routes, notably allowing north-south TGVs to avoid the centre of Paris.
Note that TGV services operate to all the cities indicated on the map, and to many others too, since these high speed trains can also run - at reduced speed - on the traditional rail network.
This makes the TGV station at Lille Europe a very handy hub for passengers coming  from the UK or Belgium and Holland.
The alternative to changing at Lille is to take Eurostar to Paris, and then travel beyond Paris from the appropriate mainline terminus.; but this will normally involve changing terminus at Paris: see below.

Airport connections:
Thanks to intelligent forward thinking, planners of the French TGV network had the sense to connect it directly, when possible, to major airports. Thus, there is a major TGV station right underneath Terminal 2 at Paris's Charles de Gaulle airport; and there is a TGV station in the middle of the Lyon Saint Exupery airport.

Like many capital cities, Paris suffers from having no central railway hub, but a number of mainline termini. Here are the main destinations served from each of the principal termini: TGV services depart from the Gare du Nord, Gare de l'Est, gare de Lyon and Gare Montparnasse.
► Book tickets safely online from any of these stations witht Trainline.com

To compete with low-cost airlines, some TGVs offer major reductions if tickets (or e-tickets) are purchased online.  OUIGO services (originally called ID-TGV, and pronounced we go) – sometimes complete trains, at other times a quota of seats in a standard service – now operate from Paris to about 20 destinations
For example, you can buy a first class ticket from Paris to Lyon  for 29 Euros on certain off-peak trains, compared to 56 to 66 €uros, or 114 €uros for a normal first class ticket on certain trains . However, don't pay much attention to the sites that say "Paris-Marseille" or "Paris-Montpellier" for just 19 €: these very low prices are indeed available, but only on about one train a month, if that!
OUIGO train tickets can be bought at OUIGO prices and no booking fee, and all the options, on the Trainline.com website. Ouigo services and rates will appear among the search results.


On main routes not served by TGVs, such as Paris-Clermont-Ferrand or Paris - Limoges - Brive, very comfortable express trains run at speeds that can reach 200 km/hr on some stretches. These long-distance express trains, previously known as "corails" are now known as "Intercités".

French railways have a reputation for punctuality, though delays seem slightly more common these days than in the past. Most trains however run on time, and delays of over ten minutes are unusual. This is doubtless one of the reasons why the French are regular rail travellers. If a mainline train (TGV or Intercités) is over 30 minutes late at arrival, on a journey of over 200 km., demand a late-arrival form when you reach your destination ; in some stations, staff will hand them out automatically. Fill this in and send it off with your ticket in the business-reply envelope provided, and you should receive a voucher worth 30% of the cost of your ticket.
It's not just on main lines, however, that rail travel in France can be a great way to travel. More and more branch lines and feeder services are now operated with state-of-the art and very comfortable new railcars that resemble miniature TGV's. With massive picture windows along the sides, the experience of travelling along some rural rail routes is  rather like that of riding a scenic railway; and regional councils, that are now in charge of running local rail services, seem to  be competing with each other, particularly in tourist areas, to boost their image by investing in these very impressive new railcars. Even better, many French regions have invested quite heavily in recent years in upgrading regional branch lines with new track as well as new rolling stock. And in some departments, local services all cost just one Euro a ride ! And as with all rail trips, you'll find them at the same price if you book online  on the Trainline.com website.

France also offers plenty of scope for rail tourism on its various scenic railways.
There are or course other less comfortable rides to be had on French railways. Some suburban routes and local services on main lines are still operated using old and sometimes noisy and uncomfortable stock - but even on such routes, this is by no means always the case.

The cost of rail travel in France:

Finally, there's the question of tickets. As a nationalised system, the French railways used to run a clear and coherent ticketing system, and generally speaking rail travel remains relatively cheap - about 15p a kilometer (1.7 Euro per 10 km in 2017) for a standard second class fare. This is more than the cost of rail travel in Spain or Italy, but far cheaper than standard tickets in the UK. Lots of discounts can be obtained, generally varying between 25% and 50%, and longer journeys tend to cost proportionally less than shorter ones.
In recent years, particularly on busy routes and TGVs, the cost of tickets has begun to vary wildly in function of the date and time of the journey; on many intercity routes, special low-cost tickets , known as "Prems", are available to the early birds who book well in advance. These are even available on overnight sleepers - but not at busy times, of course.

All French train tickets can also be ordered online - and even printed out on your own computer  as an e-ticket, like a plane ticket.  Check out Trainline.com

Most mainline trains and all TGVs can be booked in advance. On main routes, this is advisable, and often essential. Use the website below 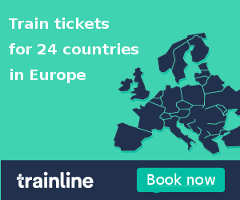 Or take a travel pass with 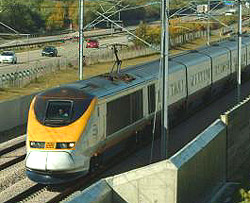