Céret - between Pyrenees and Mediterranean 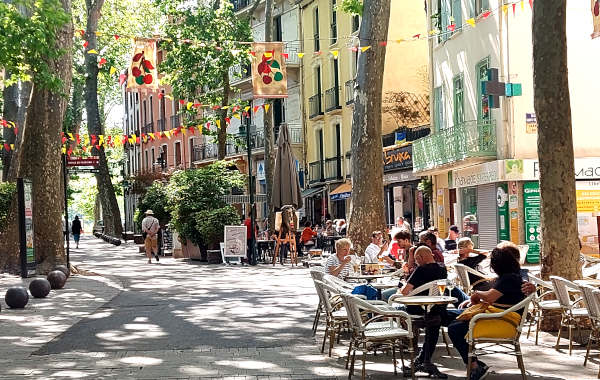 The main street in Céret
Even if it did not boast one of the finest modern art galleries in France, reopened in 2022 after extensive rebuilding, Céret would be one of those small  towns that make such a delight of exploring the hidden gems of provincial France.
Lying twenty-five miles inland from the Mediterranean coast, at the foot of the iconic mountain of French Catalonia le Canigou, Ceret is a small town that encapsulates the essence of southern France. With its narrow streets, its tall plane trees, its Mediterrean tiled roofs and its ochre-coloured facades, its fountains and its streams, it's a small town that can be explored in half an hour or enjoyed for much longer while sipping a coffee or a cool drink on one of the town's shady squares or pedestrian streets. It would be worth a visit for that alone, even if there were nothing else of interest. But there is plenty.


With a population of under 8,000, Céret is very much a small town, and one which is a pleasure to visit The whole town centre is free of traffic, and cafés spread out onto the roads in the shade of centuries-old plane trees typical of southern France.
Thanks to its position on the slopes of the lower Pyrenees, many of the narrow streets are cooled by running mountain streams that are channeled down runnels and emerge from fountains in the old town. The most famous of these is the 14th - 16th century Fountain of the Nine Jets, perhaps France's equivalent to the Fountain of the Lions in the Alhambra; in a different vein is the 21st century cubist fountain on the Place Picasso.
A short walk away from the town centre, the Devil's Bridge is one of the larger medieval hump-backed bridges in France. According to the tradition, the bridge was built in the space of a single night by the Devil himself.... but then some people will believe anything! Today the bridge is closed to traffic, but pedestrians and cyclists can walk across it.
Every Saturday, the streets and squares of Ceret are thronged for the weekly market, and in May the town, celebrates its annual cherry festival.


The legacy of Picasso 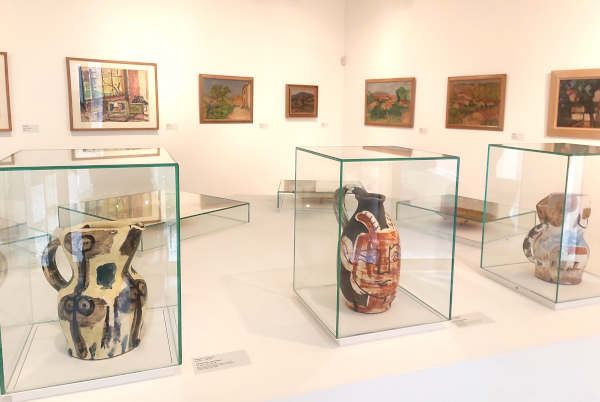 Picasso donated 57 items to the museum, including ceramics and paintings.
In the mid twentieth century, local artists Pierre Brune and Frank Burty Haviland were at the heart of a community of artists who lived or painted in Céret and the surrounding countryside. Among them was Picasso, who had first come to Céret in 1911, and for whom Céret was just about the closest he could get to his native Spain, from where he was exiled throughout the Franco era.
Brune and Picasso decided to create a gallery for the works of artists who lived or stayed in the area, and asked their friends to contribute; and so it was that in 1950 the Ceret Museum of Modern Art opened with a substantial collection of works by the greatest artists of the day, including Picasso, Brune and Matisse.
Since then both the museum and its collection have grown, and the new building, opened in 2022, houes works by most of the great French artists of the early to mid twentieth century, including Picasso, Chagall, Dérain, Matisse, Dufy and many more. The museum also hosts temporary exhibitions of works by contemporary artists and sculptures - making it one of the finest modern art galleries in France.

In the area of  Céret

Photo top of page : The fountain of the nine jets 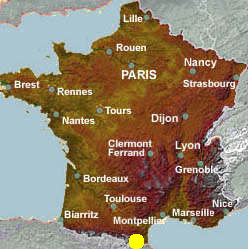 Check out hotels in Céret 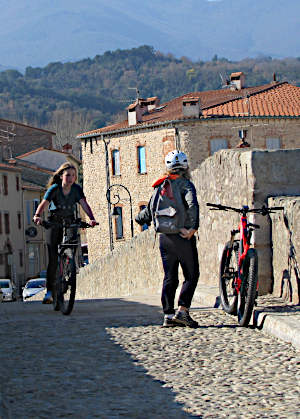 Cyclists on the Devil's Bridge

About-France.com  is  a fully independent website  affiliated to certain online booking platforms, and  may receive a small commission only on bookings made through affiliate sites . This has no effect at all on the price paid by the visitor.

Map enhanced from an open-source original by Openstreetmap. org