The 2015 Tour de France ended in Paris on Sunday 26th July.
Two days before the race to the finishing line up the Champs Elysï¿½es, the tension was high. In France eyes were on Romain Bardet, who moved up into the top 10 places after winning the mountain stage on July 23rd; in Britain, supporters were rooting for another British win with Chris Froome, who has been wearing the coveted "yellow jersey" for most of the race so far, and is leading the pack; but on Friday, second-placed Nairo Quintana, from Columbia, narrowed the gap with Froome to just 2 mins 38 secs. Spanish enthusiasts were hoping that Froome could be caught and overtaken by Valverde or Contador, respectively 3rd and 5th at the end of stage 19; while Dutch riders Gesink and Mollema were also battling it out among the top ten places.
Two days before the end of the race, Froome's  lead over second-placed Quintana was down to just over two and a half minutes, but a total of over 17 minutes now separated the top ten riders. Barring any accident, Froome and Quintana looked assured of a place on the podium at the end of the race; but there were several potential contenders for the third place.
The 2015 Tour started on July 6th, and this year it has followed an unusual route. Apart from the final Paris leg, riders will not see anything of France between Brittany and the Pyrenees, or between Amiens and the Alps.  Excluding stages 13 to 16, riders will have spent almost all their time less than fifty miles from the northern French coast, or from the Spanish or Italian borders.
After starting on 4th July in Utrecht, Holland, and after a brief incursion inland in Belgium, the northern stages of the race were limited to the regions bordering on France's northern coastline..
From the stage finish on 7th July in Cambrai, near the Belgian border, riders moved generally southwest as far as Vannes in Brittany, reached on 12th July; and that is the end of events as far as the northern half of France is concerned – barring of course the final sprint to the finish on the Champs Elysï¿½es in Paris.
From 14th to 25th July 2015, the Tour de France has been a "Tour du Midi", or tour of the south of France. Three days in and around the Pyrenees are followed by four days crossing over the southern fringe of the Massif Central, via Rodez  Mende and Valence, to the Alps. Then four days in the Alps, after which riders fly back to Paris for the final day's sprint. 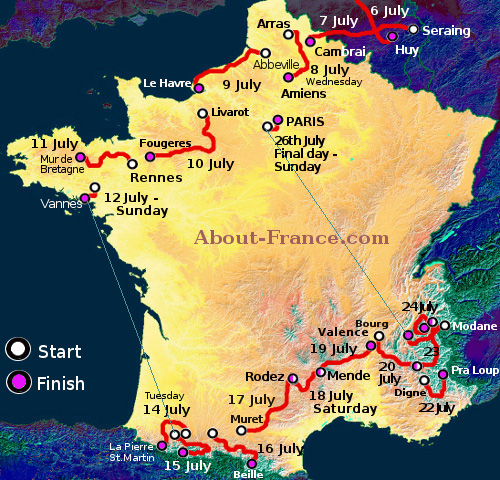 Click stage areas for regional tourism information
Copyright : If you copy this map on your blog or non-commercial website, you must attribute it to About-France.com
The 2015 Tour de France is a north and south event which will give plenty of opportunities to the hill-climbers. Seven of the Tour's 21 stages are mountain stages, taking in some of the highest passes in the Pyrenees and the Alps, including the Col du Galibier, at 2642 metres.
The first mountain climb is at the end of stage 10, which is on July 14th, France's national day, with a climb from 134 metres at Maulï¿½on, to the finish at 1610 metres at La Plaine Saint Martin.
Stage 11, on July 15th, is a Pyrenean classic, with climbs to the Col d'Aspin, 1490 metres, then to the Col du Tourmalet at 2115 metres, before a finish at the ski resort of Cauterets. The third and last Pyrenean stage, on July 16th,  is a four climb day, finishing with a 1260 metre climb to the the finish at Plateau de Beille, at an altitude of  1780 metres.
From 17th to 20th July, riders make their way across to the Alps; there are plenty of hills in this part of France. This part of the route takes in  the spectacular Tarn gorge, including passing underneath the  Millau viaduct.
On 22nd July, for the first proper Alpine stage, riders take in four passes of over 1000 metres, the highest being the Col d'Allos at 2205 metres before a descent then another ascent to the finish at 1620 metres at Pra Loup. 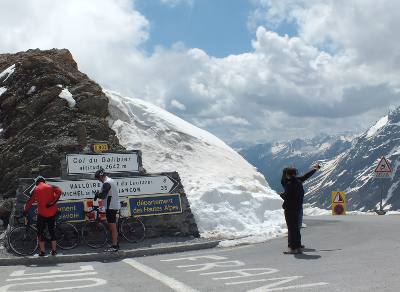 On day 18, July 23rd, riders will need all the stamina they have for the climb from Sï¿½chillienne at 365 metres to the pass at Col du Glandon, at 1924 metres - a virtually continual climb of  1559 metres, or about 5000 ft.
Next day is another four summit day, peaking at the Col de la Croix de Fer, 2067 metres, and with a final climb to the finish at 1705 metres at La Toussuire.
But the icing on the cake comes on the final Alpine day, stage 20 on Saturday July 25th. The gruelling climb that begins at Saint Michel de Maurienne, at 732 metres, takes riders to the high pass at Col de la Croix de Fer, 2067 metres above sea level. That's followed by a long downhill down to Bourg d'Oisans before another 1100 metre climb back up the hairpin bends on the road to the finish at Alpe d'Huez, at an altitude of 1850 metres – a total climb for the single day of almost 3200 metres, over 10,500 ft.
After that, the following day's great sprint to the finish up the Champs Elysï¿½es in Paris should seem like a doddle.


A brief introduction to the regions of France
Website and all pages ï¿½  Copyright About-France.com 2003 - 2015

Descent from the Col du Galibier


Got a story?  Send an email to: info "at" about-france.com