The bridge in the sky

► You are here : France  › Driving  ›   Millau viaduct
About-France.com - the connoisseur's guide to France
THE MILLAU VIADUCT over the TARN VALLEY  ....... 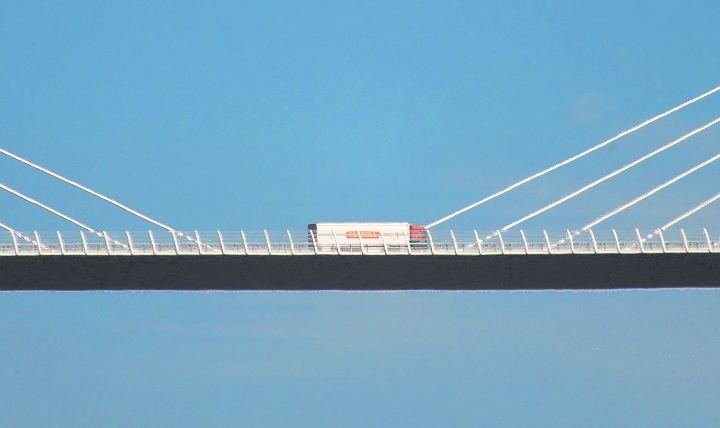 On the way to Spain and Languedoc, via France's A75 motorway.

Click for more  information and tips on driving in France.

Opened in 2004, Norman Foster's magnificent motorway bridge over the Tarn valley at Millau has established itself as one of the must-see modern monuments in France. It is the world's highest multi-span bridge (the deck is 900 ft above the valley floor at its deepest) and the longest suspended bridge in the world, and an engineering wonder of the world, worth the visit. 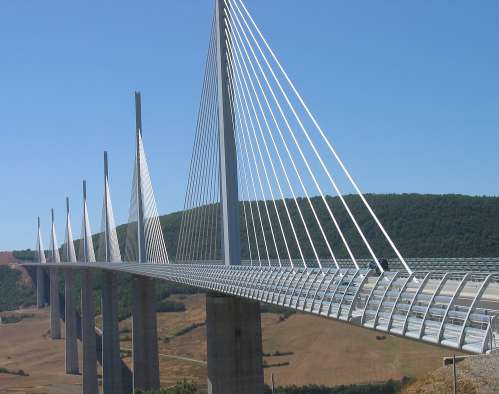 The viaduct carries the A75 Clermont-Ferrand to Béziers motorway across the Tarn valley.  The motorway is free, but there is a toll charge for crossing the viaduct.
The toll booths are located a couple of kilometres north of the viaduct; just before the northern end of the viaduct, there is a large motorway rest area, offering spectacular views of the viaduct, as well as a visitor centre with information on the bridge and its building. For the best photo opportunities, arrive at the bridge shortly after sunrise in the Autumn, when the bridge frequently floats above the overnight mists that have formed in the valley below.
Information on the Millau bridge, including audio-visual displays, can also be had in the tourist information section of the "Aire de l'Aveyron" service area, some 40 kilometres north of the viaduct, at Séverac le Château.
Those interested in bridges, and heading for the Millau Viaduct south down the A75 motorway from Clermont Ferrand, will want to stop off on the way to view  another magnificent viaduct, Gustave Eiffel's Viaduc de Garabit. This great 19th century viaduct is best seen from the motorway rest area, the Aire de Service Viaduc Garabit Eiffel, where there is a small interpretive centre.  See photo on the Auvergne page of this website. 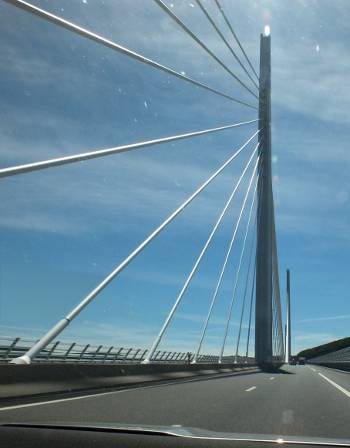 In detail: apart from the more recent Baluarte bridge in Mexico, which spans a narrow gorge, the Millau viaduct has the highest road bridge deck in the world, at a maximum height of 270 m (890 ft) over the Tarn River. This is almost twice as high as the second-highest road bridge in Europe, the Europabrücke on Austria's Brenner pass motorway. There are only two bridges in the world with a higher deck, the Baluarte Bridge in Mexico, which is much shorter (a single central span of 520 metres), and the Royal Gorge Bridge in Colorado, United States, with a deck at 321 m (1,050 ft); but the latter is not open to traffic under normal circumstances.
The roadway over the Millau bridge is 2.46 kilometres long, and weighs about 36,000 tonnes; it is the longest cable-stayed bridge deck in the world.  The six central spans are eack 342 metres in length. The bridge took three years to build, and was opened in December 2004.

Millau, in the northeast of the Midi-Pyrenees area of the Occitanie region, is a small Mediterranean-style town on the banks of the river Tarn, in the Aveyron department,. Once a notable bottleneck on the old N9 road, Millau is now just a quiet provincial  town, albeit one that is attracting a growing number of visitors on account of the viaduct. But the viaduct is not the only thing worth seeing in Millau. Millau is a convenient centre for exploring the famous Gorges du Tarn - the deepest canyon in France, the Gorges de la Dourbie, the Causses - barren limestone plateaux - and the famous blue-cheese cellars at Roquefort.

Some places to stay in Millau: The Ibis midscale hotel; or the Mercure four-star9 hotel, both near the old town centre. There is a The Originals (formerly Petit-Dej hotel and before that Balladins) on the Larzac service area of the A75 motorway, just south of the viaduct.  Or check out some gites in the Aveyron area

For people driving to the Languedoc area of the south of France or to the Spanish coast, taking the A75 motorway across the Massif Central mountains can often - but not always - be a sensible choice. The A71 / A75 motorway route via Orleans and Clermont Ferrand is the shortest and cheapest way to the Spanish border at Le Pertuis. Furthermore, it is cheaper on tolls, as the section between Clermont Ferrand and Beziers is free, except for the toll at the bridge, which, for cars, costs 7.50 Euros in winter, and 9.40 € in summer (2015 rates). 50% more for caravans and camping cars.

WARNING !! The A75 motorway is not for all traffic - and not a motorway for all seasons.... 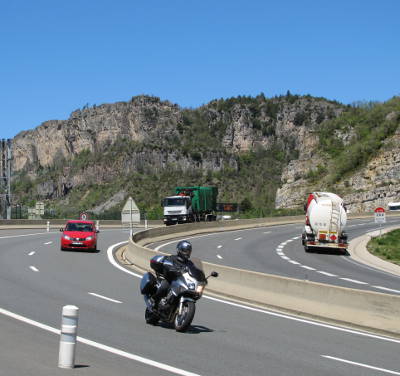 The Pas de l'Escalette - one of the gradients on the A75. Speed limit 70 km/h downhill for cars,  50km/h  for  caravans and vehicles over 3.5 tonnes
The motorway across the top of France's Massif Central remains at an altitude of up to 1100 metres for over 60 km between the the Col de la Fageole at 1107 metres, near Saint Flour, and the highest point, the Col des Issartets at 1121 metres, near Marvejols. South of that, there are two more summits at over 800 metres. So be warned; this is not a route for cars towing heavy caravans, as there are several long and (for a motorway) steep climbs and descents. There are also some speed restrictions and permanent speed cameras. The A75 is a motorway that can get quickly blocked in winter, in the event of sudden heavy snowfalls which are not uncommon on the high ground. Information panels before the motorway rises to high ground indicate which routes are open.....  but in some cases it can be a long way to turn round and find another route... specially when approaching from the north.
Be prepared for the Pas de l'Escalette, where the A75 drops off the Massif Central, down to the Mediterranean plain, a fall of over 600 metres (almost 2000 ft) in under 10 km.... This descent is limited to 70 km/h in parts for cars, and 50 km/h for over 3.5 tonnes and caravans.
Another warning: Saturdays between mid July and mid August. Do not need to fill up with petrol on the A75 on these very busy holiday weekends; the service stations on this route cannot cope with the very heavy extra traffic on these days, and petrol queues can be backed up well onto the motorway. If you need to fill up, go off the motorway. 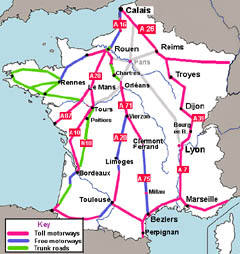 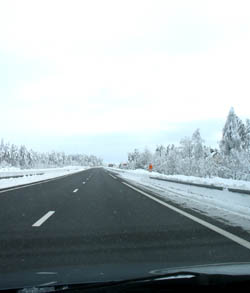 The A75 motorway in mid winter...  after the snow-ploughs have been busy.