A tour of France's mountains

► You are here:   France  ›  Tourism  ›  Cycling  ›  The Tour de France
About-France.com - the connoisseur's guide to France

A diagonal trip across France, from the southwest corner almost to the northeast, taking in the Pyrenees, Gascony, the Massif Central, the Alps, the Jura and the Vosges. 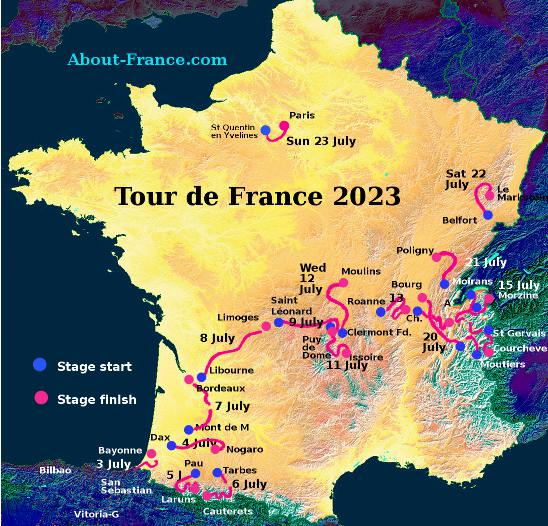 Detailed map - click for regional tourism info
Copyright : If you copy this map on your blog or non-commercial website, you must credit it to About-France.com
A GUIDE TO THE ROUTE


This year's Tour de France starts off in the Basque country of Northern Spain, before entering France on Monday July 3rd for a stage finish in the Basque city of Bayonne.
It's after day 4 spent crossing the low lying land between Dax and Nogaro, a small town in the Armagnac area of Gascony, that the difficulties begin. Day 5 is the first of two classic Pyrenean stages, including a number of the traditional Tour de France Pyrenean passes before riders emerge from the mountains for a finish on day 6 at Tarbes. Day 7 offers some easier going, with a fairly flat day's cycling across the Landes and the Garonne valley for a finish in the UNESCO world heritage city of Bordeaux..
The next day, riders leave the South-West, cycling northeast through the Dordogne and the hills of the Périgord-Limousin regional park, to the porcelain city of Limoges.  Then on Day 9, it's another mountain stage, al beit less demanding than the Pyrenees, as riders cross the northern uplands of the Massif Central, for a final climb to the top of the Puy de Dôme, the great (dormant) volcano that towers above the city of Clermont Ferrand.
After a rest day in Clermont, the route takes in two more stages in the Auvergne area, with two finishes on the river Allier, firstly in the small town of Issoire, and secondly - on Wednesday 12th July - in the town of Moulins, capital of the Allier department.
From Thursday 13th July until Thursday 20th, the 2023 Tour de France takes riders on a discovery of the Rhone-Alpes area, starting with a hilly day crossing from the Loire valley to the Rhone valley, over the mountains and the vineyards of the Beaujolais. The following day starts off flat, with some 40 kilometres across the Bresse before riders reach the Alpine foothills of the Bugey, and then the Alps proper.
On Bastille day Friday 14th July and the weekend that follows, the route takes in some of the classic Alpine passes, with frinishes at Grand Colombier, Morzine and Saint Gervais, followed by a welcome rest day on Monday 17th July in Saint Gervais. Tuesday 18th July is the only time trials day of this edition of the Tour, with riders undertaking a 22 km circuit around Passy. The next day, Wednesday 19th, is the last fully Alpine stage, with a finish at the ski resort of Courchevel. The following day riders head out of the Alps and north as far as the town of Bourg en Bresse, capital of the Ain department.
The last three days of the 2023 Tour are geographically spaced out, with a day in the Jura mountains - the home of the popular Comté cheese - followed by a day on  the western slopes of the Vosges mountains and a summit finish at Le Markolstein. Arter that, all that's left is the final day on Sunday 23rd July with its traditional finish on the Champs Elysées in Paris.
(And as a spoiler.... next year, 2024, the Tour will not finish on the Champs Elysées in Paris, but in Nice.  The Tour is scheduled to end just four days before the start of the 2024 Paris Olympics, and a Paris finish would have been a logistical nightmare). 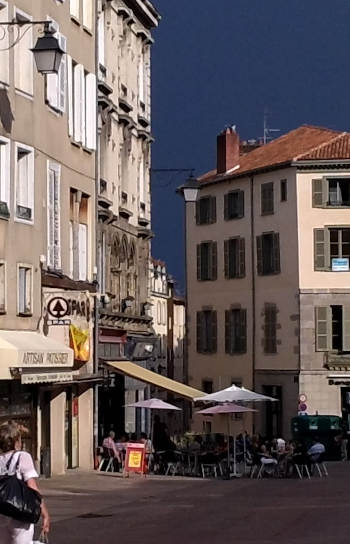 A stormy summer's evening in Limoges 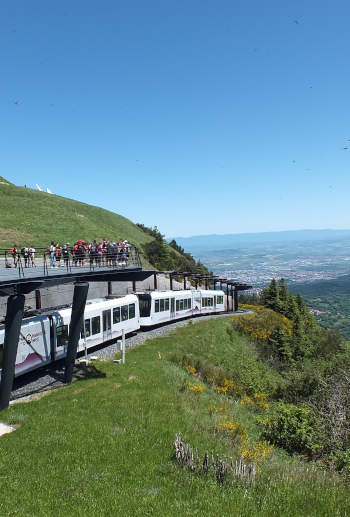 The summit of the Puy de Dome (1485 metres) with the city of Clermont Ferrand below. (Days 9 - 11 and rest day location)

Cycling in the Alps 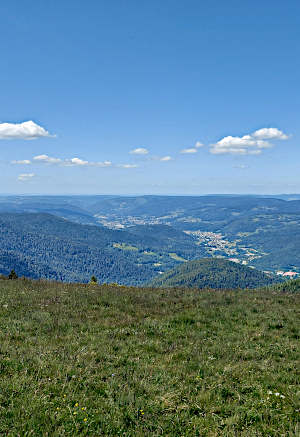