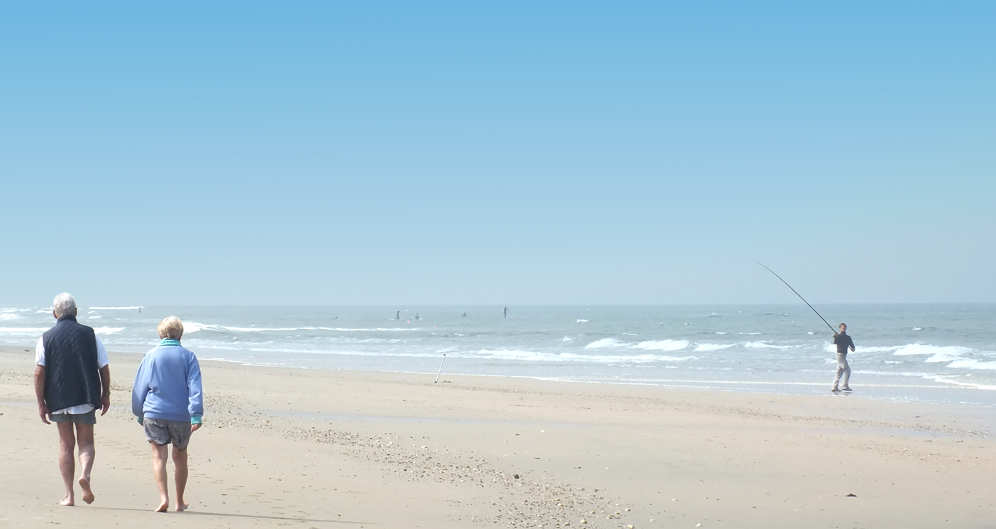 ► You are here:   France  ›  Regions  ›  Old Aquitaine
About-France.com - the connoisseur's guide to France

Old Aquitaine, from the Dordogne to the Basque country 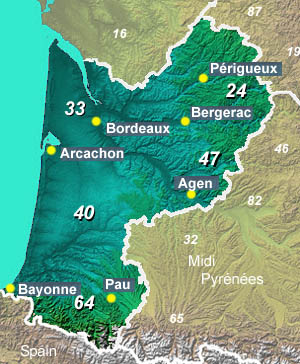 Aquitaine, capital city Bordeaux,  was one of the great historic provinces of France.
This page covers the area that until 2016 was the Aquitaine region of France, now merged into a larger region known as Nouvelle Aquitaine.
Old Aquitaine is  one of the largest and most varied regions of France, stretching from the foothills of the Massif Central in the north, to the Spanish border in the south, a distance of over 300 km. In the Middle Ages, Aquitaine was allied with the Plantagenet kings of England, and the region has many historic connections with the British Isles, notably through the wine trade.
On account of its size, Aquitaine is a very varied region; the northwest of the area, comprising the departments of the Dordogne (24) and the Lot et Garonne (47) is made up of gentle hill country, with large areas of vineyards in the lower lying areas, and woodland and mixed farming in the hillier north east. The Dordogne area (click for more details) is famous for its rurality, its gentle valleys and villages, which seem to outsiders to be lost in time, and have become very popular with second-home buyers from the UK and the Netherlands   human habitation in Europe, and many prehistoric sites can be found round the area of Lascaux (remarkable caves, a UNESCO world heritage site) and Les Eyzies. Within France, the Dordogne department is more famous for its gastronomic specialities, truffles, foie-gras, walnuts and other mouth-watering delicacies, and is often rerferred to as "le Périgord", the area around the departmental capital of Périgueux.
The middle band of the region, following the line of the Gironde estuary, is low-lying land, and one of the most famous wine-producing areas in France. Bordeaux, regional capital and capital of the Gironde (33) department, is amagnificent city lying at the lowest bridging point on the Garonne river. it is one of France's great seaports, and its historic wealth is reflected in the many fine buildings of the old city, such as the unique eighteenth-century theatre. North of Bordeaux, to the west of the Gironde estuary, lies the area of Médoc, the most prestigious of the region's wine-producing areas; other famous vineyard areas can be found all round Bordeaux, and notably along the valley of the Garonne and its tributaries. 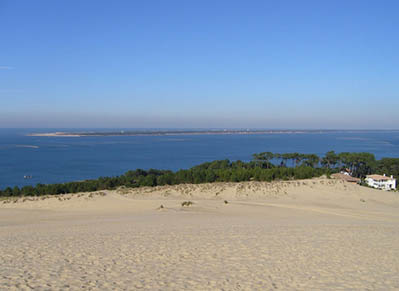 Sand dunes above the bay of Arcachon
The area around the small historic city of St. Emilion is another famous vineyard area. Further inland, the area between Marmande and Agen supports a busy fruit and vegetable industry.
Old Aquitaine boasts over 200 km of sandy shoreline, known as the Côte d'Argent, or Silver coast. With major resorts few and far between, except  in at the southern end within fifty kilometres of the Spanish border, this is a coastline with ample room for everyone.  The southern end of the coastline, south of Hosségor and Capbreton, is more  built up, with the resorts of Biarritz, Bayonne and Saint Jean de Luz among others.
West of Bordeaux,  the resort of Arcachon is very popular, on account of its sheltered anchorage, favoured by yachtsmen, and the proximity of the Dune du Pilat, the highest sand dune in Europe.

The southern part of Aquitaine is made up of two distinct areas, the departments of les Landes (40) and the Pyrénées Atlantiques (64). Les Landes is the most heavily forested area of Europe; a low lying area with sandy soil, almost the whole department is covered with pine forests interspersed with small areas of heath and farmland. The forests are popular with nature lovers, ramblers and hunters, and support a major timber industry. Outside the few towns and seaside resorts, the department of les Landes, which until the nineteenth century was renowned as an inhospitable wasteland, is one of the least densely populated areas of France. It is also a department where almost a quarter of all dwellings are second homes.    Les Landes is part of the historic area of Gascony.
The department of Pyrénées Atlantiques (64) is essentially composed of the former province of Bearn and the Basque country. It is a very attractive department, offering everything from  Atlantic surf on the beaches around St Jean de Luz and Biarritz, to good skiing on the slopes high up in the Pyrenees. The foothills of the Pyrenees are a delightful area, benefiting from a very mild climate, and sufficient rainfall to remain green and luscious through many months of the year. Pau, the departmental capital, is an elegant city that was very popular with the British in the nineteenth century as a thermal resort, and even boasted at one time an English hunt, complete with hounds and redcoats.
Aquitaine is a region that is popular for cycle tourism:  two long distance cycle routes, the Atlantic cycleway and the Atlantic-Mediterranean cycle route cross the region. In Aquitaine, both are largely on dedicated surfaced cycle routes, and are flat, as they largely follow the coast or rivers / canals.

North east of the Garonne:


South west of the Garonne: 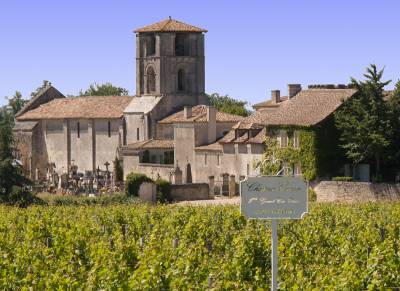 ► Stay on a Bordeaux wine estate :

a select choice of some active wine estates in Aquitaine offering cellar visits, wine tasting and hotel or b&b accommodation. 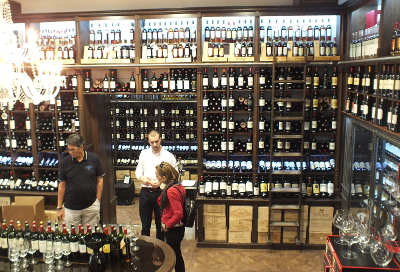 This area produces some of the world's finest wines 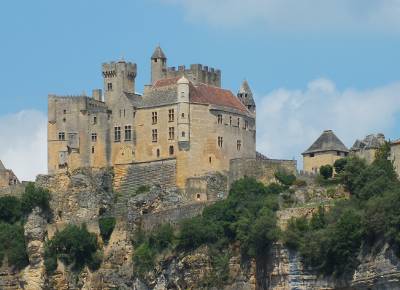 The Château at Beynac in the Dordogne 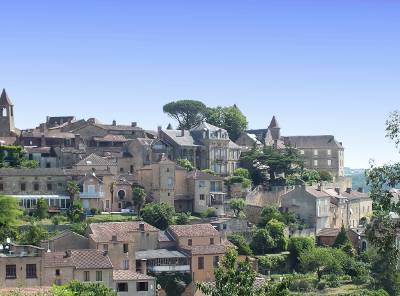 Hillside village of Belvès, in the Dordogne 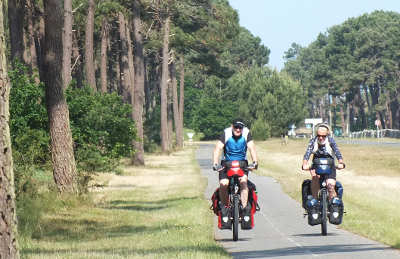 Aquitaine is well equipped in dedicated cycleways, notably on the flat land near the coast. 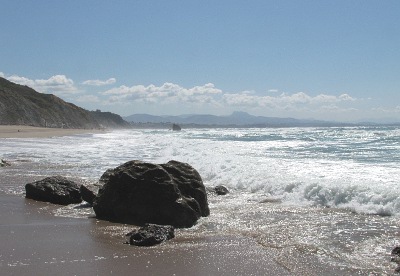 About-France.com    -  Site search  -   Maps of France  -  Contact
Lying in the southwestern corner of France, Old Aquitaine, the former region of Aquitaine, is an area famed for its wine, its beaches and its countryside.
Southwest of Bordeaux and the Gironde, the area is mostly low lying. In the northeast, which includes the Dordogne, the land is hillier country, famed for its gourmet cuisine,its picturesque villages, and its historic sites. 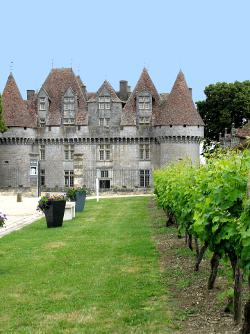 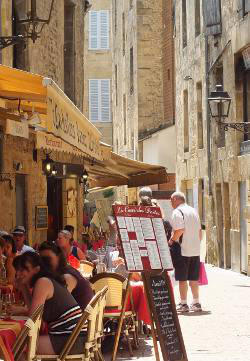 Old Sarlat, in the Dordogne

By train to Bordeaux :  TGV from Paris Gare Montparnasse, or from Lille; train from Toulouse or Marseille.
By car : motorway  from the Channel ports via Rouen and Tours, or from Paris.
See Routes to southwest France
By air : to airports at Bordeaux, Bergerac, Pau and Biarritz - or (peripheral) Toulouse. See Flights to France 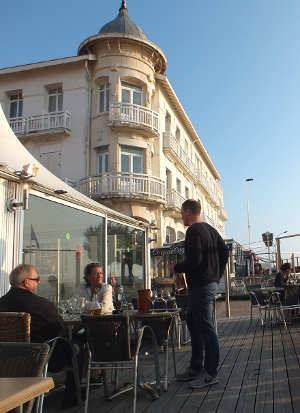 There are plenty of attractive seaside cafés


An independent user-supported website, About-France.com is an affiliate partner of carefully selected relevant third-party websites, and may receive a small commission on some transactions made on these partner sites. 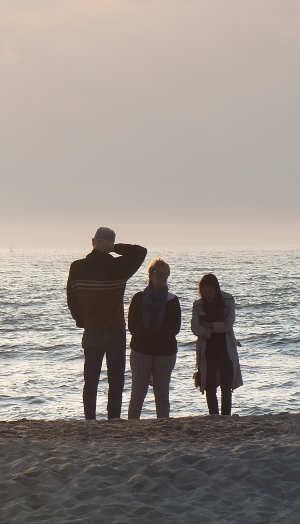 And miles of sandy beaches