Cycling is a great tradition in France - specially when it comes to "le Tour". Each year, hundreds of thousands of locals and holidaymakers turn up in spots all round France to watch not just the cyclists, but also the great "caravan" of floats, cars, media and officals go by...


2012 - Final result
The 2012 Tour is now over, and for the first time ever the race was won by a Briton. Favourite Bradley Wiggins  won the 99th Tour de France, ahead of fellow Briton and team mate Chris Froom. The final day of the race was a great day for British cyclists, with Mark Cavendish, another UK contestant, winning the day's leg.      French cyclists were not left out of the results of what has become a completely international event. Two up-and-coming French riders came in in the top ten, and French rider Thomas Voeckler won the mountain stages title. 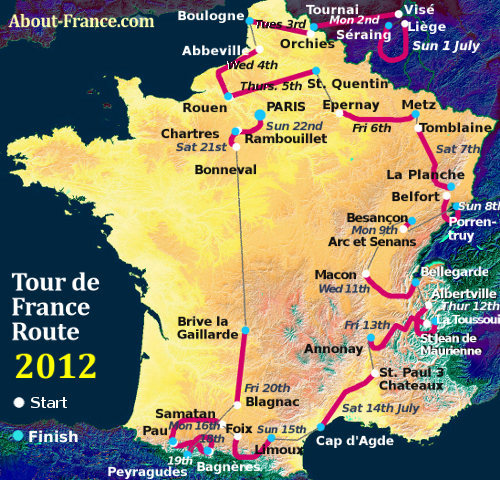 Tour de France route map by About-France.com . Copying permitted only by permission.
The route of the 2012 Tour de France
Starting in Belgium, the Tour is in France from stage 3 onwards. From 3rd - 5th July, riders will be in northern France; from the 6th - 9th July they will be in rather hillier eastern France, with, in particular, a finish at the summit of La Planche in the Vosges mountains on Sat 7th. The first time trials are around Besanï¿½on, in the Franche Comtï¿½ region on Monday 9th July.
From 11th July to 13th July, riders will be attacking the high hills of the Bugey and the Alps.  France's national day, 14th July, will see them sweating it out in the dry Mediterranean hinterland, between St. Paul Trois Chateaux, in the Rhone valley, and Cap d'Agde on the Languedoc coast.
From 15th - 19th July, the race comes to the Pyrenees, firstly the foothills, then the high Pyrenees.  On 20th July, riders head north from Blagnac - a suburb of Toulouse - to Brive la Gaillarde, through the gentle hills of Gascony and Quercy.  Then it's back for two days close to Paris, Saturday 21st for time trials near Chartres, and Sunday for the final sprint from Rambouillet to the finish on the Champs Elysï¿½es.


Click for Cycling in France
A guide to cycling in France: rules, long-distance cycle routes, essential cycling vocabulary, and more
The race can be watched anywhere along the route: near the start of the day's leg, riders tend to be very bunched, and the actual race passes in about a minute. Towards the end of a leg, riders are more spaced out, so the thrill of the race lasts longer. However most of the spectacle comes not from the riders themselves, but from the "caravan", an hour-or-more long procession of cars, floats and motorcycles from the Tour's sponsors and the teams. It's all very commercial, with freebies being thrown out to the spectators; cheap baseball caps, little packs of sweets, mini-pretzels, keyrings and other gimmicks. It's interesting to watch, and the kids love it. But if its the actual race you want to see, then it's far better to watch it on TV where the cameras follow the riders from start to finish.

Cycling is not just the Tour de France, but is a popular leisure activity. Click for more information on cycling in France and France's network of cycleways.
Copyright About-France.com 2012