A guide to the Auvergne and its tourist attractions

You are here :
France  ›
Regions of France  ›  Auvergne
About-France.com - the connoisseur's guide to France

An introduction to the Auvergne

Auvergne's capital city, Clermont Ferrand, lying at the foot of an ancient volcano, is a city of a quarter of a million inhabitants, best known in France as the home of the Michelin tyre company. It is a busy regional capital, a university city, and is very much the region's economic hub; indeed it is the only major urban centre in this largely rural region.

Golf and sailing are among the leisure activites that can be enjoyed at Vichy, one of France's most famous spa towns
Auvergne is made up of four departments, the Allier (03) in the north, the Puy de dôme (63) in the middle, and the Cantal (15) and Haute Loire (43) in the south.
The Allier department , chief city Moulins,  is a prosperous agricultural department, an area of wide valleys and gently rolling hills. Vichy, in the south of the department, is an elegant spa town famous for its mineral water.
The Puy de Dome  department, centred round the regional capital Clermont Ferrand, is also famed for its mineral water, and several well-known types of mineral water, notably Volvic, come up from the mineral-rich volcanic rock that characterises this area. At the centre of the Puy de Dome is a very fertile alluvial plain, known as la Limagne; either side, the land is much higher, with the northern end of the main Massif Central in the west, and the mountains of the Livradois and Forez in the east. The Auvergne Volcanoes area, notably the Massif du Sancy, culminating at over 1800 metres, are popular holiday areas, and offer skiing in winter. Generally speaking, Auvergne is a region very popular with hikers and ramblers.

The massif du Cantal is for serious hikers
The two departments of the south of Auvergne, essentially upland areas, are also popular for rural tourism. Much of the Cantal department lies at an altitude of over 800 metres; large areas of these uplands are barren and treeless, such as the wide rolling grasslands of the Cézallier. Cattle graze the uplands in summer, and the Cantal is famous for its cheeses, notably the eponymous Cantal, but also other cheeses such as Salers. At the centre of the Cantal department lie the Monts du Cantal, a great volcanic bulge in the crust of southern central France. In the far southwest corner of Cantal, the land drops off into a much gentler area bordering on the Lot department.

12th century frescoes in St. Julian's basilica, Brioude
The Haute Loire department is another largely an upland area, but it also has relatively lower lying areas consisting of the upper valleys of the Allier and Loire rivers. In all but the high plateaux of Haute Loire, the houses traditionally have roofs of "roman tiles", a Mediterranean influence from bygone times which has contributed to the nicknaming of this department as "le Midi de l'Auvergne". The  Haute Loire is particularly rich in historic sites, with three of Auvergne's four  Michelin 3-star ranked sites (see detail below), as well as medieval castles, lots of old churches with historic frescoes, kayaking on the Allier and the Loire, and lots of hiking and mountain-bike trails. The small city of Le Puy-en-Velay, with its remarkable cathedral, one of the historic starting points on the medieval pilgrimage route to Santiago de Compostella.
A very rural region, Auvergne has not traditionally been a major tourist destination. Apart from the spa resorts of Vichy, Le Mont Dore and Chatel Guyon, Auvergne traditionally had little tourist infrastructure. Even the ski resorts of Besse (63) and Super Lioran (15) are small scale affairs. It is perhaps in part on account of the lack of tourist facilities that in 2009, when tourism in general fell by 6% in France, that tourism in Auvergne bucked the national trend. While other regions saw a drop in tourist activity,  tourism in Auvergne increased in 2009 by 6% on the crest of the surge in popularity of camping, hiking and outdoor pursuits, for which this region offers some of the best opportunities in France.
The Auvergne is increasingly popular with cyclists, particularly or its huge opportunities and many marked circuits  for mountain biking and cycle tourism. It is crossed by three waymarked long-distance cycle routes, the V70 Via Allier, the V73 Via Fluvia  and the V74 Volcanoes cycleways. There are also large numbers of local cycle circuits for different types of cyclists - from hard-core mountain bikers to leisurely e-bikers - particularly in the Haute Loire department around Brioude and Le Puy.

Staying in the Auvergne

While there are hotels in the few cities and in  many of Auvergne's small towns, a popular option for holidaymakers wanting to enjoy Auvergne's great outdoors is to stay in a gîte, i.e. a furnished self-catering holiday cottage. there are plenty of these in Auvergne, and generally they offer excellent value for money.


Main tourist attractions in the Auvergne

Historic and natural heritage sites, towns, castles, villages and even a Gallo-Roman mine to visit.
Four sites in Auvergne get the top Michelin Green Guide 3-star ranking... The cathedral and the St. Michel de l'Aiguilhe chapel in Le Puy en Velay (43), St. Julian's basilica in Brioude (43), and Notre-Dame du Port in Clermont-Ferrand (63).

Art-nouveau elegance in the spa town of Vichy 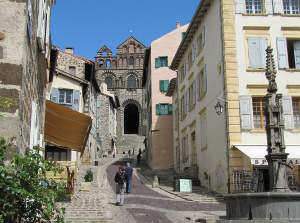 About-France.com   Home page -  Site search  -  Regions  -  Maps of France  -  Contact
In 2016 Auvergne was chosen by Lonely Planet as one of the
top ten regions of the world to visit.
" Auvergne has long been overlooked for being too peaceably rural. But that’s all changing, as French travellers weary of tourist-clogged rivieras seek escape here. The Auvergne has responded by reinventing itself with ambitious art projects and a portfolio of wilderness adventures, without ever losing its small-town charisma."


See also: through France on byroads - part 2. Byways through the Auvergne 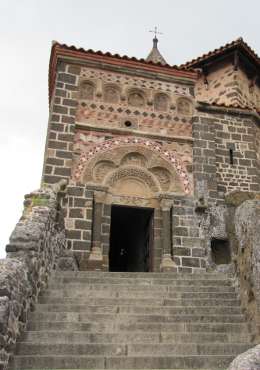 Chapel of St. Michel de l'Aiguilhe, le Puy
Xth to XIIth  centuries... and 268 steps up on its rocky pinnacle.

Kayaking for all on the River Allier, in the Haute Loire

Eiffel's Viaduc de Garabit, in the Cantal, seen from the A75 motorway rest area.


No trip to Auvergne is complete without a visit to Brioude 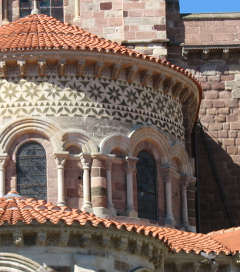 ♦ Selected by Michelin as one of the best small towns in France.
♦ Unique 11th century basilica with frescoes and mosaic floors
♦ International watercolor biennial in July. Major de Staël exhibition Jule-October 2021
♦  Lacemaking museum.
A beautiful historic town at the heart of the High Allier "Art and history area", with fabulous landscapes and historic monuments.
"Absolutely worth a visit"
80 km south of Clermont Ferrand
A75 exits 20 to 22
Brioude South Auvergne
Tourist office

Cookie information. About-France.com uses cookies solely to enable audience statistics, social media and some ads. About-France.com does not collect any personal data. If you are OK with this, click   or otherwise click for further details