One of the great small towns of France

Brioude - small-town France at its best

Interior of Saint Julien's basilica, seen from the gallery of the narthex.
One question that is commonly asked about Brioude is "How come it's not better known?"
The answer is simple. Unless they are located close to big cities, or in particularly popular tourist areas, France's small towns are not well known – however interesting they may be.
The best of France's small towns are for connaisseurs, and Brioude has a strong claim to be at or near the top of the list of interesting and attractive places to visit, for a day trip or for longer.


A short History of Brioude

The town's history goes back to Roman times, when "Brivas" was a small garrison guarding the crossing of the river Allier on the road from Augustonemetum (Clermont Ferrand) to Rouession (near Le Puy). The Roman garrison was located just south of the current town, at a point that is now the pretty village of Vieille Brioude – but nothing remains of the Roman site.

Decorated 12th century romanesque apse of St. Julien's basilica.
The new town of Brioude grew up from the 4th century onwards at the site of the shrine to Saint Julian. Julian - Julien in French -  was a Roman centurion martyred for his Christian faith, and the shrine in which are preserved to this day some of his relics, is located in the crypt of Saint Julien's basilica the great historic pilgrimage church in the middle of Brioude.
The original shrine of Saint Julien dates back to the 4th or 5th century, and by the end of the sixth century it was attracting pilgrims from all over France. By the ninth century, Brioude had become one of the five main cities of Auvergne. The shrine of Saint Julien was protected by an important monastery, among whose canons was Odilon de Mercoeur, a local man, who later went on to build the largest church in Christendom, the abbey church at Cluny in Burgundy.

Brioude, the old town. 1. St Julien's Basilica.  2 Doyenné arts centre.
3. Lace museum.  Orange circles: small art and craft galleries.
The aquarium is 100 metres off the bottom of the map
In the 11th century, the original Gallo-Roman sanctuary was demolished to make way for a grand new basilica, the church which stands to this day; but while Saint Julien's shrine remained an important pilgrimage centre over the following centuries, the importance of Brioude as a town diminished. Most significantly, its relative decline was due to the fact that Brioude was not located on any main line of communication. Situated at the edge of a fertile plain - la petite Limagne - and surrounded by mountains on all sides except the north, Brioude was often cut off from the rest of France in winter. The area's medieval exports, wine and wood, all went north, floated down the river Allier to the Loire and on to Paris. Brioude was not even on the main medieval pilgrimage route to Compostella, which started from le Puy en Velay, further south; but the shrine of Saint Julien nevertheless  brought pilgrims through the town on a less important Compostella pilgrimage route that ran down the valley of the river Allier.
Though the arrival of a railway in 1857 brought Brioude much closer to the regional capital Clermont-Ferrand, and, from 1867, gave the town a new faster route across the Cevennes to the south, Brioude remained a small town, a local capital with its markets, its fairs, and its mainly agricultural economy. It is in part for this reason that Brioude's urban fabric, with its traditional architecture,  was never disfigured by aggressive modernisation in the nineteenth and twentieth centuries.

Attractions and monuments in Brioude

There are a number of small art and craft galleries in Brioude, including the Maison de Mandrin (exhibitions all year), the Mirandelle tearoom (watercolours) , Couleurs Dentelle (lace and objets d'art), and other small galleries. However it is essentially in the summer that Brioude comes to life as an art centre.
In addition to the Deanery arts centre, every other year (mid July in odd-numbered years) Brioude is home to France's premier water-colour event, the Biennale de l'Aquarelle (website) , with watercolourists from around the world. There are a number of smaller exhibitions in Brioude and surrounding villages.
Music : There is an extensive programme of musical events in and around Brioude in the summer months, with up to half a dozen concerts in St. Julien's basilica, and many more concerts in historic churches and other locations in the surrounding areas. See concert programme  . Brioude also each year hosts a couple of concerts in the framework of the renowned  La Chaise Dieu festival of classical music.


► For more on Brioude and its area, visit the Brioude - South-Auvergne  tourist office

In the area of  Brioude

The medieval chateau at Saint Ilpize

Brioude is the centre for the beautiful Haut Allier area, a designated "art and history" heritage area covering the valleys of the Allier and tributaries. The area covers the valleys of the Allier, the Allagnon and the Senouire, including two "plus beaux villages de France", and many other and natural historic sites.
The Haut Allier is remarkable in that in addition to being a historic heritage area, it is also a stunning natural heritage area,  with unspoilt natural environments rich in wildilife, and an area with a rich historic and cultural heritage.
Among the most interesting sites are


Further afield (less than an hour... from closest to furthest) 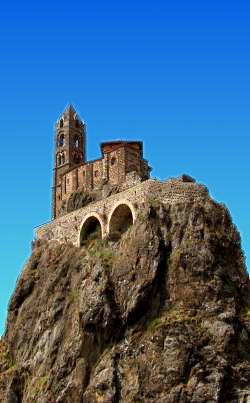 
How to reach Brioude

★★ Hotel Evan, Lempdes
Close to the junction of the A75 motorway and the N102, 15 km north of Brioude. Free parking, restaurant.

Restaurants
Brioude has plenty of restaurants for all tastes. Particularly recommended are the restaurants at the Hotel de la Poste, the Hotel la Sapinière, and the Pizzeria Saint Julien, just beside the Basilica. The town also has small gourmet restaurants, a Vietnamese restaurant and a MacDonalds.

Supermarkets
On the northern approach to the town there is an Intermarché and a large Carrefour Market. Close to the town centre, near the Aquarium, there is a Casino supermarket.

Folk musicians in traditional Auvergne dress, at the Saturday market in Brioude

A black bear dozes in a treetop at the Auvergne wildlife park, Ardes sur Couze,  45 minutes from Brioude

Map enhanced from an open-source original by Openstreetmap. org

This site uses cookies, and by continuing to use our site you are agreeing to this. To remove this message click or else ask for more details