Impresionism - the beginning of modern art

► You are here:   France  ›
French art and culture  ›
History of art  ›
Impressionism

The reinterpretation of light


The origins of Impressionism

Monet: Impression - soleil levant.  Paris Musée Marmotttan
The name "Impressionism" was derived from a painting of the port of Le Havre exhibited by Claude Monet at an exhibition of avant-garde artists in 1874 , and entitled Impression soleil levant - or in English "Impression, sunrise" (visible at the Musée Marmottan, Paris). Writing in the Charivari magazine, art critic Louis Leroy used the word from the title of Monet's painting to ridicule this unconventional type of art, calling the group of artists "Impressionists"; and the name stuck.

Turner - the Slave Ship (1840) Museum of fine arts, Boston
Yet if Monet's manner of rendering an impression was original, the technique of giving an impression, rather than a clear-cut image, was not something invented by the Impressionists.
Generations of painters had filled the backgrounds of their formal works with impressions, for example impressions of light or of landscape as with Claude Lorrain, impressions of darkness with Rembrandt. Among the pioneering landscape artists in France in the mid 19th centuries (see Naturalism), artists like Corot and Daubigny began rendering the play of light in skies or on water, through impressionistic brushstrokes, much in the way that later became the hallmark of Impressionism ; even more impressionistic were many of the works of the seascape artist Eugène Boudin, who retroactively has come to be known as a "Pre-impressionist".

The early Naturalist painters made no secret of their indebtedness to the masters of English landscape art from the early years of the 19th century, in particular Constable and Turner
Indeed, the term "Impressionist" has been used by more than one  art historian to describe the technque of Turner. Like the French Impressionists, Turner became fascinated with the effects of light, and many of his most famous paintings, such as Snowstorm at sea or The Fighting Temeraire, are essentially impressionistic, depictions of the play of light through air and water. Monet, who visited London more than once, and painted many pictures of Thames, was familiar with the work of Turner; and even if he did not imitate Turner (in the way that Turner had reinterpreted works by Claude Lorrain), Impressionism sprang out of a metamorphosis in the language of painting that clearly traced its roots back to English landscape art. The emergence of "modern" art was a long process, moved along by many radical and innovating painters. Monet and the Impressionists were an important part of this process.


Impressionism - the beginning of modern art 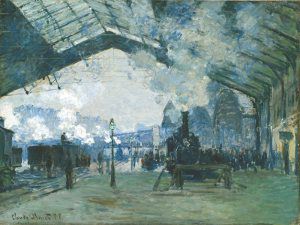 More radically than any artists before them in France, Monet and the Impressionists took painting in a new direction, and they did so at a time when society was changing fast..
Resolutely modern, they seized the opportunity to paint not just landscapes and people, but all aspects of the changing society in which they lived.
Monet was one of the first artists to find inspiration in street scenes and railway stations.
Impressionists strove to escape from the longstanding tradition of painting as a subjective rendering of objective and unmoving reality, towards capturing the ephemeral moment in time, its light and its movement. Turner had done the same half a century earlier, but he had done it in a different way ; the Impressionists painted not just light, but the way it played on surfaces, on water, on snow, through haze and clouds and steam, on leaves and on walls; they painted landscapes, cityscapes, buildings, nature, portraits and a lot more too, but they did not all do so in the same way, and not all the works of the painters generally considered today to have been Impressionists, fit the definition of Impressionism.

Impressionists - a movement, not a school

Impressionism was not a school, not even a cohesive group of artists all working together: it was a label attached to a fraternity of a dozen or so radical artists most of whom exhibited their paintings together in Paris between 1874 and 1886. Most were French, but not all.
The term Impressionists is frequently misused to include other late 19th century and early 20th century artists who went on to innovate in other ways, and are more correctly referred to as Post-Impressionists.

The work of Monet, which gave Impressionism its name, has come to epitomise the Impressionist style, as it is generally perceived today. Working in a very similar vein were three other artists, Camille Pissarro, Alfred Sisley, and Berthe Morisot. Rather different was Edouard Manet, more of a realist, who even objected for a long time to being bracketed together in artistic terms with Monet

Paul Cézanne - View of l'Estacq -  1882-83 .  Private collection
and Renoir. Although he was friends with both these artists, and with other Impressionist painters, Manet refused to take part in the Impressionist exhibitions.
The three other major members of the Impressionist fraternity, Paul Cézanne, Auguste Renoir and  Edgar Degas, painted in styles that were quite distinctive and also rather different from the "classic" Impressionist style of Monet. Two other artists frequently referred to as Impressionists, Paul Gauguin and Vincent Van Gogh (see Post-Impressionism), were not part of the movement, though strongly influenced by it, particularly Gauguin who for a while worked with Pissarro and occasionally with Cézanne.
The Impressionists were not a united fraternity, and they were not initially hailed as great painters – rather the reverse. For much of their lives, apart from Degas and Manet who came from wealthy families, most Impressionist painters lived in relative poverty and had difficulty selling their painting.
Yet in an age when "avant-garde" was a term of disapproval, the Impressionists were championed by a few forward-looking dealers, and in particular by the art dealer Durand-Ruel who eventually found a market for Impressionist art outside France, notably in London and New York. In due course the French art establishment took note, and thus by the end of the nineteenth century these previously derided artists were starting to gain recognition even in official circles. In his later years, Monet was actually hailed as one of France's great artists, and some of the waterlily paintings were painted on commission for the French government.

Though the Impressionist movement numbered hardly more than a dozen artists, it unlocked the genie of innovation that was to radically transform French and world art in the decades to come. It was but a short step from Impressionism to the multiple facets of Post-Impressionism, and from then on to Fauvism, Expressionism, Cubism and beyond.

Among the realities that Monet illustrated in his work was the way light conditions affect the way we see objects. To sophisticated modern audiences surrounded by images, this may seem rather obvious; but to many 19th century viewers, Monet's paintings of Rouen cathedral, so different under different lighting conditions, were an eye-opener.

The About-France.com guide to art in France :


Where to see works by the Impressionists in France

Many French art galleries have a handful of works by the Impressionists in their collections; among those with larger collections are:

Photos: all photos on this page are in the public domain.

Impressionism- 1860 - 1890
The artistic movement that has come to epitomise French painting was very short-lived. It was the movement of a single generation, and of only a dozen or so painters within that generation. Yet the anti-establishment revolution set in motion by the Impressionists released the genie of innovation that was to fundamentally change the rules of pictorial art from that time on.


Photos: all photos on this page are in the public domain.