Art in France up to the Middle Ages

About-France.com - the thematic guide to France
► You are here:   France  ›
French art and culture  ›
History of art  ›
From Prehistory to Medieval times

Art in France from prehistory to the Middle Ages


This page looks at the early history of art in France - notably painting - from prehistoric times up to the  Middle Ages. 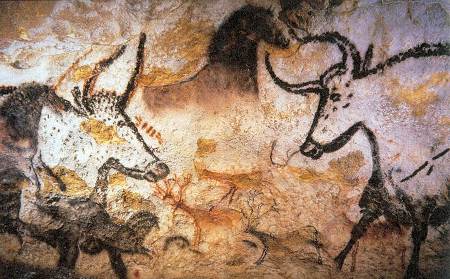 Cave painting at Lascaux
People have been painting in France since prehistory. The magnificent cave paintings at le Chauvet in the Ardèche - dating from around 30,000 BC, are among the world's oldest, far older than other fine examples of Paleolithic art in caves at Pech Merle, near Cahors, or Lascaux. These are all art produced in what is now France, but to call them French art would be quite inappropriate.  French art did not begin to exist before France came into existence, and even in the time of Charlemagne, in the ninth century, art was not national; where it existed, it was either part of a European culture, spread through the networks of pre-medieval monasteries, or else it was local - largely out of touch with even what was going on even in the next town.

Little remains of French painting from before the year 1000 AD; the great centres of painting in Europe before this time were in Italy, Byzantium and to a lesser degree Spain; but not in France. It was only with the emergence of medieval Europe from the tenth century onwards that France (that is the area of Europe that is now France) became a key player on the international stage.

Detail of the 11th century fresco in the baptistry at Poitiers - depicting Christ.
It was the development - in France - of the Romanesque style of architecture - known as the Norman style in England - that gave a new impulse to the art of painting. Many, if not most, of France's fine new Romanesque churches were lavishly decorated with frescoes and murals; classic early examples are to be found at Saint Savin sur Gartempe,  and in the 11th century frescoes decorating the 9th century Baptistry at Poitiers, France's oldest surviving church. One of the finest examples of Romanesque sculpture is at the Sainte Foy church, in Conques (See Conques photo gallery). French Romanesque art owed much to the Byzantine tradition well established in Italy and the near East, styles that would have been seen first hand by Crusaders, travelling clerics and merchants of the day. While the Romanesque style in architecture was gradually superceded by the Gothic style from the12th century onwards, paintings in the Romanesque style continued to be used to decorate churches in France, particularly in rural France, 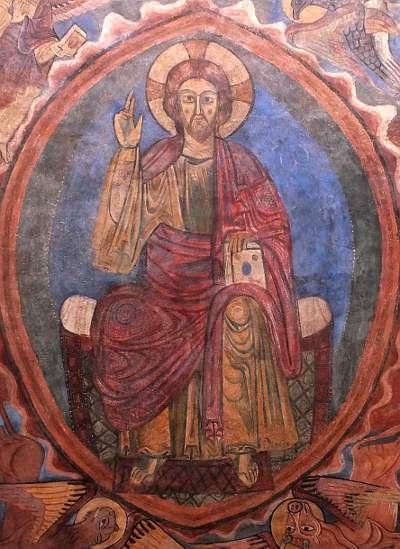 12th century Byzantine style fresco in the Basilica of St Julien, Brioude, Auvergne
until well into the 14th century. There are many fine examples of  Romanesque mural art tucked away in small churches in rural France, and even in bigger ones such as St. Julien's basilica in Brioude, specially in the southern half of the country
France has relatively little in the way of painting from the early Gothic period;  the finest examples of early French Gothic art - as opposed to architecture -  are in the form of stained glass, as in the cathedrals at Chartres or Laon or Bourges, or sculpture, notably the many fine examples of gothic sculpture adorning French cathedrals. Like the Romanesque style, the Gothic style of architecture was one that developed in France, from where it quickly spread to much of Europe, and in particular to England which, at the time, being ruled by Normans then Angevins, was an integral part of the French cultural area.
Gothic architecture reached its finest expression in the great 12th and 13th century cathedrals of northern France and England: inFrance, the finest medieval Gothic cathedrals are in Paris, Amiens, Reims, Rouen, Strasbourg and Beauvais.
By the 14th century however, a different art of painting was developing rapidly in France, the art of the illustrated manuscript. Of particular importance were French "Books of hours", prayer books comprising prayers, psalms and biblical texts, many of which were lavishly illustrated. The most famous of these is the Très Riches Heures du Duc de Berry, which contains over a hundred page illustrations depicting, among otherthings, contemporary life.

Gothic sculpture on the facade of Notre Dame Cathedral, Paris
At the same time, what can be considered as the first "modern" school of European art was taking hold in parts of France. The International Gothic school of painting spread to large parts of Europe - in particular Flanders and Bohemia - thanks to the international development of trade, increasing cultural links, and marriages among Europe's royalty and aristocracy. In France, the most important centre of the International Gothic movement was the Burgundian court. Dijon, the capital of Burgundy, has some of the finest surviving examples of International Gothic art in France, in the form of statues and sculptures by the great Flemish artists Claus Sluter and Jacques de Baerze.


The About-France.com history of art in France :

Photos: all photos on this page are in the public domain.


France is famed as one of the world's great centres of art and culture.
France's medieval heritage is magnificently displayed through the great historic monuments that have come down to this day - notably cathedrals, churches and castles. Medieval French painting is less well known.