About-France.com - the connoisseur's guide to France
► You are here : France › Heritage cities ›   Dijon

Dijon - the capital of Burgundy

Parking: the blue dots show parking lots near the tram route. Traffic access to the historic centre is limited, but there are numerous car parks and plenty of street parking too.
Just an hour and a half from Paris by high speed train, Dijon, the capital of the modernday region of Bourgogne - Franche- Comté, is a city with a very proud past.
In the Middle Ages, the Dukes of Burgundy were second only in power to the Kings of France: and indeed for much of the Middle Ages, the Dukedom of Burgundy was to all intents and purposes an independent state, separate from and at times at war with the Kingdom of France.
In the 14th and 15th centuries, the Duchy of Burgundy was a major European power, whose territory stretched at its peak from the North Sea (Flanders, Artois and Picardy) to the border with Switzerland, and Dijon was its capital.
Since the regional reforms of 2016, Dijon has become the smallest regional capital in France apart from Orleans , and no longer occupies the position of importance that it enjoyed in medieval and Renaissance times . With a population of just over 150,000, it is far smaller than the big provincial capitals of France like Lyon or Toulouse or Strasbourg. In 2015, its historic centre was listed as a UNESCO world heritage site.
Located at the northern end of the main Burgundy vineyard area, Dijon is nowadays best known as one of the wine capitals of France, and also for its famous mustard, la Moutarde de Dijon, which is known worldwide. Don't expect however to find a city surrounded by mustard fields; the yellow fields that can be seen round Dijon in the spring time are fields of colza, or oil-seed rape, not of mustard. Most of the mustard used in Dijon mustard these days comes from Canada... and since Dijon Mustard is not an IGP, little of the Dijon mustard bought in supermarkets, or even in delicatessens, actually comes from Dijon.
Dijon is reputed, nevertheless, as one of France's great gourmet cities, and its annual food fair, held each autumn, is the sixth largest international fair in France... and open to the public.

Rue de la Verrerie, in the old centre of Dijon
Classed as a Unesco world heritage site in 2015, the centre of Dijon is an attractive late medieval and Renaissance city centre.
At the heart of the old city, the Palace of the Dukes of Burgundy, most of it dating from the 18th century, is the most impressive of the old buildings in Dijon. It today houses the city hall,  the tourist information office, and the history museum, a free museum with artefacts relating in particular to Burgundian life and history..
Climb to the top of the Tour Philippe le Bon, the tower in the centre of the photo above, for a panoramic view over Dijon.

Dijon art gallery - Portrait of Philippe le Bon, school of Rogier van der Weyden
Part of the palace also houses the Dijon city Fine art museum, which is one of the oldest and largest in France outside Paris. And it's free (which is nowadays fairly unusual in France) ! It includes a large collection of paintings from the Middle Ages to the 19th century, and notably  works by the Maître de Flémalle, Titian, Veronese, de Latour, Tiepolo, Delacroix, Monet, Manet, Sisley, Cross and Rouault.
Running north from just behind the fine art museum is the Rue de la Verrerie, one of the most interesting old streets in the city, with its overhanging half-timbered houses.  Running west from the Place de la Liberté is the Rue de la Liberté, one of the main city centre shopping streets; just off this busy pedestrian street, discover the Place Francis Rudé, from which you can follow the rue Rudé, then right into the attractive rue Musette, with its boutiques and cafés.  This will take you most interesting old church in Dijon,  the 13th century church of Notre Dame, with its very unusual western facade  decorated with three superimposed rows of arches. The facade is also decorated with 51 dummy gargoyles  (real gargoyles  carry away rainwater, "dummy" gargoyles are just decorative). Today's gargoyles are not medieval; the medieval facade was indeed decorated with gargoyles, but these were later removed arter a fatal accident, and  those that decorate the facade today were put up in during restoration of the church in the 19th century.
Two other historic churches in the protected central area are worth visiting: Saint Benignus Cathedral is a 13th - 14th century building in a rather severe Burgundian gothic style; by contrast the 16th - 17th century church of Saint Michael, standing 200 metres east of the Ducal Palace. is unique in France, having been started in the gothic style, and completed, notably the west facade and the towers, in the new Renaissance style.
Dijon has two other points of interest for those with an interest in art. The Musée Magnin contains  the remarkable collection of a 19th century collector, Maurice Magnin, who acquired over 2000 works of European art from the 16th to the 19th century; including works by Breughel the younger, Cariani,  Le Sueur, Bastien-Lepage and Géricault. The museum, with its paintings and decorative arts,  is housed in a 17th century residence, the Hôtel Lantin, just opposite the Ducal Palace
The other notable work of art is an early Renaissance sculpture, the Puits de Moise, in the gardens of the Chartreuse hospital. It is located just south of the railway tracks just after the western end of the railway station. Sculpted around 1400 by the Dutch sculptor Claus Sluter, it is a memorial for Duke Philip the Bold, and is considered the finest example of late gothic sculpture.

Places to visit near Dijon 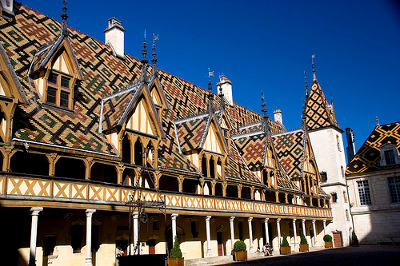 The remarkable medieval hospice in Beaune - centre for the Burgundy wine trade
The Burgundy region is renowned worldwide for one key product: its wines, reputedly among the best in the world; but the actual vineyard area of Burgundy is only a small part of the region, occupying as it does a strip of land on the western edge of the Saône valley, running south from Dijon.
There are some other smaller wine producing areas in the north of Burgundy, notably the area round the small town of Chablis. for more on Burgundy wine, see French vineyard areas.

Among the most popular sights and attractions in the area around Dijon are..

Click here for a ► choice of hotels in Dijon at best online rates, and the About-France.com hotel selection for Dijon.

There is plenty of hotel accommodation in Dijon. For visitors arriving by train, there is a choice of hotels near the railway station or between the station and the old city centre. Visitors arriving by car have the option of either staying in or close to the centre, which may involve additional parking expenses, or else taking a hotel on the outskirts of town and travelling in to the centre by public transport, notably the tram.


Out of town hotels with tram access to the centre

Visitors arriving on the A31 motorway from the north should exit at junction 4, then leave the motorway feeder road at the first exit, following signs for Saint Apollinaire. This will bring them into Dijon on the old D70, where there is a choice of budget and mid-range hotels, within 500 m of a tram stop. Ibis budget,  Campanile.  Carry on in on the D70 for a second Campanile hotel a kilometre closer to the town centre, or a bit further for a four star Mercure hotel. All these hotels offer free parking.
Visitors arriving from Paris should take the Dijon north circular road and circle the city as far as the exit marked D70 Vesoul (St Apollinaire), then follow signs for Dijon Centre or Saint Apollinaire.

For a large mid-range hotel with free parking close to the centre, check out the Ibis Dijon Gare , located just south of the train station. Easily accessible from the Paris direction: just follow Dijon Centre at the end of the A38 motorway, and enter the city on the old main road (D905).

The alternative is to take a hotel in town.  See the About-France.com selection

Dijon is a city with excellent  road and rail links, but no airport

Plan of Dijon from an open-source original from openstreetmap.org.

Photo top of page : the Palace of the Dukes of Burgundy

Region: Burgundy
Nearby cities: Besançon, Macon
Nearest airports: Paris Orly
Dijon is on the routes between:
Luxembourg and Lyon
Paris and Lyon ( A31 / A 32 from A6 and A5)
Population:  151,000
Main sites:  the palace of the Dukes of Burgundy, historic city centre, Musée des Beaux Arts
Nearby attractions:  The Burgundy vineyards, Beaune, Autun

Find and book hotels in and near Dijon. See full list and best rates with Booking.com

The About-France.com selection
Hotels for all budgets and all needs
★★★★ Grand hôtel La Cloche
Five star luxury, between the station and the historic centre. Classic hotel 700 metres on foot from the Ducal Palace

★★★ Hotel des Ducs
In the centre of the old town, 100m from the Ducal Palace. Easy access to all  main sights. Secure public parking close by.


Alternative places to stay in France

Gites and b&b in France
Independent hotels in France