Nouns are words that refer to creatures, objects, actions or abstractions. They are defined in French grammar by their gender (masculine or feminine),  their number (singular or plural), and their determiner.

►  All nouns in French have a gender, either masculine or feminine.
Animates: When nouns define human beings, the gender of the noun normally corresponds to that of the person or people concerned.  Thus un homme (masculine)  and une femme  (feminine). There are a few exceptions; the most high-profile of these is une personne (feminine), a person, whether the person is male or female.


Many nouns that can either refer to males or to females have masculine and feminine forms. In some cases an identical noun can be used in either gender: example un gendarme, une gendarme (a policeman / woman).  In other cases male and females are designated by a masculine and a feminine form of the same word: example un boulanger / une boulangère (A baker, a female baker).  In other cases there is little consensus; there is no clear rule in modern French as to whether a female teacher should be referred to as un professeur, une professeur, une professeuse, or une professeure. All four forms are used, even in official documents.

Inanimates: When nouns define objects or abstractions, they still must have a gender. The gender can sometimes be determined (or guessed) by the noun's ending.  While there are a few endings which are more or less exclusive to feminine nouns, such as -ette or -euse, the gender of most nouns just has to be learned case by case, and it is not always easy. Why does one say le coton, but la chanson? The reasons are etymological (historic) – but that is of little help: genders just have to be learned.

► Nouns in French must either be in the singular or the plural. The plural of most French nouns is indicated in written French by the addition of the plural marker, normally "s".
This s is not pronounced in spoken French.
Examples:  un homme, des hommes -  un tracteur, des tracteurs.

The plurality of a noun is also indicated by the determiner, and by any adjectives that describe the noun.

► Nouns cannot normally stand alone in French. Except in a small number of (mostly common) fixed expressions, such as j'ai peur, all nouns except proper nouns (i.e. names) – whether in the subject of predicate of a sentence – must be preceded by a determiner (un prédéterminant). This can either be:

In English one can say "Rosemary's baby". In French this must be "Le bébé de Rosemary"; in French, the determiner here is Le, not Rosemary's. (Except, of course, in the title of the classic movie which, in France, has always been known as Rosemary's Baby....  but that is English, not French! The movie title could never have been translated as Rosmarie's bébé.)

The determiner comes at the start of the noun group in French. It may be followed by one or more adjectives, from among those adjectives which, in French, precede or can precede the noun.

Examples:  The determiners are in bold type.

►  There is no need for anything to follow a noun; in French grammar a noun group can be considered complete as long as it has a determiner and a noun.

►  However nouns can be and often are followed by adjectives. Indeed, most French adjectives follow the noun.  Example: un livre intéressant.  See Adjectives

► Nouns can also be followed by (postmodified by) a prepositional phrase such as a possessive form with de. Example: Le livre de mon voisin. 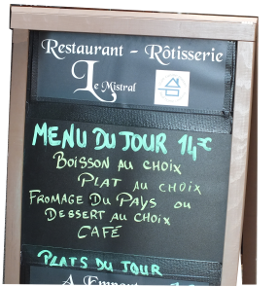 Lots of nouns on the menu...
Discover French food and eating on Eating in France

Get the Android app on Google Play Store

We respect your privacy. About-France.com does not collect any data from users. Cookies are used to enable interactivity and a few advertisements. To remove this message, click or get more details