About-France.com  - A thematic guide to France 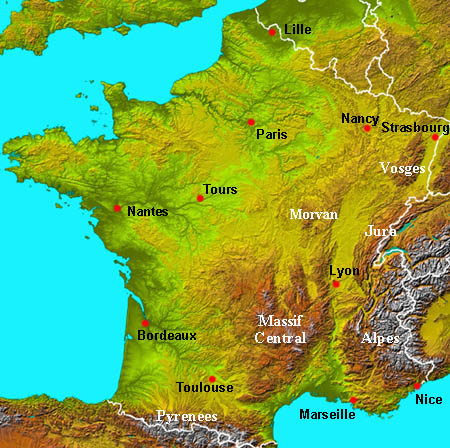 Topography: the highest point in France is Le Mont Blanc, whose summit is at 4,810.45 m (15,782 ft) above sea level . Le Mont Blanc lies on the border between France and Italy, just south of Switzerland, and is also the highest peak in Europe.
The second highest mountain range in France is the chain of the Pyrenees, on the Spanish border.
The largest mountain area wholly in France is the Massif Central: this area covers several contiguous areas of mountain, including the Monts d'Auvergne, the Monts du Forez, the Cévennes, the Aubrac, the Causses and the Montagne Noire.

Hydrographic basins
Groundwater in France drains away to four seas: the North Sea, the Channel, the Atlantic Ocean and the Mediterranean.
Most of the watercourses in  the southern two-thirds of France drain into the Atlantic, through the basins of the Loire, the Garonne and the Adour. The eastern watershed for this area is along the eastern edge of the Massif Central, reaching to within 25 miles of Lyon; the northern watershed runs generally speaking from central western Brittany to  about 100 km south of Paris.
Watercourses in southeastern and central eastern France mostly flow out to the Mediterranean, via the Rhone. Only the extreme south and southeast of the Massif Central, i.e. the southern edge of the Cévennes mountains, drains into the Mediterranean. Water from areas between the Morvan and the Vosges, notably the Saône Basin, flows south to the Rhone (the two rivers meet ant Lyon) , and thence down to the Mediterranean.
The extreme east of France, Alsace to the east of the Vosges and Lorraine to the north and northwest of the Vosges, have rivers that drain into the North Sea, directly or indirectly via the Rhine.
A small northwest quarter of France has rivers, notably the Seine and the Somme,  that  flow into the Channel.

Click here for detailed information on the regions of France., region by region.
Copyright notice: Website and text © About-France.com 2003 - 2021   except where otherwise indicated.
This map by About-France.com, based on and enhanced from an original by NASA, may be reproduced on educational websites as long as it is accompanied by a clickable link to About-France.com.
Cette carte peut être reproduite sur des sites éducatives à condition d'être accompagnée d'un lien cliquable vers About-France.com

About-France.com respects your privacy. This website does not collect personal data, and cookies are used solely to gather anonymous audience statistics,and enable certain essential page functions. To remove this message, click or get more details