This page is for pedal-cyclists, and does not concern motorcycling.

While France is certainly not as cycle-friendly as the Netherlands, and some parts of the country are distinctly lacking in dedicated cycle ways, cycling has a place close to the heart of many Frenchmen - witness the degree of national fervour aroused by the country's biggest annual sporting event, the Tour de France.

Leisurely cycling on the Atlantic cycleway, western France
At weekends in France, drivers on country roads know that it is advisable to look our for cyclists - either bunches of speed-cyclists on sleek bicycles preparing for or taking part in local races or championships; or just individual cyclists or families out for an afternoon ride. That is common all year round. In the summer months, local cyclists are joined on the roads and cycle-ways by an ever increasing number of international cycle-tourists, making the most of the opportunities that France offers for long-distance rides or circuits.


Bikes on trains in France

It is worth noting that cycles can be taken free of charge on many trains in France, notably on most "TERs", the regional express trains that cover the whole network; bike space must in theory be ordered when buying your ticket – but according to the French train company SNCF this service is not available online. On rural routes, the most common practice is to buy your ticket at the station for the next train - indicating that you have a bicycle. TERs are not usually full, except for commuter services.
The situation with regard to intercity expresses and TGVs is confused. Some take bikes for free, others charge; most of those that accept bikes have only limited space, and others don't take bikes at all.
The safest solution is perhaps to buy a lightweight bike bag in which you can carry your bike as hand luggage; bike bags count as ordinary  luggage, and there is no charge, and no reservation needed.

Click for best online rates for hotels near the following towns on cities and areas of France.

By far the largest opportunity for relaxed cycle-tourism in France is provided by the country's vast network of secondary roads and country lanes. France has some 880,000 km (550,000 miles) of roads - excluding motorways - and almost all of this network is open to cyclists. The vast majority of this road network is composed of very minor byways, where vehicle traffic is very light, and lorries few and far between. Cycling conditions on these roads are generally safe to very safe, meaning that cycling holidays can be planned throughout the country.
Cyclists interested in heading down through France to the Mediterranean could check out Byroads through France.  This route from Rouen in Normandy to the Camargue on the Mediterranean has been written for motorists, but the quiet byroads it follows are in most parts just fine for cyclists too.

The main dedicated and marked cycleways in France 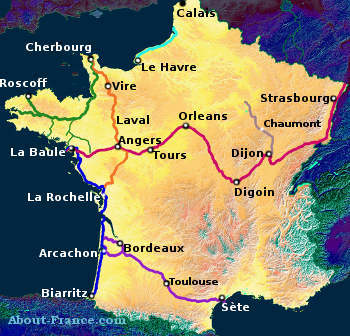 However, even safer than the minor road network is the constantly developing network of  long-distance cycleways which - if it can not yet be said to criss-cross France - does now offer a couple of thousand kilometres of  dedicated tracks where the most serious hazards are likely to come in the form of jay-walking pedestrian hikers or wandering wildlife.
The map on the left shows the six most substantially complete long-distance cycle routes in France today - plus a few other routes that connect with them. As the map shows, it is possible to travel safely by bicycle using marked and often dedicated cycle routes from the Channel to the Mediterranean, and from the Atlantic to the Mediterranean or to the German border. See below for essential route information.

The six most substantially complete long-distance cycle routes in France

► For detailed cycling map of France, see the Cycle.travel website

More ideas for cycling through France


Cycling in the French Alps

As do the French Pyrenees, The French Alps attract cyclists from all over the world. There are those who just wish to enjoy the spectacular scenery of the Alps at slow speed; and there are those who come to relive the exploits of the great mountain stages of the Tour de France - also at a slower speed.
Unfortunately for cyclists, the Alps also attract large numbers of motorists during the warmer seasons (June to September) when all Alpine passes are open to traffic.
For those just wanting to enjoy the alpine scenery, there are plenty of bike hire facilities (notably mountain bike hire) in resorts and other towns and villages all over the Alps. Cycling can be a great way to enjoy the Alps, as long as you stay clear of the busy through routes 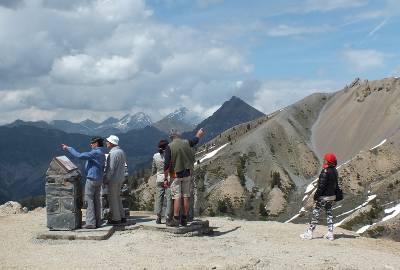 The col d'Izoard, in the Queyras regional park
For those in search of an enjoyable and quite strenuous Alpine cycle tour, About-France.com recommends the southern half of the French Alps, where there tends to be less traffic on the roads than in the more developed Savoy Alps. The following four or five day itinerary largely avoids the busiest Alpine routes. While climbs of up to 1200 metres (days 2 to 5) can be undertaken by reasonably fit cyclotourists carrying paniers and even very lightweight camping equipment, the climb from St.Michel de Maurienne to Grand Galibier should not be attempted on touring bikes carrying luggage – or at least, certainly not in a single day.

Highway code for cyclists in France.

NB. The lines below are given solely for information, and are valid at the time of writing. They do not constitute an exhaustive list of all laws and rules governing riding a bicycle in France, and may in time be changed..

A guide to cycling in France; the opportunities, the main long-distance cycle routes,  the highway code for cyclists,
and other practical  information. 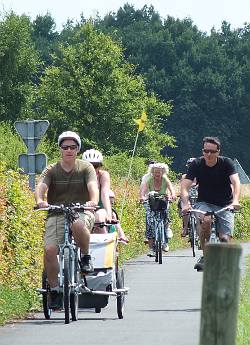 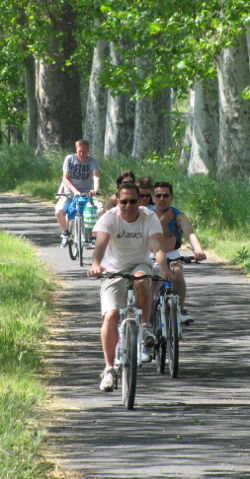 Cycle trail beside the Canal du Midi, in Languedoc


About-France.com is an independent user-supported website that does not track visitors, We may receive commission from sales made on our carefully selected partner websites.