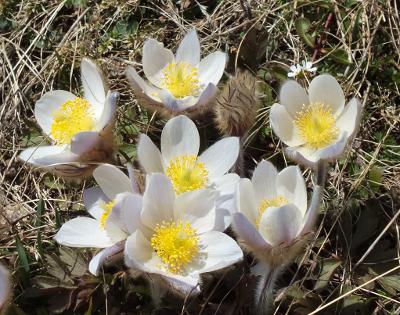 A short guide to wild flowers in France

As far as wild flowers are concerned, France can be a haven for nature-lovers, as long as they choose the right part of France, and the right time to go.
However this page is by no means a detailed guide to the flora of France. For that, the best idea is to visit France with a wild-flower guide in your luggage, or else to buy a local wild-flower guide for the region in which you are staying.
The purpose of this page is simply to help you decide where and when to visit France, if part of the aim of your trip is to enjoy the wildlife, and in particular the wild flowers.

Choosing where and when to visit France should not be too difficult. The best parts of France to visit, in order to discover the country's very rich and diverse flower life, are the mountainous areas in the south of France, and to a smaller extent in the east. Below an altitude of about 500 metres, most of rural France is given over to agriculture, which can be fairly intensive in many areas, leaving few areas of the natural environment in which wild flowers grow and prosper. By far the best areas for enjoying magnificent landscapes of wild flowers are the areas of mountain, from 500 metres altitude upwards, in the Alps, the Massif Central, the Pyrenees, the Jura and the Vosges.

While the Alps are intensely developed in and around busy winter-sports resorts, there are plenty more spots in the Alps where the natural Alpine pastures have been preserved.  Look for these particularly at altitudes of between 1000 metres and 1800 metres, where pastures are given over to grazing cattle in summer, and often snow-bound in winter. Whether on the flat, or on steep mountainsides, pastureland in these areas has suffered relatively little from agrochemical change, and natural meadows are filled with a colourful array of wild flowers. The best month to see and enjoy them is the month of June, though at higher altitudes, flowery Alpine meadows can continue to bloom until August.
The typical flowers of rich multicoloured Alpine pastures include wild sage (blue), thrift and types of clover (pink) cow-parsley and marguerites (white) and yellow daisies, all of which can be seen in the photo at the top of this page (except on small mobile devices)..

Slightly higher up, but still in grazing land, one can come across fields of wild narcissi; in late afternoon, the perfume can be incredibly scented.
The rarer, and more solitary wild flowers tend to be found at higher altitudes, where the land is under the snow for several months each winter. Don't expect to find edelweiss other than in high locations in areas such as the Vanoise national park; and never pick it anwhere in the Alps, in any country: the edelweiss is a protected species from one end of the Alps to the other. In fact, it's not a good idea to pick any high mountain flowers, as they are unlikely to survive anwhere other than in their natural habitat.
Among the other iconic high altitude flowers are gentians, which come in three main but entirely different forms. The big 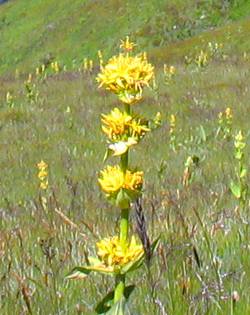 Tall yellow gentians in the Massif Central in late July

gentian is a tall plant with yellow flowers, flowering in mid to late summer, from the root of which "Gentiane" liqueur is made. The two other principal gentians are flowers that are vividly blue – an intense blue rarely found in other wild plants. You may also stumble across wild croci, which emerge shortly after the snows melt, or beautiful wild anemones, also known as pale pasque flowers (photo above).

Other areas
However, it is not only in the Alps that "alpine" flowers thrive in France. High mountain flora can also be found in high parts of the Pyrenees.
In central southern France, the hills and mountains of the Massif Central have abundant flower life, notably on account of the low population density in this part of France. Though intensive farming has spread to all parts of France, there remain large parts of the Massif Central where the land is still worked by smallholders, and given over to grazing cattle or sheep. Decades of population decline in this part of France, where much of the land is hard to work, have also left large areas largely undeveloped, and forest and scrub cover in this area of France has increased considerably in recent decades.
In April and May, many hillsides are ablaze with colour, as the yellow flowers blossom on the ubiquitous broom bushes. Hillside pastures, while not as profusely flowered as Alpine pastures in June, are home to cowslips, marguerites and several varieties of orchises and, in some dry areas, rare dark red pasque flowers.

Further north, the uplands of the Jura mountains, in Franche Comté, and the Vosges, between Alsace and Lorraine, still include many Alpine meadows, rich with wild flowers; but the tendency here is towards a reduction of the biodiversity, as farmers improve their grazing lands in order to produce more milk from their cattle from which come some of France's finest varieties of cheese. However, these upland regions are also areas of France in which organic agriculture has taken more of a hold than in areas of more intensive agriculture, so the prospects are not too bad.

Meadow of wild narcissi in the Massif Central (late June) 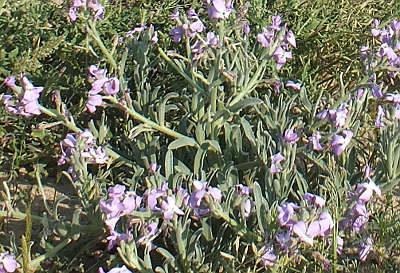 Sea stock, Matthiola sinuata, is one of the flowers that flourishes in sand dunes on France's Atlantic coast.

There are a large number of small nature reserves and larger protected areas in France. At the top end of the scale are the country's national parks, the largest of which are in the Alps. But as well as National Parks, France has 48 Regional Parks, or "parcs naturels régionaux", in which the natural environment is protected; together  these cover 15% of the surface area of France. The degree of protection depends on the nature of the park, as like in National Parks in the UK, Regional Parks are not normally wilderness areas; they are farmed and managed – but  with stricter environmental rules and wildlife protection than other areas of the countryside. As well as regional park areas, 12.5% of the total surface of France is protected within the framework of the European Union's Natura 2000 programme: many but not all Natural 2000 areas lie within national or regional parks.  A map of France's regional parks can be found here.
Within these areas, and indeed elsewhere too, there are smaller zones known as ZNIEFFs,  zones naturelles d'intérêt environnemental faunistique et floristique, similar to SSSI's in the UK, where flora and fauna receive extra protection. 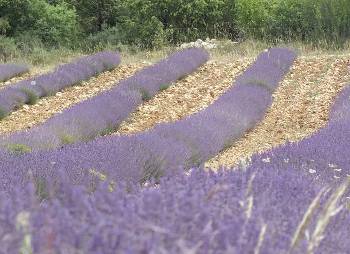 A lavender field near the Ardèche gorge - mid June

The dry Mediterranean hinterland is renowned for its aromatic flowers and plants, which explains how the small city of Grasse came to prominance as the capital of the French perfume industry. Lying inland from Nice, Grasse itself, with its perfume museums, is an interesting place to visit; but the best known symbols of the French perfume tradition are the fields of lavender, which attract many visitors. Lavender fields can be found on the arid edges of the Rhone valley, and into the foothills of the Provence Alps particularly in the departments of Vaucluse, Drôme and Ardèche. The first lavender fields are in flower by about mid June, those higher up in the hills - from 500 to 1500 metres in the Vercors and Verdon areas - a fortnight to a month later. The last lavender is harvested by mid August, in the higher lavender fields.
.

An Alpine meadow at about 1300 metres altitude, in early June. 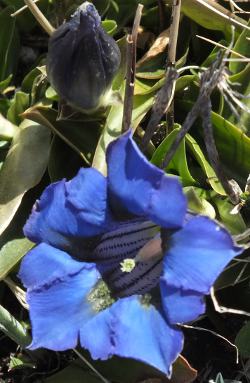 One of the intensely blue types of Alpine gentian. Early June


The text and all photos on this page are copyright About-France.com 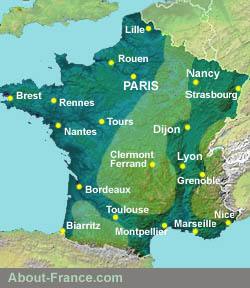 Empty France - the diagonal of sparsely populated areas, where wildlife is particularly diverse and abundant. The largest concentration of protected areas, national and regional parks, Natura 2000 areas, and other noted wildlife areas, is in the extensive mountainous areas of Southern France. 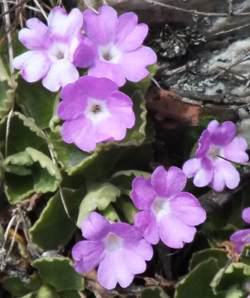