Things to see and do

About-France.com - the connoisseur's guide to France
► You are here : France › Heritage cities ›   Strasbourg
The historic capital city of Alsace, Strasbourg, is the second most popular tourist city in France, after Paris

The great west facade of Strasbourg's medieval cathedral towers over the surrounding buildings of the old city.
For visitors wanting to see Paris and one other French city - or indeed just one French city other than Paris, Strasbourg is the place.
Strasbourg is one of the great historic cities of Europe, and its history is very different from that of Paris.
In the year 840 AD, on the death of the Emperor Charlemagne's son Louis the Pious, the great Frankish "Holy Roman" Empire was split into three parts. West Francia in the west became the heartland of modern France. East Francia in the east became Germany; and between them lay Middle Francia – an area today made up of small states, Luxembourg Belgium, the Nether­lands,and Switzerland. Between Luxembourg and Switzerland middle Francia included the duchies of Alsace, Lorraine and Burgundy, which are today part of France. But this was not always the case.
Alsace, and with it Strasbourg, only became French in the 17th century. Alsace was French from 1648 to 1871, but during this time it remained German- speaking. From 1871 until 1919, and again from 1940 to 1944, Alsace was annexed by Germany.
While today the people of Alsace all speak French, the historic Germanic culture of the city of Strasbourg is tangible, and indeed part of the city's identity. Many signs are written up in both French and Alsatian (a dialect of German), or sometimes just in Alsatian; and signs on many historic buildings are written up using the classically German Gothic script.
As for wining and dining, Strasbourg's gourmet traditions are quite distinctive, and more German than French. Flammekueche is something between a quiche lorraine and a pizza, and choucroute, sauerkraut in English or German, is a major speciality. Another popular dish is baeckoffe, an oven-baked meat and potato dish.  Alsace and Strasbourg are also famous for their pain d'épices, a kind of spicebread or gingerbread, particularly in the runup to Christmas.
For a classic Strasbourg dining experience, visitors have a large number of Alsacian restaurants and Winstubs; the latter are typical Alsace restaurants, mostly furnished with wooden chairs and tables, decorated in Alsace style, and often housed in old half-timbered buildings. They are Alsace's equivalent of an old fashioned English pub, where people go as much to drink - in this case local Alsace wine - as to eat.

Old city fortifications and part of Petite France, by the river Ill
Strasbourg is the second most popular tourist city in France, after Paris; and there are three main attractions. Firstly the cathedral, the second most visited French cathedral after Notre Dame de Paris; secondly the picture-book historic quarter of Petite France, with its half-timbered medieval houses and its quays overlooking branches of the river Ill (that is the river " ill "); and thirdly the Strasbourg Christmas market. The Christmas market, or Christkindelsmärik, the market of the child Jesus, is the oldest and biggest historic Christmas market in Europe, and fills the squares and old streets round the cathedral for the whole of December.
Near Petite France is the Barrage Vauban, a 17th century covered bridge and walkway across the river.

Old Strasbourg, showing location of main sites. The map is about 1800 metres across. Tram routes in brown
But there is plenty more to see and do in Strasbourg too.
One of the great things about Strasbourg as a city-break destination, is that you can do so much on foot. The old city is quite small. Just next to the cathedral, in and around the Palais Rohan, is a cluster of museums, the most impressive of which is the Strasbourg art gallery, or Musée des Beaux Arts.  One of the best provincial art galleries in France, the gallery has a small but rich and representative collection of European art from the Renaissance onwards, including works by Giotto, Botticelli, Raphael, Rubens, El Greco, Van Dyck, Corot, Courbet and many more. The Palais Rohan, a fine eighteenth-century palace, also houses the Museum of Decorative Arts, and the Strasbourg Archeological Museum; and just across the street is the Strasbourg historical museum.

Sign outside a traditional Strasbourg restaurant
A single day pass for all the Strasbourg museums costs less than separate entrance tickets to two individual museums.
The pass also includes access to Strasbourg's other great museum, the Strasbourg museum of modern and contemporary art, or MAMCS. Very easily accessible – just a short walk from Petite France across the Barrage Vauban,  this is a small but good modern art gallery, opened in 1998. Its permanent collection contains works from the Impressionists onwards, including Monet, Sisley, Renoir, Signac, Vlaminck, Picasso, Braque, Chagall, Miro, Magritte, Kandinsky and many more.
The other popular tourist attraction in Strasbourg is to take a boat trip on the river Ill. Boats leave from in front of the Palais Rohan, by the museums, and take visitors round the island in the river Ill on which the historic city of Strasbourg is built.

In the area - northern Alsace

The historic city of Strasbourg lies a mile from the Rhine, in the fertile valley that is flanked to the west by the Vosges mountains, and to the east by Germany's Black Forest. Both are easily accessible from Strasbourg.

For a quick trip into Germany, it is very easy to drive or take the train across the Rhine to the German town of Kehl, but that is not terribly interesting. A more interesting trip is to drive or take the train to the town of Offenburg, 25 km (15 miles) from Strasbourg, a town with an attractive centre...  but not as attractive as Strasbourg.
A day trip into the Vosges can combine a visit to the impressive Chateau du Haut Koenigsburg 60 km south of Strasbourg, near Séléstat, and near there to the picturesque small Alsace wine-route town of Kaysersberg, birthplace of Albert Schweitzer. 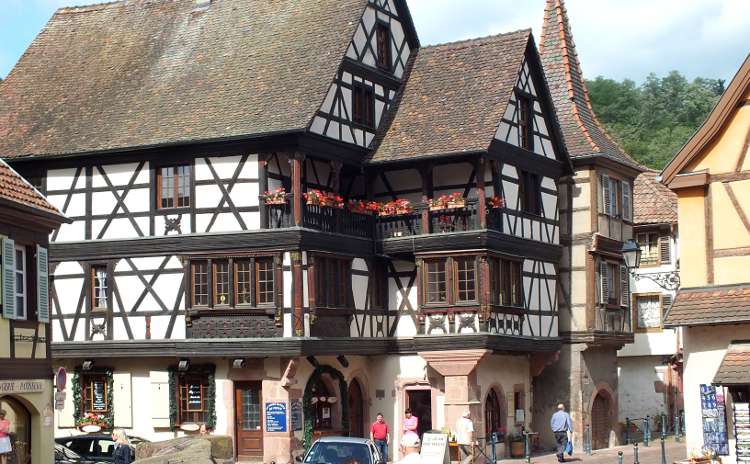 Many very pretty villages are within easy reach of Strasbourg

Access - getting to Strasbourg :
By plane - Nearest airports:  Strasbourg, Basel-Mulhouse
Easyjet and Ryanair flights from London.

By train: direct TGV service from Paris, Lyon and Marseille. For timetables and online tickets, from France or Europe, see Trainline.com .

By road : Strasbourg is 6 hours drive from Calais, 5 hours from Paris, and 2h30 from Frankfurt.


Location :
Region: Alsace
Nearby cities: Colmar, Mulhouse
Strasbourg is in the Rhine valley, on the borders of France and Germany
Urban area Population  450,000
Main sites:  Strasbourg cathedral, the quaint quarter of Petite France, the banks of the river Ill, Strasbourg's famous Christmas market, the covered Pont Vauban barrage, the museum of modern art, boat trips on the river Ill.

Nearby attractions:  Alsace vineyards, Colmar, the Vosges mountains, the castle of Haut Koenigsberg.

About-France.com is an independent user-supported website, and may receive commission from sales made on selected partner websites accessible through affiliate links.

A choice of carefully selected hotels in Strasbourg.

These hotels are conveniently sited in or near the city centre, and all have good write-ups. Click links for details and to book at best rates .

Hotel Régent Petite France Superb hotel located in historic buildings the heart of  old Strasbourg, on an island in the River Ill. By many accounts the best hotel in Strasbourg - certainly the finest location.

Hotel Cour du Corbeau - Four star boutique hotel in a historic traditional Alsatian half-timbered building, in the old part of town a short distance from the river Ill.
Hotel Hannong - Four-star hotel located in an eighteenth century building in old Strasbourg; close to the historic Petite France district and to Place Kleber.
Hotel Sofitel - Four star hotel with parking, located in central Strasbourg, close to the shops, the cathedral and historic districts.
Hotel du Dragon - Boutique hotel in a historic building in old Strasbourg; perfectly located in a quiet street just a few yeard from the river  Ill, and a short walk to the cathedral and other sites.

Alternative places to stay in France

Gites and b&b in France
Independent hotels in France

About-France.com respects your privacy. This website does not collect personal data, and cookies are used solely to gather anonymous audience statistics,and enable essential page functions. To remove this message, click or else request more information.