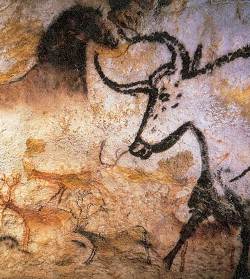 The best prehistoric sites in France

Discover some of the finest prehistoric sites in Europe

► You are here:   France  ›
The best of France  ›
Prehistoric France
About-France.com - the thematic guide to France

Visiting prehistoric sites
No problem with the outdoor sites and museums; but to visit Lascaux IV, the Caverne du Pont d'Arc, and other underground sites, reservation is vital in summer, and recommended in all seasons, on account of strictly limited visitor numbers. Tickets can be booked online on each site's official website, unless otherwise indicated (follow the links when indicated).
Cro-Magnon is a cave in the side of the Vézère valley, in the commune of Les Eyzies de Tayac, in the Dordogne. It is here that in 1868 five ancient skeletons were discovered.  These were soon recognised as the earliest known vestiges of Homo sapiens sapiens, some 200,000 years old, and the direct ancestors of the modern human race.
Humans did not originate in the Vézère valley; other very early remains of homo sapiens sapiens have been discovered in several other parts of the globe, some even older; but the name "Cro-Magnon man" has come to designate the earliest  specimens of the human race, and Les Eyzies is now known as the key prehistoric site in France, and one of the most important in the world.  It is just one of a number of major prehistoric sites in France, dating from the time of the Cro-Magnons and before, to the end of  far more recent neolithic period, which preceded the start of "history" as recorded, some four thousand years ago.
The paragraphs below list best of the major prehistoric sites in France today, taken in order from north to south. 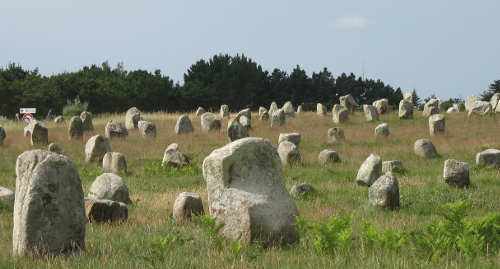 While not  as spectacular as Stonehenge, the neolithic site at Carnac is the most extensive alignment of prehistoric standing stones in Europe, stretching over 4 kilometres (and possibly twice the length in its time). There are some 4,000 standing stones, menhirs and dolmens, dating from around 6,500 years ago.
In the interests of conservation, the site is closed to the public during the peak summer months, and the stones must be admired from designated viewing areas; but outside this period, visitors are free to wander round the site.
The Carnac museum of Prehistory contains one of the largest collections of prehistoric artefacts in Europe.

The Vézère valley, in the department of the Dordogne, is the best known concentration of prehistoric sites in France. It is here that the first skeletons of Cro-Magnon man were found, and also here that the first major site of paleolithic cave paintings was found, in the cave at Lascaux.
Today Les Eyzies is home to the French national museum of prehistory,  with the largest collection of paleolithic artefacts to be found in France.
Nearby, the Lascaux cave offers visitors the opportunity to discover a fabulous collection of prehistoric cave paintings, from the Magdalenian era (20,000 - 15,000 BC). The actual cave, the original, is closed to the public in order to conserve the paintings; but nearby Lascaux IV, opened in 2016, is the latest replica providing visitors with a dramatic tour in a precision-faithful copy of the original cave, copied using advanced 3D laser scanning and casting technologies, and reproducing the original cave with a tolerance of just 1mm.  It is as good, and as realistic, as visiting the original.  ► Official website
The Dordogne also has several other visitable sites.
The Grotte de Rouffignac, 12 km as the crow flies from Lascaux, is another cave with major, though not so spectacular, prehistoric art. Visitors to the Grotte de Rouffignac are taken round in an electric train.
The cave at Font-de-Gaume, near les Eyzies, has cave paintings similar to those at Lascaux. However access to Font de Gaume is very limited; only 52 visitors a day, with no advance reservation. 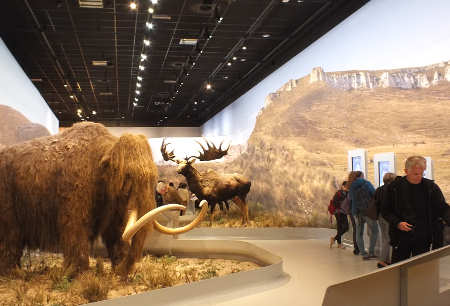 Walk-through recreation of the local paleolithic environment  in the Caverne Pont d'Arc visitor centre
It was back in 1994 that three pot-holers, led by Jean-Marie Chauvet, found their way into a hitherto unknown cavern half-way up the cliffs of the Ardèche gorge. What they discovered was one of the world's most extensive collections of prehistoric cave paintings, remarkably well conserved on account of the dry climate of the Ardèche. Dating from the Aurignacian era (30,000 - 27,000 BC), these paintings are much older than those at Lascaux.
Having learned from the mistakes of opening up other caves to the public in past decades, the authorities promptly forbade public access to the newly-discovered cave, and launched a project to construct a faithful replica on a site nearby. And so in 2015, higher up near the lip of the gorge, the new Caverne du Pont d'Arc was opened to the public.  As with Lascaux, visitors are now conducted on guided tours through a facsimile of the original cavern, complete with perfect reproductions of the most interesting and stunning paintings in the Chauvet cave.
► Official website
As well as the replica of the cavern, the Caverne du Pont d'Arc interpretive centre also includes a walkthrough exhibit of life in paleolithic times, and a museum of prehistoric artefacts. 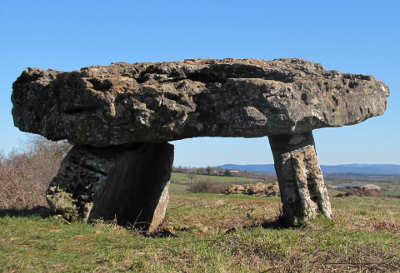 Dolmen de Seveyrac, west of Rodez, one of a number in the area
The limestone plateaux of the Aveyron, were an important centre of human population, and the Aveyron is the department of France with the greatest number of megaliths and dolmens. Hikers around the village of Salles la Source, near Rodez, can discover half a dozen dolmens (burial mounds), some of which have been carefully restored, others of which resemble piles of stone. Some burial mounds have disappeared over the millennia, leaving just a large flat stone standing on two uprights – like icons of prehistoric times.
The most remarkable vestiges of paleolithic life in the Aveyron are the sculpted menhirs, sculpted standing stones, possibly burial stones. To protect them from vandalism and the elements, the 55 sculpted menhirs so far discovered have been taken for safe-keeping to museums, with the largest collection on show in the Fenaille museum in Rodez. 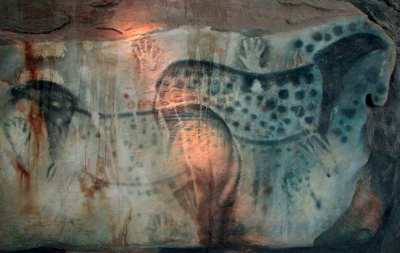 Replica of the dappled horses of Pech Merle, in the Brno museum, Czech republic.
Another unmissable cavern is the Grotte de Pech Merle, near Cahors in the Lot. Pech Merle is an extensive underground system, in which visitors can admire some exceptionally good examples of prehistoric art, painted between 29,000 and 13,000 years ago,  including some of the oldest prehistoric art that can actually still be visited in situ.
Different chambers were discovered in 1922 and 1949. Pech Merle is particularly famed for its "dappled horses" paintings, dating from around 25,000 BC. Much of the art is in the form of line drawings of animals..  Unlike many other cave dwellings, the Pech Merle grotto also has a fine display of stalagmites and stalactites.
Next to the cavern, the Amédée Lemozi museum has a permanent display of prehistoric artefacts from Pech Merle and other locations nearby.
Access to the cavern is limited to no more than 700 visitors a day.our time.     ► Official website 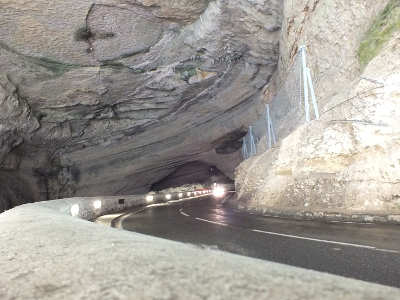 The road through the Maz d'Azil cavern. The prehistoric visitor centre is in the middle of the tunnel
Also in southwest France, almost half way along the Pyrenees, the departments of Ariège and Haute Garonne also offer an impressive number of prehistoric sites.
The most dramatic of these has to be the Mas d'Azil, west of Foix – the world's only drive-thru prehistoric cavern. Honestly ! Like many caverns, the Mas d'Azil cavern was carved out millions of years ago by water etching its way through limestone.  What is spectacular in this case is thet the River Arize flows into the cavern from one valley, and out of it again into the next valley, after meandering 420 metres through a mountain. The vault of the cavern is sufficiently wide and high to have allowed a road to be built through it, nowadays the D911.
It was during the building of the road in the 19th century  that archaeologists discovered the vestiges of prehistoric shelters near the bed of the river, and in lateral tunnels leading off the main vault. Today, in the middle of the mountain, a visitor centre offers guided tours around the prehistoric site. Access is from the car park at the southwestern end of the river tunnel.
To the south of Foix lies another major prehistoric site, the Grotte de Niaux. This cave is worth a visit insofar as it is another of the rare caves in Europe in which visitors can actually view original prehistoric cave paintings, rather than replicas. To prevent damage to the paintings, the number of visitors is strictly controlled, with guided tours taking no more than 25 visitors each hour.  The visit is long: it takes an hour and a half to walk 800 metres into the hill, by torchlight, on an unpaved pathway, and back again: but this is the price to pay to visit one of the finest original sets of prehistoric cave paintings still open to public viewing.     ► Official website

Some other interesting sites

Saint Germain en Laye, near Paris. In the historic château of Saint Germain, visit the French national  museum of archaelology, with rich collections of art and artefacts from prehistoric times

Chilhac, Haute Loire Auvergne. The small Christian Guth paleontological museum,is renowned for the fossilized remains of the mammoths  mastodons and other creatures that once roamed the area nearly 2m years ago. Nearby is the prehistoric site of the Falaise du Blot, occupied about 20,000 years ago. 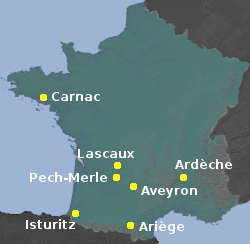 Many hundreds of thousands of years ago, the first humans reached Europe, and in the millennia that followed, human settlements sprang up all over the area of western Europe now known as France.
"Prehistory" was a very long period in time, the population of France was very small, and most vestiges of it have long disappeared. Yet in the past two centuries, archaeologists have uncovered or found traces of many thousands of prehistoric sites. Most are small and - except for the initiated - unrecognisable as historic sites. There are however a number of significant sites, essentially caverns or standing stones, which clearly still bear witness to the earliest human civilisation in France.
This page lists the most interesting and significant of these sites. 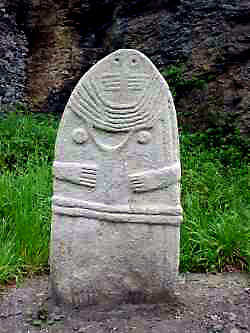 Sculpted prehistoric menhir, known as La Dame de Saint Sernin. From around 3000 BC. Now in the Fenaille museum in Rodez 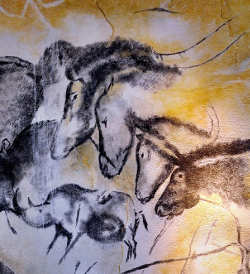