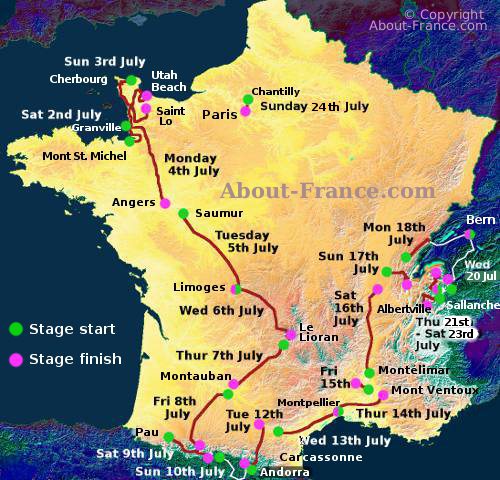 Click stage areas  for regional tourism information
Copyright : If you copy this map on your blog or non-commercial website, you must attribute it to About-France.com
A GUIDE TO THE ROUTE

The 2016 Tour de France will be essentially a tour of central and southern France.
Following two and a half days in Normandy, from 2nd to 4th July, right at the start of the race, riders will then head straight for the south of France.
The first day of the tour takes riders from the magnificent site of Mont Saint Michel, across the Cotentin peninsula, to Utah Beach. Day 2 Sunday 3rd July is a north-south race down the Cotentin, from Cherbourg to the local capital Saint Lo.
On Monday 4th July, riders set off from the seaside resort of Granville, then head south towards the Loire valley, as far as the city of Angers, in the Pays de la Loire region. Stage 4 sets off next morning, Tuesday 5th July, from nearby Saumur for the longest stage of the 2016 Tour, as far as Limoges.
Next day, Stage 5, Wednesday 6th July, is the first of the hilly / mountainous days of the Tour, as riders cross the uplands of the Limousin region to a finish in the Auvergne at an altitude of around 1600 m (around 5000 ft) at the ski resort of Le Lioran, in the Massif Central.
From Le Lioran, Stage 6 on Thursday 7th July takes riders down to the plains of Southwest France, to Montauban, and then next day on across the Midi Pyrenees region to reach the Pyrenees at Lac de Payolle at the end of stage 7.

This is followed by three days in the actual Pyrenees, on the Spanish and French sides of the border. Day 8, Saturday 9th July,  departs from Pau, then takes riders over the classic Pyrenean route of the Col du Tourmalet, which, at 2115 metres above sea level, will be the second-highest point on the 2016 Tour. The highest point on the 2016 Tour de France will be reached on Stage 9, Sunday July 10th, with its finish at the Andorran resort of Arcalis, at a height of 2240 metres.
Riders will enjoy a rest day in Andorra on Monday 11th July, before the final Pyrenean day on Tuesday 12th, which will take them out of the mountains and across to Revel, at the foot of the smaller "Black Mountains".
Stages 11 and 12, Wednesday 13th and Thursday 14th July (a public holiday) will take in two major tourist attractions, a departure on 13th July from the historic walled city of Carcassonne, and an arrival on July 14th at the summit of the Mont Ventoux, one of the emblematic hill climbs that has distinguished many Tours de France over the years. Between the two, on the night of 13th/14th July, the tour will pause in the resolutely modern but historic Languedoc capital city of Montpellier.
Day 13, Friday 15th July, is one of the two individual time trials days, taking riders across the arid garrigue landscape of the Ardï¿½che, past the incredible natural limestone bridge over the river Ardï¿½che, for a finish at la Caverne du Pont d'Arc, site of the replica of the fabulous Grotte Chauvet caves, discovered in the 1990s, with the oldest and largest collection of prehistoric cave paintings in France.
On Saturday 16th July, riders will head due north up the Rhï¿½ne valley, past Lyon, and on to Villars les Dombes in the wetlands of Les Dombes, just northeast of Lyon. Doubtless, the presence of extra traffic related to the Tour de France will add to traffic congestion in the Rhï¿½ne valley on this Saturday, 16th July, which will be one of the busiest holiday traffic days of the year. Even if the riders are heading north on minor roads while the bulk of the holiday traffic is going south on the motorway, extra traffic will be drawn in to watch the event and road closures will cause more headaches. This is probably a day to avoid going near the route of the Tour de France.
Sunday 17th sees riders crossing the hills and valleys of the southern Jura and the Bugey, on a short stage (just 159 km) between Bourg en Bresse and Culoz. Next day, Monday 18th July, the Tour spends the day in the Jura mountains of Franche Comtï¿½ before crossing into Switzerland for a race across the Swiss plains to a finish at Bern.
Here in Switzerland, riders will enjoy their second rest day, before setting out again on a challenging Swiss stage on Wednesday 20th July  across the Bernese Oberland, via Chï¿½teau d'Oex and Martigny before a climb to the finish at an altitude of 1960 metres, over 6000 ft, at Finhaut .
Next day starts a few kilometres away, back in the French Alps, at Sallanche. Thursday 22nd July is the second day of time trials, taking riders over a hilly route from Sallanches to Megï¿½ve.
Then follow two days of mountain climbing in the Savoy Alps, on Friday 22nd and Saturday 23rd July, taking riders on mountainous routes from Albertville to Saint Gervais, at the foot of Mont Blanc, and next day from Megï¿½ve to Morzine - classic Tour de France mountain stages.
The final stage of the Tour, on Sunday 23rd July, will take riders on a short stage from the smart town of Chantilly, in southern Picardy, to the traditional finish on the Champs Elysï¿½es in Paris.


A brief introduction to the regions of France
Website and all pages   Copyright About-France.com 2003 - 2016 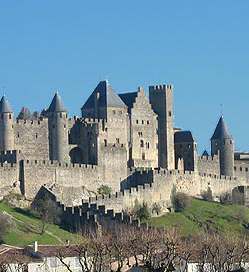 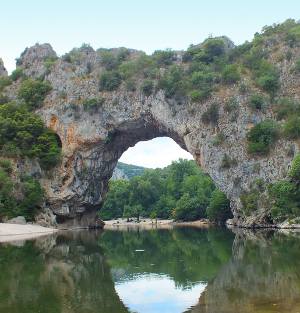