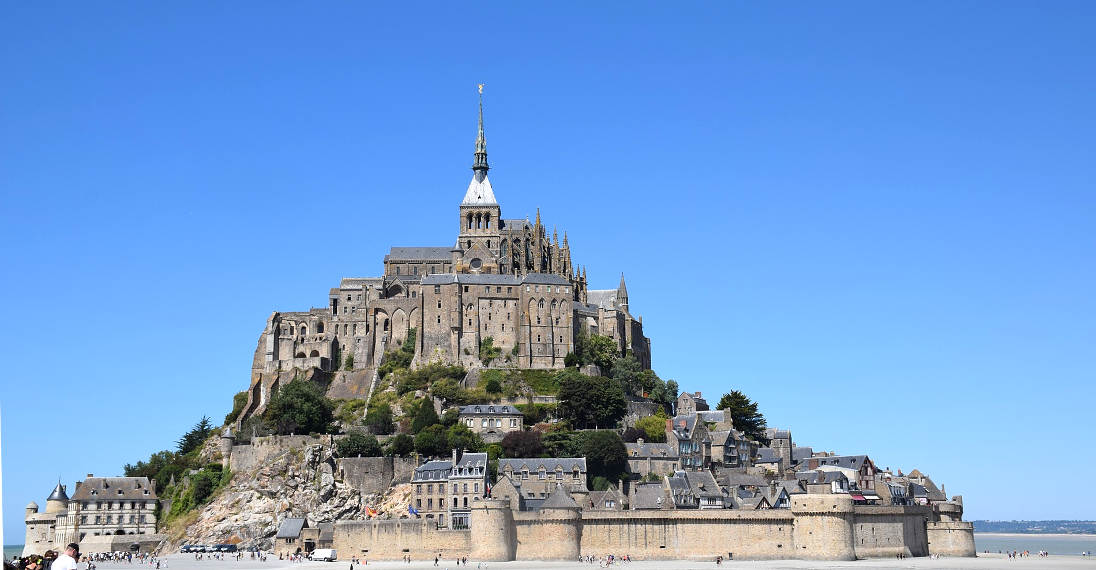 COVID info: as of March 2021 France is still closed for tourism. It is expected that things will start opening up again as from May and that a new form of post-Covid "normal" may be reached by August or September.  While accommodation providers are taking advance bookings, early booking for tourist attractions is reopening more slowly.

Accommodation at Mont Saint Michel or nearby

Bed and Breakfast:
A choice of selected
B&Bs near Mont Saint Michel

Normandy in a nutshell
Going further...


Apart from monuments in and around Paris, Mont Saint Michel is the most visited tourist attraction in France.  And it is not difficult to see why.
This remarkable medieval walled city, crowned by its great gothic abbey, is built on a small granite outcrop standing all by itself in the flats of the estuary of the  river Couesnon, in an area now known as Mont Saint Michel bay. Mont Saint Michel was one of the first monuments to be classed as a UNESCO world heritage site, as far back as 1979.

Le Mont Saint Michel is not just a church on a rock; it is a whole medieval city, one of the few places in France to have preserved intact its medieval walls and defences. The city, though small, has to this day inhabitants - not many full time inhabitants - and a mayor, and in addition to its religious monuments, has old houses, narrow streets, hotels, restaurants and shops, all catering for the over-a-million tourists who come to visit this magnificent site each year.
The first Christian oratory was founded on the island as far back as 708 AD, by Saint Aubert of Avranches, and  naturally it was dedicated to Saint Michael, the patron saint of sailors. In those days, and for the ensuing centuries, the island of Saint Michel was a proper island out in the bay, surrounded by water for much of the time and by sand at low tide. Access was by boat or across the sand when possible.
However, over the course of the centuries, as the bay gradually silted up, the shores got closer and closer to the mount. The process was accelerated by successful attempts over the years to reclaim some of the flat fertile wetlands at the edge of the bay, for use as agricultural land. Mont Saint Michel bay is thus now several square miles smaller than it was in the Middle ages, when the first Benedictine monastery was set up on the island.
During the Middle Ages, le Mont Saint Michel was an important and iconic location in this north western part of Europe . Its monastery flourished as one of the great places of learning in the twelfth century, before becoming a place of symbolic importance in the struggles that convulsed western Europe in the late medieval period, pitting Normans against Bretons, French against Normans, and French against English.
As part of Normandy, the Mount belonged to the successors of William the Conqueror, the Duke of Normandy who had conquered England in 1066 and set up his court there. Normandy, and with it the Mount, had thus become an English possession, just as the nearby Channel Islands (known in French as the Anglo-Norman isles) remain to this day.
The town was captured and burned down by the French in 1204, who then proceeded to rebuild it. Later, during the Hundred Years' War, it was besieged by the English, but not recaptured.
The Abbey that most visitors climb up to see is a fine example of medieval architecture, different parts dating from different periods as is common in old cathedrals and abbeys, particularly those that have experienced wars and natural disasters. The impressive gothic choir dates from the period following the departure of the English. However, like much of the building it was seriously and extensively renovated in the nineteenth century following a visit by France's great gothic revivalist architect Viollet Leduc. Thus it was that in 1896, the Abbey became crowned by its landmark spire, which is not medieval at all, but the work of the architect Edouard Corroyer.
By that time, the Mount had already been classed as a historic monument, and was beginning to attract tourists, for whose benefit an insumbersible causeway had been built in 1880. But the effect of the causeway and other land management schemes - as well as bringing increasing numbers of tourists to the mount - was to considerably accelerate the silting up of the bay, to the point at which there was a serious risk that the Mount would before long be landlocked if nothing was done.
Since the nineteen-eighties, measures have thus been undertaken to dredge the bay and put the process of silting into reverse, in order to return the Mont Saint Michel to what it once was,  a small granite island in the bay.

Tides: the Baie de Mont Saint Michel is one of the most steeply tidal points in Europe, with a tidal variation of almost 50 ft or 15 metres. The highest tides (spring tides) occur in the day or two following a new moon and a full moon, and most particularly at the spring and autumn equinoxes. On these occasions, the sea can completely surround the mount, except for the insubmersible causeway.  During periods of neap tides (when the tidal variation is least) the Mount is not surrounded by water at all, even at high tide. 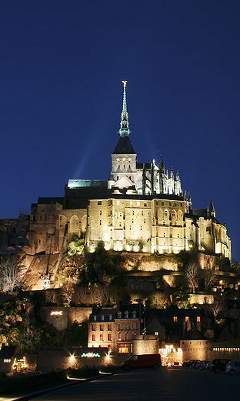 Map:
Mont Saint Michel is marked by the red spot 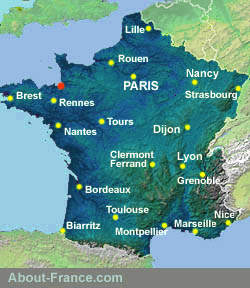 Discover the best of France on About-France.com

Photo top of page by RGY23

About-France.com respects your privacy and does not collect any data from users. We use cookies solely for audience statistics and to enable social media and a few advertisements. To remove this message, click   or otherwise click for further details