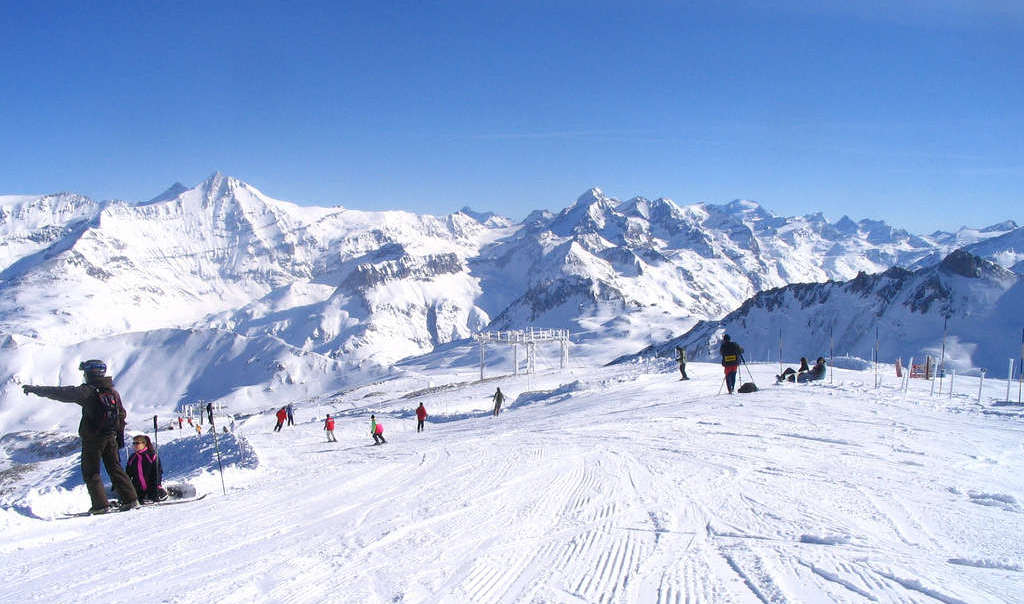 Winter sports and skiing in France

► You are here:   France  ►
The best of France ► Skiing in the French Alps
About-France.com - the connoisseur's guide to France

Winter sports and Skiing in France: where to go and when to go ?

Skiing in France: where to go?


COVID 19  information. With Covid lockdown restrictions in place,French ski resorts remain theoretically closed, and are unlikely to open for business this season.   In actual fact, the resorts themselves are not closed. Chalets and hotels can be open, but with no bars and no restaurants, other than carry-outs, and no ski-lifts, French ski resorts offer an unusually quiet type of getaway for mountain enthusiasts. Nordic / cross-country skiing and snowshoeing are authorised, as these activities do not pack people together in confined spaces and so are unlikely to spread the virus.
Alpine ski resorts are expecting to welcome about  1/3 of the normal number of French visitors in February, but far fewer international visitors.

When the days get short, and the temperature falls, the mountains of France are blanketed in snow.
But where are the best places to go skiing in France ?   And when is the best time to go ?
Of course, it rather depends what you are looking for in a ski resort - crowds, company, thrills, adrenalin rushes, a break with the kids, a skiing holiday without children on the slopes.... or just peace and tranquility, gently cruising down a mountainside, and enjoying the quiet of a winter wonderland.....

Skiing in the French Alps - the main resorts

See Europe weather forecast maps on Copernicus
When it comes to skiing, France is one of Europe's top destinations. It is on the French-Italian border that the Alps, Europe's greatest mountain range, reach their peak, in the eternal snows at the summit of Mont Blanc, 4,810 m (15,781 ft) above sea level.
The French Alps offer the broadest range of skiing opportunities anywhere in Europe (see below), but they are not the only mountain range in France with skiing facilities, and in some cases it may be interesting to check out the opportunities available in the Vosges, the Jura, the Massif Central and the Pyrenees (see Other French ski regions), all of which have fully equipped downhill and cross-country ski resorts. 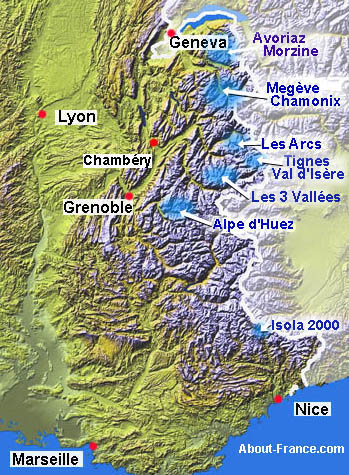 It is the Alps that offer the broadest range of resorts, and - on account of the altitude - those where the snow conditions are most reliable. Here are the main skiing areas in the French Alps.
Les Portes du Soleil, (Avoriaz - Morzine) the northernmost area, takes in a dozen resorts, including Avoriaz - reputedly the capital of snowboarding - and Morzine, a long-established resort, at an altitude of 1000m, with plenty of facilities for beginners. The Morzine ski pass includes the runs at Les Gets, a resort that includes ski-runs for children only. The ski resort at Praz-de-Lys / Sommand is popular for the large number of easy runs. La Chapelle d'Abondance is reputed to be a good family ski resort.

Further south is the Chamonix - Megève sector; Chamonix, in the Savoy Alps, lying at the foot of Mont Blanc, was the original French ski resort, and for many years has been very popular with skiers from all over Europe; it is also very expensive. Today, the area around Chamonix and Megève offers the fifth largest skiing area in France. The resort at Combloux, near Megève, is reputed to have good opportunities for beginners. Les Carroz, near Flaine, is a popular resort for families with children.

Tignes / Val d'Isère is a high mountain area, with some 300 km of pistes, many of them over 2,500 metres altitude. This area offers a good number of pistes for beginners and relatively inexperienced skiers, as well as pistes for the more intrepid. Val d'Isère is reputedly the most expensive ski resort in Europe. With the highest pistes at over 3000 metres, this is an area where some skiing is possible almost throughout the year.

The ski area of Les Trois Vallées (Les 3 Vallées), including the resorts of Courchevel, Val Thorens and Les Menuires, is the world's largest ski area accessible with a single pass. With 183 ski lifts and 335 downhill pistes, the area gives skiers access to over 600 km. of slopes - more than enough for even the most demanding of skiers. With almost 2000 snow cannons, the area is also able to guarantee that a fair number of pistes will be open even if the snow does not come in abundance. Courchevel, with its collection of top hotels and Michelin starred restaurants, is reputed as the most up-market ski resort in the French Alps, on a par with Zermatt and St. Moritz.
L'Alpe d'Huez: one of the largest ski resorts in France , l'Alpe d'Huez offers a wide range of facilities, including plenty of slopes for beginners, and also opportunities for off-piste sking. the resort is the closest major ski area to the city of Grenoble, and therefore attracts plenty of day trippers as well as staying guests. Further west, in the Vercors area, the resort of Villard de Lans, southwest of Grenoble, is reputed as the most environment-friendly ski resort in the French Alps, and also a good family resort.

With 120 km of pistes, the southern Alpine resort of Isola 2000 is reputation of being both one of the sunniest ski resorts in France, one of the coldest, and also one of those that gets most snow. Damp winter winds off the Mediterranean can dump large quantities of snow on the high peaks of the southern Alps, while the northern Alps get little or nothing. The resort is a classic 1970s development, lying at an average altitude of 2000 metres - rising to 2,600 metres. This resort is just an hour and a half by car from the Riviera, and is therefore popular with people living in Nice and the surrounding area.

There are plenty of other ski areas in the French Alps, but mostly smaller and for this reason often calmer, sometimes cheaper, and more family-oriented. Resorts that are based on long-existing small towns, such as La Clusaz, Aussois or Serre-Chevalier, near Briançon, offer an authentic Alpine experience.

Don't forget that insurance is vital.

Flying to the Alps:

The main airports for the French Alps ski resorts  are Lyon, Chambéry Grenoble and Geneva. For airlines serving these destinations, see the About-France.com Fly to France page. Before booking, beware of the possible extra charge levied for skiing gear. One airline that does not charge extra for skiing gear is Swiss International.

Driving to the Alps

Road travel:  The big problem with Alpine skiing areas is knowing how to avoid the crowds . A great international reputation means that the main Alpine ski resorts attract millions of skiers each winter, from all over France, and all over Europe. Avoiding peak weeks can mean far less time spent waiting in queues on the slopes, or waiting to be served in the restaurant – not to mention better deals.

When to ski in France ?

Visitors from North America
Ever thought of Skiing in Quebec ?

For obvious reasons, it is quite impossible to predict the best week in the year for skiing - anywhere in France. On the other hand, it is possible to suggest the times to avoid if you want to enjoy more time on the slopes, and less time standing in queues. The periods to avoid are basically the Christmas and New Year weeks, and February, when millions of people across France and Europe are enjoying half-term breaks. See table below.
Consequently, that leaves two periods when conditions are less crowded, and often less expensive:
Between about 5th January and early February: this is a relatively calm period on the ski slopes; the disadvantage is that the days are still short, and the weather can be at its coldest.
The month of March: usually, this is the least crowded of the skiing months, except when Easter is early, and the Easter holiday period is still a good time for skiing. The disadvantage is that ski resorts at lower altitudes may be losing their snow, at least on the lower slopes. The advantage is that days are longer, and warmer.


Click here for holiday dates by zone
More information on weather in the French Alps
Generally less well-known, the other French mountain ranges tend to attract a far less international clientele, and for this reason their slopes are often not just less crowded, but relatively quiet outside the French school holiday periods - except at weekends.


More skiing information:
Check out here for  skiing in Austria

About-France.com does not collect any personal data. Cookies are used in order to ensure a fully functional website. If you are OK with this, click otherwise request more details