The greatest châteaux of the Loire

The Loire châteaux and their history


COVID info:  France is fully open for tourism as of spring 2022.  Visitors no longer need to show a valid Covid vaccination pass  to gain entry to sites.  The wearing of facemasks remains obligatory on public transport. Visitors entering France still need to be in possession of a certificate of vaccination or proof of a recent negative test or recovery from a recent covid infection. For up-to-date details on remaining covid restrictions in France,  see Covid passes.
Click on markers to show the name and a thumbnail image of any chateau 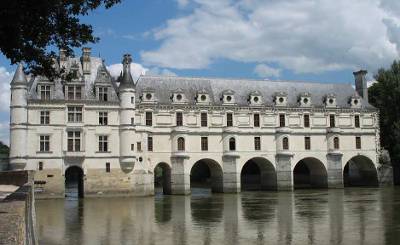 The Châteaux of the Loire in history

Find hotels in the Loire valley

Paris
Other areas
About-France.com is partnered with Europe's leading hotel booking portal, Booking.com, to bring you the best online prices
At the end of the Middle Ages, France changed. The Medieval period had been a time of wars and conflicts when France was rather smaller than it is today. Areas of France had been fought over, notably between the French and the English (who were still French at the time), the French and the Burgundians, and other powers to the south and the east. Medieval castles needed to be fortresses, defensive positions in strategic locations, or bastions built to affirm the power of a local duke or baron. The massive royal fortress at Angers is a fine example of this.
In the year 1475, the Hundred Years' War with England came officially to an end. Two years later, on the death of Duke Charles the Bold at the battle of Nancy, King Louis XI took over Burgundy and Picardy, and reestablished the power of the King of France over most of the area we know of today as France. An era of relative peace was ushered in. 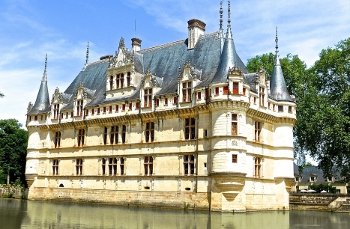 Château at Azay le Rideau   (► tickets )
This coincided with the arrival in France of the Renaissance, an artistic and cultural movement that had begun in Italy a hundred years before; and as the ideas of medieval and feudal society died out, dukes, princes and kings began to convert old castles, and build new ones, that were not designed for war, but designed for peace. The 16th century châteaux, for which the Loire is justly famous, were built as Renaissance palaces where their owners could enjoy the good life and partake in their favourite sports, notably hunting in the forests of the Loire valley.
The first of the Renaissance Loire Chateaux is said to be the Ducal Palace at Nevers (Burgundy), built between 1470 and 1490 to replace an earlier fortified castle; but the building of the greatest Loire chateaux took place between 1490 and 1550. The most intense period of activity was during the 20 years between 1514 and 1534;  the Chateau de Chenonceau was started in 1514, a year before King François 1 began renovating the château de Blois. The château at Azay-le-Rideau was started in 1518, the château de Chambord in the following year 1519, and the château de Valançay the year after. The château de Villandry was begun 12 years after that.  More châteaux were built, or rebuilt, over the ensuing century, giving the Loire valley area an exceptional heritage of Renaissance palaces, recognised today as a UNESCO world heritage site.

Photo top of page and below : Chambord 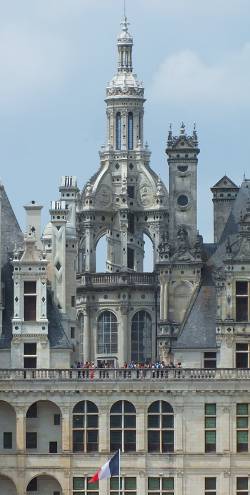 
Other countries
Greatest castles in Spain 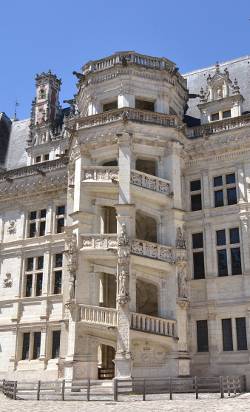 Renaissance stairway in the Chateau at Blois
Texts and photos © copyright About-France.com except where otherwise indicated.
Photo Villandry: Creative commons photo by Adalpos