The Great War in France

► You are here:   France  ›   Tourism  ›  The First World War
About-France.com - the connoisseur's guide to France

Today, the only sounds that disturb the fields and forests of much of northeast France are those of farm machinery and passing road traffic, or in more bucolic locations, birdsong, the bells of grazing cattle and other traditional rural sounds.
If you were to stand - for example - in the depth of the countryside, just a kilometre east of the church of the small village of Romagne sous Montfaucon, in the Meuse department, you could feel the silence. There is no noise here, no sounds but the wind in the trees, sometimes raindrops, birdsong, and the occasional voice of a passer by. And from time to time the sound of lawn-mowers or the call of a bugle.
Then turn your mind back  just over a century, to 1917, when the only silence here was the silence of the dead. Then look at the photo above. You are here. 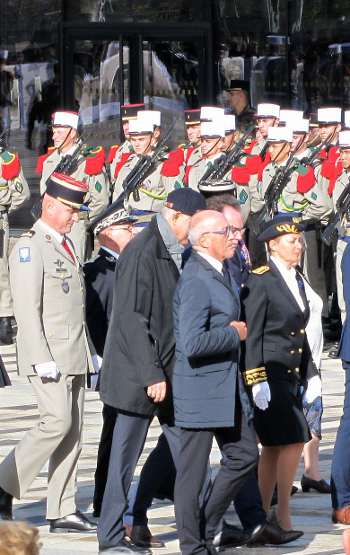 Armistice ceremonies take place in towns and villages all over France on the 11th November
Today, as the language of aggression and hostility towards others has found a new popularity among nationalistic leaders in many parts of the world, it is sobering to recall the horrors of the war  of which a large part was played out in the filds and woodlands of northern France a hundred years ago.
From 2014 to 2018, France - along with much of the world -  reflected back on the horrors of the First World War, the "Great War" which many thought, once it ended, would mark an end to all wars. And France  remembered with greater grief than most other countries. It is an often overlooked fact that French military casualties in the First World War were greater than those of any other combating nation, except Russia; and France took the highest number of casualties on the Western Front; because to a large extent, France was the theatre of war in which the battles of the Western Front were fought out.
Each country remembers its own dead in war, often without so much thought for the dead of the other nations, allies or enemies, who had their own losses too. In France they will remember their own, the "poilus" who went to their deaths; but they will also remember the others, since they cannot forget them. It was in France that so many died and so many lie to this day. British, Americans, Australians, New-Zealanders, Canadians, South Africans,  Americans.... but also Germans and Austrians: and young men from many other countries. Over nine million servicemen lost their lives in the First World War - about half of them on the Western Front.
The expression "battlefield tourism" sounds trite in the context; but visiting the many sites, monuments and cemeteries of the First World War in France is a sobering experience, for both young and old. 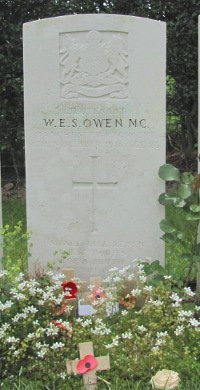 Grave of Wilfrid Owen, Ors
No one will ever be able to count the actual number of men who fell on the Western Front, in the fields of Flanders and Northeast France, during the Great War; but the number is horrendous. It is estimated that there were upwards of 750,000 British and Commonwealth casualties during the years of the conflict; France recorded almost 1.4 million military deaths, most of these on the Western Front, and  probably over a million young German and Austrian soldiers perished fighting in France or Belgium. And these figures do not include the civilian deaths due directly or indirectly to the effects of war.
Most of the fighting took place on French soil; great historic events like the Battle of the Somme, in France, or the battle of Passchendaele, in Belgium, each claimed hundreds of thousands of lives. But the war itself raged on for four years, over hundreds of square miles of land, and countless small batttles, skirmishes, and bouts of trench warfare. Consequently, the French areas of Picardy, French Flanders, and the Ardennes are are home to hundreds of small First World War cemeteries, some very small. Visitors may come across them by the wayside, amidst the fields, or in small villages. The great wartime poet Wilfrid Owen lies buried not in a large military cemetery, but in a small war-graves area in the local village cemetery at  Ors, near where he died during the final weeks of the conflict. His grave bears the simple inscription Lieutenant W.E.S. Owen, MC.
The map above shows a selection of the largest military cemeteries, colour-coded by nation. It also shows the cemetery at Ors. The photo at the top of this page is illustrative of the scale of the larger cemeteries. It was taken in the middle of the huge American  Meuse-Argonne cemetery, resting place of over 14,000 American soldiers who fought in the final and decisive battles of the war, in the Ardennes and Lorraine area.
At Vimy Ridge, the great Canadian memorial and war cemetery, some of the trenches and tunnels have been preserved, and can be visited with a guide.
For the French, the great resting place of the dead of the First World War is the ossuary at Duaumont, just outside Verdun. Here are buried the bones of over 100,000 unknown soldiers - in a large and sobre mausoleum on a hilltop among the forests of the Ardennes. Close by, an eery glade in the forest marks the spot where, before it was razed to the ground during the conflict, stood the small village of Duaumont.  It is one of several such "ghost villages" in the area, places to which the inhabitants never returned.

The map above shows (green markers) some of the main museums and monuments. While the region has many small museums and interpretive centres devoted to events of the Great War, those shown on the map provide a varied and interesting view of the conflict. At Compiègne, near Paris, the site of the Armistice is preserved as a memorial centre. The centre includes an exact replica of the railway carriage in which the original Armistice was signed. The original railway carriage was removed by the Nazis during the second world war, and destroyed.
Also close to Paris, and easy to visit on a day's excursion from the capital, the Great War Museum at Meaux has one of the largest collections of WW1 memorabilia and artefacts. This modern museum was opened in 2011, and as well as its permanent collection it has special exhibitions and an educational area.
In the town of Péronne, in the Somme, there is a modern "Historial" of the great war, a museum established within the walls of the town's impressive thirteenth century fortress.  Not far away, in the town of Albert,  the "Somme 1916" museum is housed in a long underground tunnel built as a safe haven for citizens before the start of the second world war.
The "Petit train de la haute Somme", near Bray sur Somme, is an operating narrow-gauge steam railway, four miles of track that are all that remains of the many miles that were set up during the Great War to bring supplies and men to the Front, and take out the wounded and they dead. The railway uses historic stock and also has a museum.
The Caverne du Dragon, or Dragon's cave, is a remarkable underground museum, created in a network of ancient caves carved into the limestone hillside near Corbeny. German troops occupied the caves until they were partly forced out by the French - after which both sides occupied different parts of the underground system.

The most central locations in which to stay are around the towns of Arras and Albert.

Many tour operators run Battlefield tours : these can either be arranged locally, from Tourist Offices in the main areas, or else purchased as fully inclusive package tours, including all travel arrangements.


From Paris:  To join a day-excursion battlefield tour from Paris, check out Paris City Vision's Somme tours or other battlefield tours by coach or minibus.  Private tours can be organised.

Inclusive package tours:
For visitors from the United Kingdom, there are a number of 5 or 6-day inclusive tours, with travel from the London,  organised by "Great Rail Tours".  Lille - in the heart of northern France - is just 1hr 20 minutes from London by Eurostar.

Local tours:
An example of locally organised battlefield tours is the "Poppy country tour" run by the Tourist Office at Albert; this 2½ hour minibus tour is run in summer with English-speaking or French-speaking guides.
Info and reservations from the Tourist office E-mail : officedetourisme "at" paysducoquelicot.com .

Hotels in Flanders and northeast France