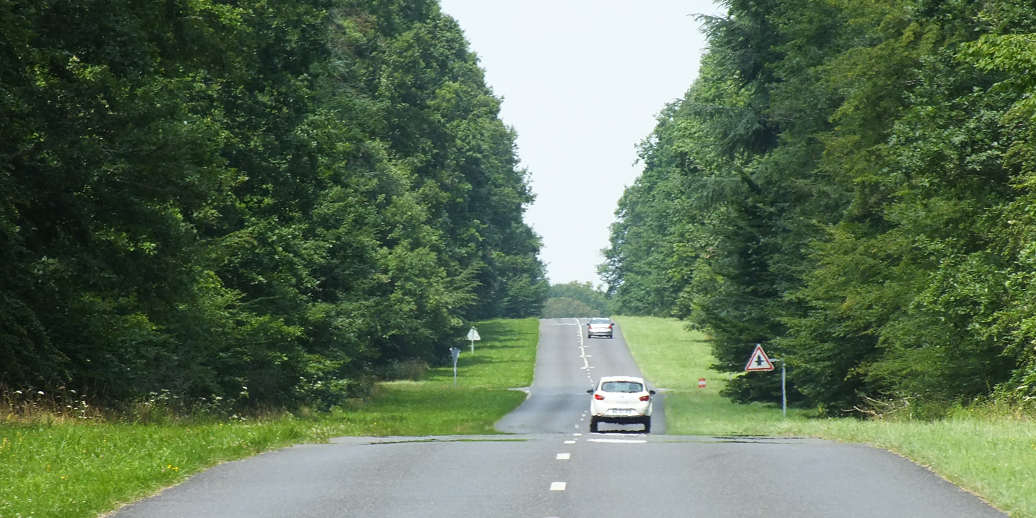 Part 1
From Rouen to the Centre of France on byways

► You are here:   France  ›
Driving   ›
On byways through France 1
About-France.com - the thematic guide to France
In part 1 of this guide to Byroads through France, we take you on small hassle-free roads from Rouen, in Normandy, as far as Saint Amand Montrond, the small town that is located closest to the geographic centre of  continental France.
► Start from Rouen

This route starts at Rouen, a historic city on the river Seine, and home to one of France's greatest medieval cathedrals. Rouen (population 111,000) is the only big city on the whole route. Rouen can be easily reached from the main Channel ports of Calais, Dieppe, Le Havre, Caen and Cherbourg (See Ferries to France).


Route guide part 1:
from Rouen to the centre of France


★★★ Rouen is an attractive riverside port city, boasting one of the finest medieval cathedrals in France. The old city around the cathedral is a maze of narrow streets with many half-timbered houses. Among the other great sights in the old city are the Gros Horlorge, a 14th century astronomical clock on the facade of a Renaissance arch, and the Renaissance Law Courts (Palais de justice), formerly the Norman parliament building.

Leave Rouen following signs for Elbeuf . One way or another, you should get onto the D 938 or the D7 (from exit 21 on the A13 motorway), both of which lead to Elbeuf. Leave Elbeuf on the D840 following signs for Le Neubourg. You will now follow the D840 all the way to Verneuil sur Arve. The road is mostly straight. Before Verneuil, you will drive through, or skirt round, two small towns:  Conches en Ouche ★ is an attractive small town with a fine flamboyant gothic church, the remains of a medieval keep, and other historic sites. Further on, Breteuil is a small town with a 12th century church and some typical Norman half-timbered houses.

Verneuil sur Arve ★★ is listed by Michelin as one of the 100 small places in france that are "worth a detour". Among its sights, the small town has a fine gothic church with an impressive flamboyant tower, and several noteworthy Renaissance town houses.
Leave Verneuil following signs for Brezolles and Chartres. The D839 becomes the D939 just outside town, when you leave Normandy and move on into the Centre-Val de Loire region. You'll follow the D939 all the way to Chartres, which will probably be your next stopping point.
Chartres ★★★ is a small city of 38,000 inhabitants, and the site of one of the finest medieval gothic cathedrals in France, and one of the most visited on account of its magnificent medieval stained-glass windows. There is an underground carpark close to the cathedral, or street parking further away.
South of Chartres you'll be crossing the wide almost flat expanses of the Beauce, the historic breadbasket of France; you'll cross the Beauce on quite small roads, through little villages and large expanses of farmland, and you'll need to follow the route carefully.
Leave Chartres  following signs for Blois and Tours on the old N10 road, now the D910. Pass through the village of Thivars, then at a roundabout just past the entrance to the A11 motorway, turn left on the D131 for the village of Dammarie.
In Dammarie, the D131 comes to an end, beside a church. Turn right onto the D935. At the end of the village of Dammarie, the D935 swings left, but you don't. Take the smaller road that carries straight on, signposted Fresnay le Chateau. You're now on the D127, an old Roman road,  which you'll follow in an almost straignt line until it meets the D27, in the middle of nowhere. Turn left following Patay. But don't go to Patay;  two kilometres later, fork right where the D127 resumes, following Varize.

At Varize, turn right and follow signs for Chateaudun on the D927.  After about 7 km, beside the village of Etauville, turn left onto the D131 signposted Etauville and Lutz en Domois. Follow the D131 on past Lutz. Cross the D955, then continue on the D131 to Thiville and as far as the intersection with the D925. Turn left onto the D925, which will take you as far as the next Michelin "worth a detour" small town, Beaugency, on the banks of the Loire.
★★ Beaugency is a small town that is well worth stopping at. The old town with its narrow streets is dominated by a massive 11th century keep, has lots more historic buildings too. Below the town, admire the Loire, the biggest river in France, and its ancient stone bridge, parts of which date back to the Middle Ages

Leave Beaugency by crossing the fine stone bridge over the Loire. At the end of the bridge, fork right following Chambord ★★★ . Now just keep following the signs for Chambord until you reach this the most famous of the Renaissance Châteaux of the Loire. Until you reach Salbris, you'll be driving through the historic royal forest area of the Sologne.
After stopping to admire or to visit the great château, built for King François 1st, leave Chambord on the D33 following signs for Bracieux ★ an attractive large village with a 16th century covered market,  and Cheverny ★★★. At Cheverny you can visit another of the fine Loire chateaux.
Leave Cheverny on the D765 following Romorantin- Lanthenay. At Mur de Sologne, turn left in the middle of the village onto the D122, signposted Velleins. The D122 will take you through the heart of the Sologne forest ★★,  through Velleins and Millançay, as far as Marcilly en Gault, where you pick up the D121 which will take you to Salbris.
At Salbris, if you've had enough of small roads, you can pick up the A71 or A20 motorways to head on down to southern France. Otherwise, in Salbris turn south onto the D2020, then left at the roundabout to take the D944, which you follow as far as Allogny.  Here you turn right for Mehun sur Yèvre ★★, another of Michelin's "worth a détour" small towns, with the remains of a great medieval fortress, and a fine medieval city gate.  From Mehun it is just 18 km to Bourges.

Where to stay About-France.com has selected a range of hotels along the route. Click markers to book online with our partner Booking.com. There are also campsites and motorhome overnighting areas in many of the small towns along the way

★★★ Bourges . Bourges is a small county town with a fine historic centre. It boasts the third and last of the great French medieval cathedrals on this trip, and the one that gets the least visitors. It too has remarkable medieval stained glass windows. There is also the Palais Jacques Coeur, a grand 15th century Renaissance palace built by the finance minister of King Charles VII.
Leave Bourges in a southeast direction on the D2076, then after the village of Saint Just fork right onto the D953 for Dun sur Auron. At the entrance to Dun, fork right where it's marked Saint Amand Montrond, then in the village turn right onto the D10, following Meillant and Saint Amand. After crossing the river bridge, turn left at the roundabout, still following the D10. About 18 km later you will reach Meillant where you may like to visit the Chateau de Meillant ★★ one of the finest late medieval - early Renaissance castles in France, a castle far less visited than the Loire châteaux.
A few kilometres later, you drop down into the valley of the Cher, and reach Saint Amand Montrond ★, the town that claims to be at the geographic centre of France.  Saint Amand is a pretty small town, with a romanesque church, the banks of the Canal du Berry, and a number of historic buildings.
Three kilometres west of Saint Amand, the Abbaye de Noirlac ★★ , is one of the largest and best preserved former Cistercian monasteries in Europe, with an abbey church and cloisters dating from the 11th to 16th centuries.


Copyright text and photos © About-France.com 2008 - 2019 except where otherwise stated.