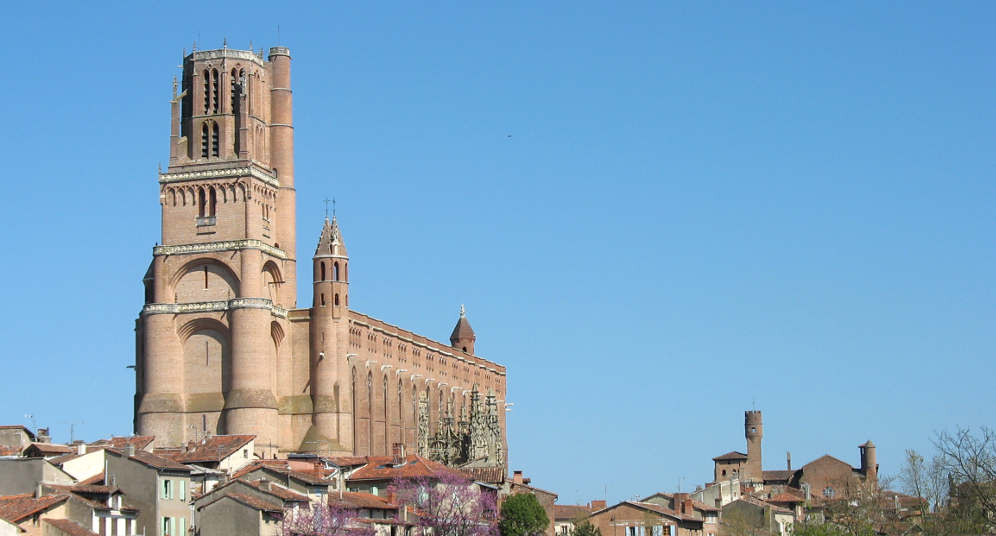 ► You are here:   France  ›
Heritage cities  ›
Albi
About-France.com - the connoisseur's guide to France

Discover Albi - things to see and do 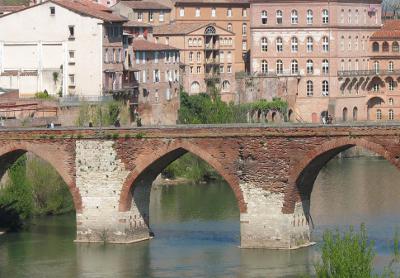 Medieval bridge over the Tarn at Albi
While it is not exactly undiscovered, Albi is one of those French provincial cities that has only recently come into its own as a tourist destination. The change in the city's fate came in 2009, when its episcopal area - comprising the cathedral and the Palais de la Berbie, the bishop's palace - was classed as a UNESCO world heritage site.
A small city standing on the banks of the river Tarn, Albi has a history rooted in the religious conflicts of the Middle Ages.  The "Albigensian Crusade" (1209-1229) was the only medieval crusade conducted not against Islam, but against Christians, specifically against the Cathars, who practiced a form of proto-Protestantism, refusing the authority of the Catholic church.
In the 12th century, most of the land of "Languedoc" was Cathar country, and the city of Albi stood at the geographical centre of the Languedoc of the time.
Combating Cathar heresy was a good pretext for the Albigensian Crusade, whose real objective was as much about bringing the southwest of France under the control of the French kings, as it was about fighting heretics.  But even after the victory of the French, the southwest of France remained volatile, and the Catholic powers were wary of insurrection.  Albi cathedral, the building of which started half a century after the end of the conflict, was thus  built as a massive fortress, designed to stand as a symbol of episcopal power and a defensive position for use in the event of attack. 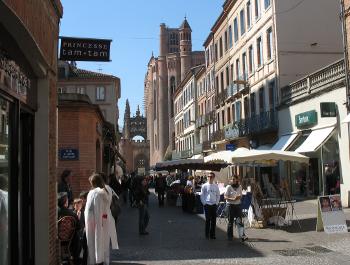 In the streets of old Albi
Albi, capital of the Tarn department,  is arguably the most interesting small city in the Midi-Pyrenees region. St. Cecilia's cathedral has always been a remarkable and unique monument, being both fortified and built of brick. On the outside, it looks like some gargantuan array of medieval grain silos; inside, it is all delicate gothic tracery in stone and wood, one of the finest late gothic buildings in France. Of particular interest are the massive murals of the Last judgement, that decorate the whole of the cathedral's western wall.
It is the only large gothic cathedral built out of brick rather than stone - brick being the trditional building material in the area of Albi as in nearby Toulouse and much of the Tarn and Garonne plains.

Next to the cathedral stands the similarly massive and fortified Bishop's palace, part of which now houses the magnificent 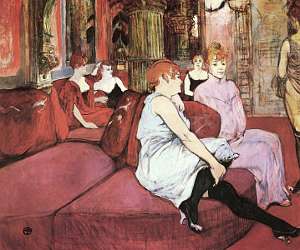 Beside the west end of the cathedral, a pedestrian piazza takes you to a vantage point overlooking the river Tarn below, and the old bishop's gardens. Upstream from the cathedral can be seen the Old Bridge, a thousand years old, and still in service today. The bridge can be reached on foot by taking a short walk down the street in front of the entrance to the Toulouse Lautrec museum.
The old city of Albi, with its narrow pedestrian streets and historic buildings, is clustered round the cathedral. Of particular interest is the XIIth - XIIIth  collegial church of Saint Salvi, with its cloisters.

For visitors staying in or around Albi, and wanting to discover the local area, three places stand out.
Just west of Albi, Gaillac is the centre of a well known vineyard area - AOC Gaillac. As well as vineyards that can be visited, and wine tasting (check local tourist offices for details), the area aslo has some interesting fortified villages, notably Puycelsi and Castelnau de Montmiral.
Northwest of Albi lies Cordes sur Ciel, an incredible small town, perched on a hill above two valleys: Cordes was built up in the XIVth and XVth centuries, and to this day has conserved a remarkable collection of medieval town houses and streets - one of the best in France. Saturday is market day.  Click here for a free audio guide to Cordes.
Finally, on a completely different note, Carmaux, just north of Albi, has an interesting mining museum. Carmaux was once a coal-mining town; the last pits closed in the 1980s. In the mining museum, visitors take a 350 metre underground tour in a reconstructed coal mine. For those interested in industrial archaeology or engineering, fifteen miles to the north of Carmaux, on the road to Rodez, another very attractive small city, is one of the finest 19th century railway viaducts in France, the Viaduc du Viaur, which carries the railway line from Albi to Rodez.

Until recently, Albi suffered from its location which is rather aside from the main tourist routes in France: but within the last ten years, the motorway link with Toulouse has been completed, and the link via Rodez to the A75 is being upgraded to motorway standard. For now however, almost half the section between the A75 and Albi is still single carriageway.

Access by rail: Albi is on a branch line between Toulouse and Rodez.  It can be reached by train from Paris via TGV to Toulouse, then connecting to a local train.

Access by air:  Toulouse Blagnac airport is a little over an hour from Albi. Rodez airport is an hour to the north..


Text and photos copyright © About-France.com 2009 - 2022
This site uses cookies, and by continuing to use our site you are agreeing to this. To remove this message click or else ask formore details