The capital of the French Riviera

Discover Nice -  a guide for visitors

Nice, showing location of main sites.  The area covered by this map is just over 3 km (2 miles) across.

A bit of history

Way back in the 18th century, a fashion developed among the English aristocracy and the new class of wealthy merchants and factory owners, to vist Italy and see the great sites of the ancient classical world.
One of the easiest ways for travellers to get to Italy on their "Grand Tour", as it was called, was to cross France to Marseilles, then take a boat along the coast. Among the stopping places on this sea journey was the small port of Nice; the coast here had an exceptionally mild climate, and it was not long before some English visitors took to the idea of wintering in this idyllic spot between the Alps and the Mediterranean. In an age when modern central heating had not been invented, It was so much more pleasant to stay in Nice than return to a cold damp English winter. Mediterranean tourism had begun.
By 1820 there was a sizeable British colony in Nice; and in 1822, during a bad winter, the Rev. Lewis Way decided to employ local workmen to build a fine walkway along beside the beach. Locals called it the "Promenade des Anglais" the Promenade of the English, a seaside esplande that was thus, apart from hotels and inns, France's first custom-built piece of tourism infrastructure. In 1864, the railway arrived, making Nice far more accessible from Paris and northern Europe. And Nice has never looked back.

Eastern end of the beach at Nice – the sea at Nice attracts swimmers and bathers for about seven months of the year.
Since then, Nice, with its wonderful climate, has continued to attract wealthy visitors, and more recently mass tourism, from all over Europe and the world. Russians were among the early visitors, and since the nineteenth century Nice has been home or second home to many Russians. Nice's Russian Orthodox cathedral, which is now the property of the Russian Federation, is one of the city's fine buildings, and the largest Russian orthodox cathedral in western Europe.
In the days when the early English tourists began visiting Nice, the city was not part of France, but part of the Kingdom of Sardinia, which covered an area that is now mostly in Italy. It was not until the signing of the Treaty of Turin in 1860 that the Duchy of Savoy and the County of Nice were ceded to France.
Consequently, Nice and its area have a culture and traditions that have much in common with those of Italy. While the city's many fine restaurants and hotels serve the best food in the French tradition, local specialities in and around Nice have a distinctly Italian and Mediterranean flavour;  Pissaladière is a kind of onion pizza with anchovies; and Nice ravioli, or ravioles, need little introduction. Another local speciality, "les farcis", litterally "stuffed things", are vegetables, notably aubergines or courgettes (zucchini), stuffed with a meat rice and herb mix. Socca, known in Italy as Farinata, is a seasoned pancake made from chick-pea flour and olive oil. As a seaport, Nice is also a town known for its seafood, including dishes with the classic Mediterranean fish red mullet (rouget) and sea bream (dorade).

Tourist attractions in and around Nice

The number one tourist attraction in Nice is quite clearly the sea. With 7 kilometres of beach along the Promenade des Anglais, Nice has one of the longest and most famous beaches of the French Riviera. It's worth noting however that the beach is made of small pebbles, not sand – which does not seem to have deterred the millions of bathers who come here each year. 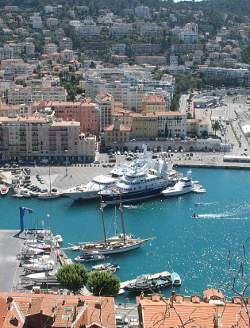 Entrance to the old port.
To the west of the old city is "Castle Hill" - La colline du château, whose former fortress was demolished three hundred years ago. Today Castle Hill is a park filled with luxuriant Mediterranean trees and shrubs, separating the beach to the west from the old port, le vieux port, to the east. The old port is nowadays a yachting marina, where visitors can come and admire the luxury yachts of the super-rich. A warm evening wander round the old port can be an unusual experience, with the underwater floodlights on some yachts shining through the clear blue water.
The old city of Nice arcs round inland from "Castle Hill", from the Promenade des Anglais to the old port. Most of the historic quarter, including the famed flower market, is just behind the east end of the beach. Entering the old city, one moves from the open spaces of the Promenade des Anglais into the narrow streets of a traditional north Mediterranean city. As in Italy, the narrow streets are flanked by tall houses, up to five stories high, and painted in warm colours, reds, yellows and ochre. In many places  restaurants spill out of the old buildings, their chairs and tables half covering the streets where vehicles could not pass easily even if they were allowed to. In warm weather, the aromas of Mediterranean cooking drifting out from the kitchens can be a mouth-watering experience. Even if Nice had nothing in the way of museums and monuments, it would be a place whose charms would be enough to satisfy many of its visitors.

Restaurants spill out into the narrow streets in the heart of old Nice.
But Nice does have museums and monuments. Until recently many of them were free; sadly charges have now been introduced.
Best of these is the Musée Matisse: to get there take bus 15 from stop Deloye Dubouchage, near the hotel Crillon). Located in a villa, the Matisse Museum has a great collection of works spanning the artist's lifetime.
Half way up to the Matisse Museum, the bus route takes you past another great museum, the Chagall Museum, on the Boulevard de Cimiez. The collection comprises some 400 works by Chagall, including the series of 17 of Chagall's great biblical paintings.
Even closer to the old city is the MAMAC, or Museum of modern art and contemporary art, a French and American modern art museum, with works by Yves Klein, Niki de Saint Phalle, Andy Warhol, Roy Liechtenstein, and many others.  This museum is located just 100 metres from the Place Garibaldi.

Nice's Russian orthodox cathedral.
For those with more classic tastes, the Nice Fine Arts Museum, the Musée des Beaux arts , has a collection of French and European art from the 16th to the 20th century, with works by Van Loo, Fragonard, Corot, Daubigny, Boudin, Monet, Sisley and Raoul Dufy, to name a few.
Nice's other very popular site is the Russian orthodox cathedral, a classic Russian building that might look more in place in Moscow or Saint Petersburg.


In the area - the Cote d'Azur

Nice is well connected to the Riviera coast and to the Alpine hinterland by public transport. The train line runs along the coast, and the Nice urban bus network spreads well beyond the city limits. Tickets are cheap.
One easy trip that can be well recommended is to take bus line 81 just four or five kilometres east along the coast to Villefranche sur Mer.This is a delightful small old seaside town, hemmed in between mountains and sea, with narrow streets and small beaches. Then continue to the next seaside village of Beaulieu sur mer. Within walking distance of Beaulieu is Saint Jean Cap Ferrat, the most exclusive of Nice's suburbs, on a rocky peninsula.

House and gardens of the Villa Ephrussi de Rothschild.
There is a footpath along the water's edge from Beaulieu to Saint Jean; and at Saint Jean, garden lovers should climb the hill to visit the exquisite house and famous gardens of the Villa Ephrussi de Rothschild.
To the west of Nice, a popular place to visit is Cannes, famous for its film festival. It is easily reached by train – which is also the best way to get to Monte Carlo, fifteen kilometres east of Nice.
For a day-trip into the mountains, the narrow-gauge Chemin de Fer de Provence will take you from Nice to Annot and back. The metre-gauge railway leaves from a small station about 400 metres north of the main train station, following up the valley of the river Var, through dramatic scenery and into the foothills of the Alps. Trains continue from Annot as far as Digne - but that is a two day trip.

Click here for more on visiting the French Riviera

With its well-served airport, Nice is an excellent choice for a long weekend break or a short visit at any time of the year

By plane - Nice airport:  the busiest international airport in France outside Paris. Served by many carriers from all over France and Europe and even by Air France from the USA.

By train: direct TGV service from Paris (over 6 hours),  Lille, Lyon and Marseille.  For timetables and online tickets (France and Europe), see Trainline.com .

By road : Nice is over 12 hours drive from Calais, and over 9 hours from Paris.

Photo top of page: view from Castle hill over the roofs of old Nice, to the famous Baie des Anges, or Bay of the Angels.

A selection of carefully chosen hotels in Nice.

These hotels are conveniently sited in or near the city centre, and all have goodwrite-ups. Click links for details and to book at best rates .

Five stars: ★★★★★
The Hotel Negresco Iconic hotel located on the Promenade des Anglais, facing the sea, a home from home for the wealthy and glitterati of Europe and America for more than a hunderd years.


Three stars  ★★★
Recommended ...
The Hotel les Cigales Between the station and the sea, 300 metres in from the Promenade des Anglais. Small classic hotel, 19 rooms, with air con and wifi. No car parking, but bicycles available for rent .

Hotel Cresp One of a small number of hotels in the old city; a 19th century building 100 yards from the sea front and close to the market. Rooms are on the 3rd floor, with access by lift / elevator.

Backpacker hostel
Recommended ...
Villa St. Exupery beach hostel
Four minutes from the beach. Has a range of dormitory and private room accommodation. Open to all.


About-France.com is an independent user-supported website, and may receive commission from sales made on selected partner websites accessible through affiliate links.

Box of red mullet in the fish market


About-France.com respects your privacy. This website does not collect personal data, and cookies are used solely to gather anonymous audience statistics,and enable certain essential page functions. To remove this message, click or else request more information.