Bastides: a network of medieval towns 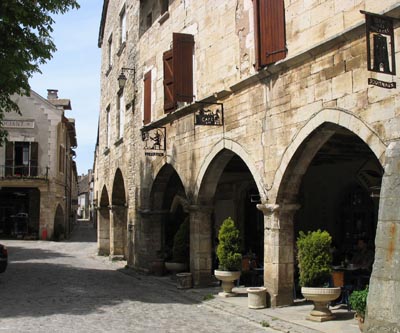 Villeneuve d'Aveyron, a small tranquil bastide.
The "Bastide" towns of southwest France are a growing tourist attraction, and comprise one of the largest collections of  well-preserved medieval townscapes to be found anywhere in Europe.  Obviously, the built environment of the more important bastides has been significantly modified since medieval times, but in many of the more rurally sited bastides, the layout of streets and buildings has remained virtually unchanged for over six centuries, if not longer, and many of today's buildings have walls, if not much more, that date back to the early days of the town.

There are said to be some 500-700 bastides in France, depending on how wide the definition is extended. Most of these are the southwest, and the majority of them were built in the two centuries from 1200 to 1400. At the time, the southwest of France was a frontier region, belonging partly to France, and partly to the kings of England. It should be remembered that until the mid fifteenth century, when the "English" were to all intents and purposes driven out of France, the kings of England, French-speaking, were actually 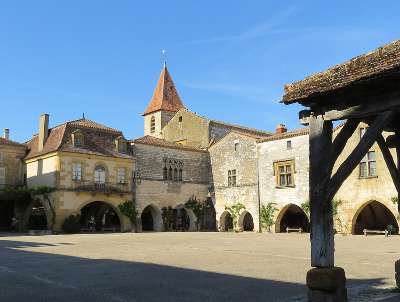 Monpazier, in the Dordogne area.
Angevins, one of the four great French dynasties, who had moved their power base from Angers (in the Loire valley) to England, but still had large possessions in France, notably Aquitaine.

The large number of bastides in the southwest of France were set up in order to establish a more modern society in what was, at the time, a rather wild and inhospitable part of Europe. The establishment of bastides was a way for rulers to bring the population together in centres which could be more easily controlled and defended than isolated farmsteads or hovels, while helping to develop trade and other activities associated with the town. The bastides, by promoting economic activity, also allowed the lords who founded them to raise more taxes, while ensuring a better standard of living - and also more importantly the status of freemen rather than serfs - for the people who moved into them.

Since they were built at a time of relative peace and prosperity, before the start of the Hundred Years' War, the early bastides were not fortified; however once Anglo-French relations deteriorated into a state of on-off conflict, many bastides were fortified either on the initiative of individual occupants, who built walls at the outer end of their properties, or by the coordinated building of town walls. 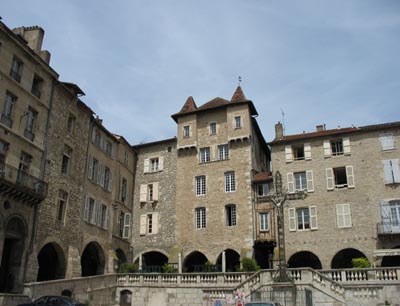 The main square of a large bastide town, Villefranche de Rouergue
It is sometimes said that bastides were established in a fairly arbitrary manner, often on greenfield sites; but in actual fact, most were set up on the sites of existing villages or at the intersections of routes. It seems unlikely that any bastides were built in areas where nothing existed before; in a sense they were "new towns", but their rationale was very different from that which inspired the new towns of the twentieth century in Britain, France or other counties. They were built in order to put some order into society, not to accommodate a rapidly growing population.  They are not all built on hills, as is sometimes written. For instance, while the much-visited bastide of Cordes sur Ciel sits on a hilltop, Villefranche de Rouergue, not too far away, sits at the bottom of a fairly deep valley.

Most bastides are laid out on a grid pattern, with a central square; while the grid pattern may  have been inspired by the 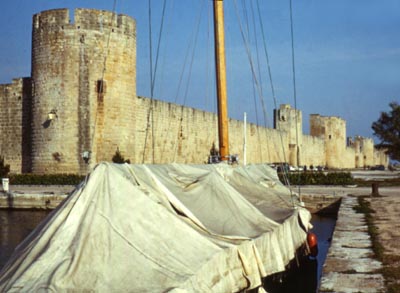 Finely preserved bastide on the Mediterranean coast : Aigues Mortes, based on an earlier Roman "castrum".
model of the roman "castrum", of which there were plenty of examples in the south of France, such as the walled city of  Aigues Mortes, on the edge of the Camargue, the medieval port from which Crusaders set forth (photo right). the idea of the central square may actually have come from the Islamic world, either via the crusaders or via  moorish Spain. As likely as not, there is some truth in all these theories.  The central square of a bastide is generally surrounded by arcades; the central square served as the commercial hub and market place, and was sometimes equipped with a covered market hall. The main roads in the grid are knowns as carreyras, or carriage ways, since they are wide enough for carts.

The main bastide area covers most of  Aquitaine and Occitanie regions of France, stretching from the Dordogne to the Aveyron, and down to the Spanish border. The largest concentration of bastides is in the Lot et Garonne department (47), along what was the shifting boderline between the English and the French held lands.

Among the more famous, best preserved or most attractive bastides are:

Fortified gateway to a bastide town

Find hotels in or near the most attractive bastide towns.

Aigues-Mortes
Monpazier
Domme
Eymet
Villefranche de Rouergue
Mirepoix
Montflanquin
Villeréal
Labastide d'Armagnac
Cordes sur Ciel
Other areas
About-France.com is an independent user-supported website that does not track visitors and carries very little advertising, Links to selected affiliate partner websites such as Booking.com may generate commission on sales at no cost to the user.


Thinking of moving to France?
Check out  Living in France, the About-France.com guide