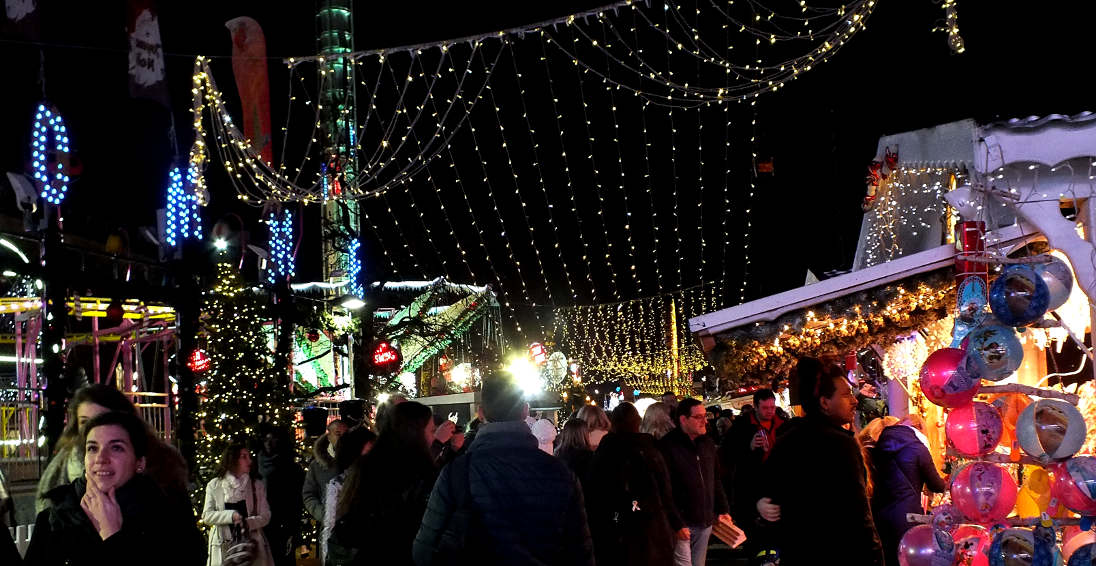 For the past two years, Covid cancelled most Christmas markets. But in 2022, Christmas in France is more or less back to normal.

A Christmas shopping trip can provide the ideal excuse for a short trip to France. Paris and other French cities are places that go to great lengths to make sure that the Christmas shopping experience is something to be remembered - a gala of lights, sounds and old seasonal traditions. And there are plenty of bargains to be had.    As is the practice throughout Europe, retail prices displayed always include  tax; i.e. French sales tax does not have to be added to the price displayed. 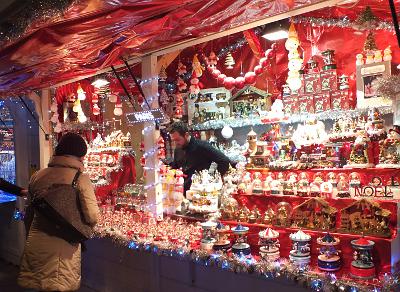 Christmas market stall in Paris
In Paris, the most popular Christmas lights are those decorating the Champs Elysées; but they are just the icing on the cake. The streets and the big shops in all the shopping areas, notably the department stores such as Galeries Lafayette, in the Boulevard Haussmann area, vie with each other to produce the most elaborate Christmas decorations and Christmas windows.
Big stores and stores selling up-market French luxury goods such as fashionwear or perfume and cosmetics can be guaranteed to put on particularly lavish and impressive window displays ; however bargain hunters should not expect to find a lot of really good buys, as winter sales in France cannot start before the first week of January.

The French capital offers a number of "traditional" Christmas markets - Les Marchés de Noël - offering a wide array of art and craft products, as well as local specialities and special gastronomic delights for the Christmas dinner table.
The main Christmas markets in Paris are located at....


Other Paris Christmas markets (dates to be confirmed) 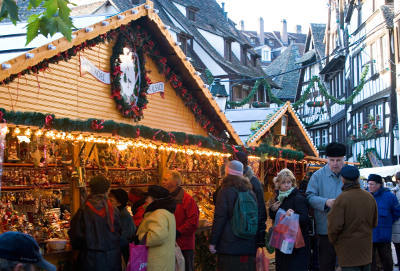 Christmas market in Strasbourg - Photo © CRTA / Meyer
The Capital of Alsace, in eastern France, is reputed to be the home of Christmas festivities; and the annual Christkindelsmärik, or Christ-child- market, held around the ancient cathedral in the heart of the historic quarter, is the most famous Christmas market in France, if not in Europe. It was first held in 1570. Today the event draws hundreds of thousands of visitors, who come to wander through the narrow streets, and admire and buy from the hundreds of stalls offering traditional Christmas wares, craft products, and gifts of all shapes and sizes.
.
Strasbourg can be reached by motorway or by train. Click here for Strasbourg city and hotel guide.

OTHER FRENCH CITIES -
All French cities pull out the stops for Christmas, specially those with historic centres, where the Christmas lights traditionally bring in large numbers of shoppers and admirers. The tradition of Christmas Markets has been taken up in many French cities, notably in Eastern France, in towns such as Besançon, Montbéliard, Colmar  and Nancy, which hold big events. But there are also big Christmas markets, open for at least three weeks up to Christmas, in Clermont Ferrand, Bordeaux, Lille (late  November - late December), Metz, Arras and elsewhere; other towns and cities put on smaller, shorter Christmas markets.

In city centres, the pre-Christmas period is the busiest time of year for shopping in France; many shops extend their 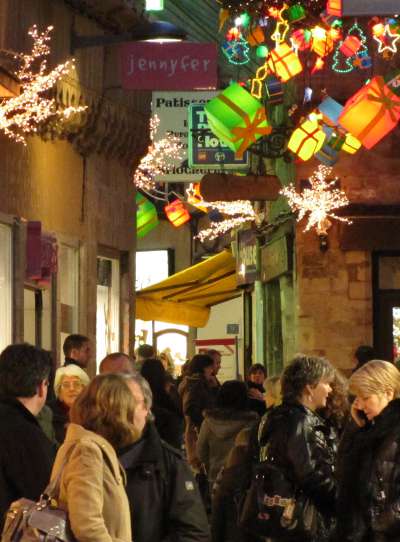 opening hours, notably by staying open at lunchtime, and - during the last three weekends before Christmas, opening on Sunday afternoon. Sunday opening is particularly common in towns and cities that have Christmas markets. Generally speaking, all shops that do a brisk trade in the runup to Christmas stay open until at least 7 p.m.
Out of town supermarkets and shopping centres tend to remain open slightly longer in the period before Christmas, and in particular are open on Sundays (typically from 10 a.m. to 7 p.m - but it is always important to check locally).
In Calais, the Carrefour supermarket in the Cité de l'Europe near the Channel tunnel exit is open 8.30 a.m. to 10 p.m six days a week, and 9 a.m to 8 p.m on Sundays during the pre-Christmas period; there are special Christmas events in Calais, including a Christmas market.


Click for general information on shop opening times in France

French wine for Christmas;
If buying in France, check out the About-France.com guide to buying French wine
If not in France, or visiting without a car,  buy online for delivery to the UK or other parts of Europe (except CH, IRL, SE and N) see French wines direct

A guide to Christmas shopping and Christmas markets in France - 2022  - Paris, Strasbourg and other cities

About-France.com is an independent user-supported website that does not track visitors and carries very little advertising, We may receive commission from sales made on selected partner websites accessible through affiliate links.

Wary of going out shopping? If so, let France's shops come to you