About-France.com -   the connoisseur's guide to France - in English

A Tour of eastern and southern France ...

The main features of the 2019 Tour de France are that it is almost entirely in the eastern half of France - indeed much of it will be close to France's eastern borders. It is also being billed as the "highest Tour de France ever",  with most of the route taking riders through the upland areas of southern France.
See stage details below 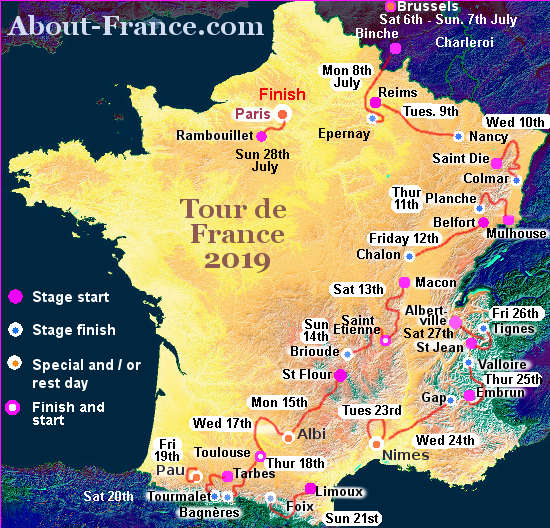 Click stage anywhere along the route in France for regional tourism info
Copyright : If you copy this map on your blog or non-commercial website, you must credit it to About-France.com
A GUIDE TO THE ROUTE


The main feature of the 2019 Tour de France is that it is almost entirely in the eastern half of France - indeed much of it will be close to France's eastern borders.  Riders will go nowhere near Normandy, Brittany, the Loire Valley or Aquitaine, apart from the obligatory stages in the Pyrenees.
The 2019 tour is a race for hill-climbers. From Stage 5 onwards, when riders face the first climbs in the Vosges mountains until the last day's ride from Rambouillet to Paris,  riders will be contending with mainly hill country or mountains every day but two (stages 7 and 11), with twelve separate stages taking them close to or above the 1000 metres altitude mark. Hill and mountain stages involve two days in the Vosges mountains, one in the Monts du Lyonnais, two in the Massif Central, four in the Pyrenees, and three and a half days in the Alps. 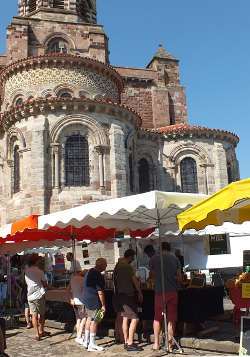 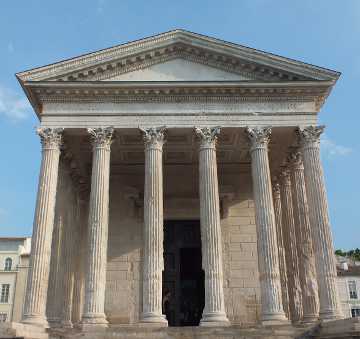 Nimes - with some of the finest Roman remains in France .  From 21st to 23rd July

Part of the "caravan" - that preceeds the  riders round the course.
France you don't know...

This site uses cookies, and by continuing to use our site you are agreeing to this. To remove this message click or else ask for more details