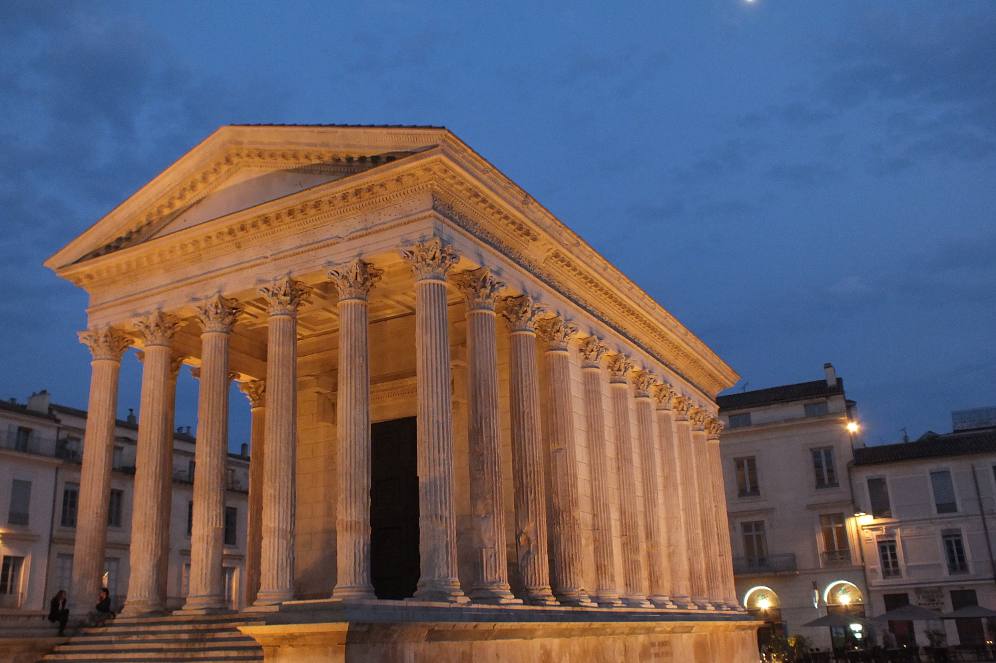 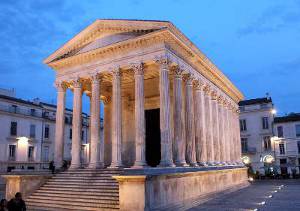 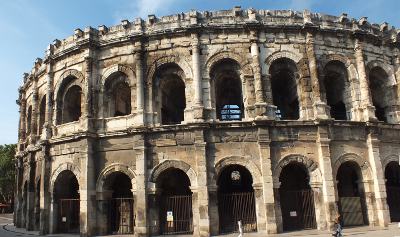 
The Romans occupied France - or significant parts of it - for almost five hundred years. Julius Caesar launched his invasion of Gaul (what we now call France) in the year 58 BC; and the Romans eventually departed, or merged into the local population in the fifth century AD.
Their presence played a determining role in the development of the French nations that followed. The language of the Romans, Latin, evolved into medieval French and later into modern French. Many of modern France's great cities - Paris, Lyon, Reims, Rennes, Marseille and others can trace their history back to Roman times if not earlier. The people who lived in Gaul in the 4th century and beyond have been long known as the Gallo-Romans (i.e. Gallic Romans) –  an interesting contrast with the situation in Britain, where the equivalent population is referred to as Romano-British (i.e. Romanized Britons).

The finest and densest collection of Roman remains in France today are to be found in and around Provence. Indeed the name "Provence" is of Roman origin, as this area was the first province to be set up under the Roman empire. Roman "Provincia Gallia Narbonensis" stretched along most of the Mediterranean coast - much more than today's Provence - and its capital was for a long time the city of Narbonne, now in Languedoc.
Little of Roman Narbonne survives today; there is just a section of Roman road, and the Horreum, a system of underground cellers.

A trip round Roman Provence 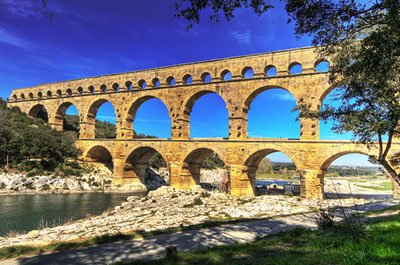 Click for best online rates for hotels in or near the towns with the finest Roman sites in France.

Nimes
Arles
Dijon
Orange
Lyon
Vaison
Autun
Saintes
Limoges
Poitiers
Reims
Besançon
Other areas
About-France.com is partnered with Booking.com, to bring you the best online prices
The best place to admire the remains of Roman "Provincia Gallia Narbonensis" - the best set of Roman remains in France - is the small city of Nimes, often called the Rome of France. Nimes boasts half a dozen well preserved Roman sites, most importantly the Maison Carrée (photo top of page), a former temple; this is arguably the best preserved Roman temple anywhere in the world.  Nearby, the Roman arena is also very well preserved, and still regularly hosts events to this day. Nimes also has two Roman city gates, and, in the Jardins de la Fontaine, a Temple of Diana and a large watch tower, known as La Tour Magne.
Nimes now also boasts a new state-of-the-art museum, the Musée de la Romanité, or Museum of Roman times, opened in 2018 and located right next to the Arena. Tickets available online ► here .

Twenty-five kilometres east of Nimes, beside the village of Remoulins, is another of the surviving wonders of the Roman world, the magnificent Pont du Gard aqueduct, the highest and best preserved aqueduct of the Roman world. The Pont du Gard is a big tourist attraction, complete with interpretive centre. Tickets available online ► here .

After Remoulins, it is 40 km drive to the small town of Saint Rémy de Provence: just outside Saint Rémy is a large archeological site covering the Roman city of Glanum. Little remains standing in Glanum, except the unusual mausoleum of the Julii, and a finely sculpted triumphal arch, both of which have finely preserved Roman sculptures.
From Saint Rémy, it is then another 25 km drive southeast to the town of Arles, on the banks of the Rhone.  After Nimes, Arles has the best collection of Roman remains of anywhere in France, and notably its large and finely preserved Arena. Close to the arena is a Gallo-Roman theatre. Other Roman sites in Arles include the Alyscamps, a Roman necropolis, and remains of a Roman aqueduct.
From Arles, it is 35 km back to Nimes... or else spend another day or two visiting the Camargue.
One other interesting Roman site is the Pont Flavien, a Roman bridge with two triumphal arches. It is located at Saint Chamas, 40 km west of Aix en Provence.

More Roman sites in the south of France 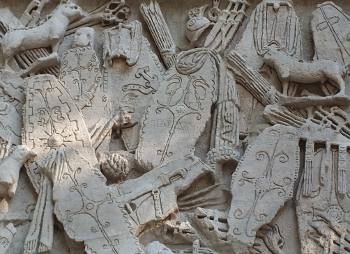 Fine Roman sculpture on the triumphal arch at Orange
Among other surviving Roman sites in the south of France, the best are to be found in or near the Rhone valley, the great line of communication from the Mediterranean to northern France and Europe.
There are three interesting Roman sites in the Vaucluse department
Orange (north of Avignon): This town has an impressive Roman theatre, used each year for the Orange opera festival, and a fine triumphal arch, standing in the middle of  N7 road on the northern exit from the town.
Vaison la Romaine, northwest of Orange. Ruins of the Roman town,  a 1st century AD Roman bridge and fine and well restored Roman theatre.
Also in the Vaucluse department, near Apt, the Pont Julien is a well-preserved Roman bridge where the old Via Domitia crossed the river Calavon.


The best Roman remains in other parts of France


Autun (Burgundy) Two impressive Roman city gates, and the remains of one of the largest Roman theaters in Gaul. Also the remains of a Roman pyramid and a Temple of Janus.

Alesia (Burgundy) Interpretive centre with historic recreation of Roman defences on the site of the battle at which Julius caesar conquered the Gauls. 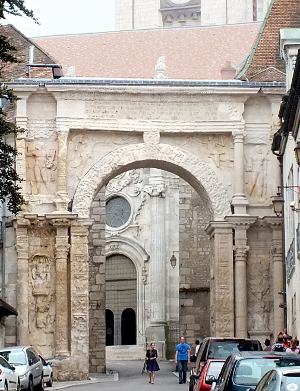 Besançon ; Roman arch, beside the cathedral
Besançon & Mandeure (Franche-Comté). Besançon boasts a fine Roman triumphal arch, "la Porte Noire" in the city centre, next to the remains of a theatre. The city museum has some impressive mosaics.  Mandeure, 70 km northeast, has the remains of a Roman theatre, in a very rural setting.

Paris - Little of Roman Paris remains; but parts of Roman baths can be visited in and beside the Muée du Moyen Age, just off the Boulevard St. Germain in the Latin Quarter 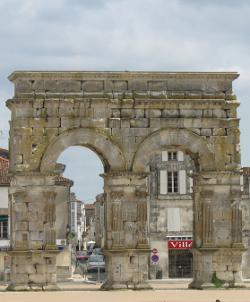 Glanum - Mausoleum of the Julii