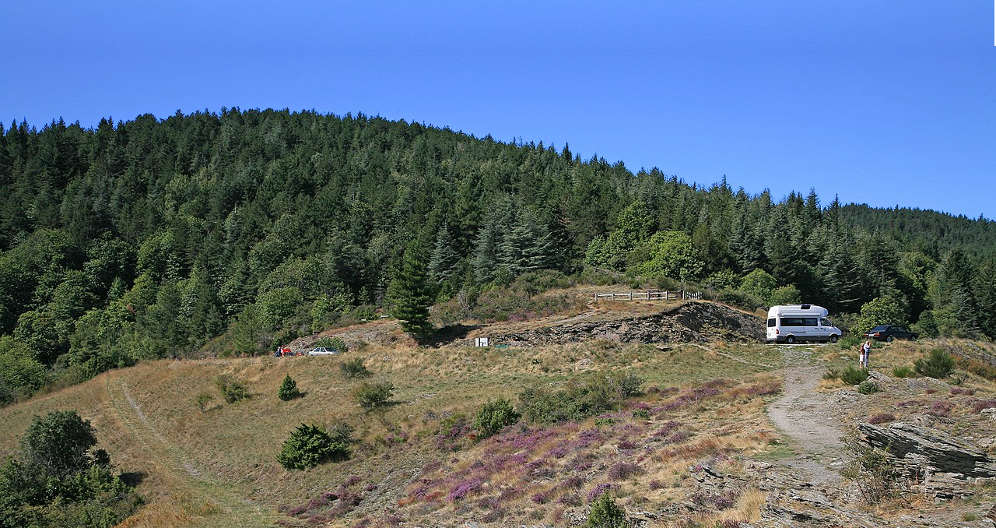 A slow drive through France, on routes where driving is still a pleasure

► You are here:   France  ›
Driving   ›
On byways through France 3 - Through the Cévennes
About-France.com - the thematic guide to France
Part 3 of a route guide to leisurely motoring through France.  This final stage offers a choice of routes from north of Mende, capital of the Lozère department, to the Mediterranean. The eastern route (this page)  takes you through the beautiful  Cévennes national park, to a final destination at Les Saintes Marie de la Mer, in the Camargue.  The western route (description coming) takes you through the Tarn Gorge, over the Causse du  Larzac and down through Cathar country to the coast near Perpignan.
Where to stay About-France.com has selected a range of hotels along the route. Click markers to book online with our partner Booking.com. There are also campsites and motorhome overnighting areas in many of the small towns along the way.

Byways through France 3a:  Languedoc - Cevennes : From the Lozère to the Camargue through the Cevennes mountains and national park

Map markers: the clickable o markers on the route locate and give very brief information on places described in the route guide. Zoom in if necessary to separate markers.

Continued from Byroads through  Auvergne

Entering Languedoc on the D585 from Saugues, carry on due south until Chateauneuf de Randan        Standing at over 1200 metres, this is one of the highest small towns in France outside the Alps. T    he town stands on a rocky outcrop overlooking the surrounding area. This part of France was much fought over during the Hundred Years War, and Chateauneuf de Randan ★ was the stronghold of the baron Du Guesclin. Today it's an attractive and very rural "bourg".
Leaving Chateauneuf, take the N88 as far as Mende, in the Lot valley. There may be a few HGVs on this road, which is part of the direct route from Lyon to Toulouse.
Mende ★ is one of the smallest departmental capitals in France. It has a small  cathedral, and a historic centre with  shops. The cathedral, dating from the Middle Ages, was largely rebuilt in the early seventeenth century. The old city is also well known for its old public fountains and the medieval Pont Notre Dame over the river Lot.
After Mende there are a number of routes across the Cevennes in the direction of Nimes and Alès - all of them on twisting roads. The route selected on this page is the most scenic and also one of the easier, as much of it is on higher ground.
Head south out of Mende on the N88 following signs for Millau, Rodez and Alès.
For the next 100 km, you will drive right through the beautiful  Cévennes mountains★★, the central area of which is one of France's original National Parks.
At Balsièges, turn left onto the N106 following signs for Alès and Nimes. After 300 metres,  stop following Nimes and Alès, and turn right onto the D986 signposted Ispagnac and Ste. Enimie. After 5 km bear left onto the D231 signposted Molines and Ispagnac. Two km later you will join the D31. Just before  Ispagnac, at Molines, you will reach the  D907B.
For the Tarn gorge route and on towards Carcassonne (pink on the map) turn right here. For the Cévennes route (green on the map), turn left.
You are now in the upper Tarn valley ★★. Continuing on following the green route, just after the village of Molines, you'll see on your left the bottling factory for Quézac mineral water, which produces 20,000 bottles an hour.  200 metres after the bottling plant, turn right to admire a medieval stone bridge over the Tarn .It is another 10 km up the Tarn valley to the small town of Florac.  Watch out here for large birds of prey circling overhead. Vultures were reintroduced into the Tarn valley back in the early 1990s, and today the valley and gorges are home to hundreds of nesting pairs. With their 2-metre wingspan, these soaring birds are easily recognisable.
At Florac ★, or just after Florac, turn right to cross the river so that you exit on the D907 following Merueis and Saint Jean du Gard. You are now driving through the heart of the Cevennes, an area with a bloody history.  In the 16th and 17th centuries, people in this part of France, far from big cities, converted to Protestantism. But in 1685 King Louis XIV revoked the "Edict of Nantes", which had guaranteed religious freedom, and Protestantism was outlawed. There followed 30 years of strife in the Cevennes, during which many of the Huguenot (protestant) villages were destroyed, and the people massacred. The "Camisards" led a long-running guerilla campaign against the catholic Royalists, and Protestantism was never defeated. Today, the small towns in this area, including Florac, and many villages too, have protestant "temples" as well as catholic churches. The story of the struggle for Protestantism in the Cevennes is told in the small Musée du Désert, near Saint Jean du Gard.

Mont Aigoual: at 1567 metres, this is one of the highest peaks in the Cevennes. It is not on our route, but can be reached by continuing south on the D907 after Florac, then the D119, then the D18 and following the signs. Don't miss the sharp hairpin turn off the D18 to the D119 in the village or Rousses. There is a road to the top of Mont Aigoual, and on a clear day, the views are stupendous.
Six kilometres south of Florac, turn left onto the D983. At Col du Rey (987 metres altitude), the D983 forks left, but you carry straight on on what now becomes the D9 which will take you almost to Saint Jean du Gard. You are now on the "Corniche des Cévennes"  - or Cevennes high road -, a former royal highway first built in the 18th century to help the King's armies to keep control over the unruly Cévennes. There are lots of viewpoints along the way.  At the Col des Faisses - 1018 metres, less than 2 km after the Col du Rey, stop to admire breathtaking views over the Cévennes. On entering the Gard department, the D9 becomes the D260 before joining the D907 for the final 3 km to Saint Jean du Gard. ★ This is an attractive small town, with old buildings and the added attraction of the Cévennes steam railway.
From Saint Jean du Gard, continue to Anduze ★★ a typical small Languedocian town, with a historic clock tower, grain market and other old buildings - as well as being the other end of the line for the Cevennes steam railway. Just outside Anduze don't miss the Prafrance botanical gardens, first established in 1856, covering 34 hectares, the finest plantation  of bamboos in Europe.
After Anduze, you are on the Mediterranean plain. It's still rural, but you are back into a fairly heavily populated area with lots of roads. Our recommended route will take you to Uzès ★★ a very attractive small town with famous 11th century octagonal cathedral tour,  other medieval buildings, and popular markets;   then to Remoulins - site of the amazingly preserved Roman aqueduct, the Pont du Gard ★★★ (UNESCO world heritage site) , then to Saint Rémy de Provence ★, past the Roman remains and triumphal arch of Glanum ★★ (See Roman France) then to les Baux de Provence ★★, then across the Rhone and into Provence, at Arles ★★★ (Roman arena, museums). After Arles, cross back to the west bank of the Rhone, and take the D570  across the Camargue ★★★ to les Saintes Marie de la Mer ★★, your destination. As you go, not the rice paddies and look out for the native white semi-wild Camargue ponies.
Between Anduze and Arles, there are so many roads and turnings in this area of coastal plain, that a road-by-road route guide would take pages. Better therefore to use a satnav, or get a good local map, and choose your own way from town to town. You may want to include a visit to the historic city of Nimes  or go to the Camargue via the ancient walled port city of Aigues Mortes.
And then decide where to go next.

On byways through France
Previous stages (north > south )
Alternatively reach the start of this route guide via the A71 - A75 motorway route, leaving the A75  Clermont-Ferrand to Montpellier motorway, exit 34. Then follow the  D806 to pick up the route across the Cévennes  at  Mende.


Copyright text and photos © About-France.com 2008 - 2022 except where otherwise stated.


This site uses cookies, and by continuing to use our site you are agreeing to this. To remove this message click or else ask formore details