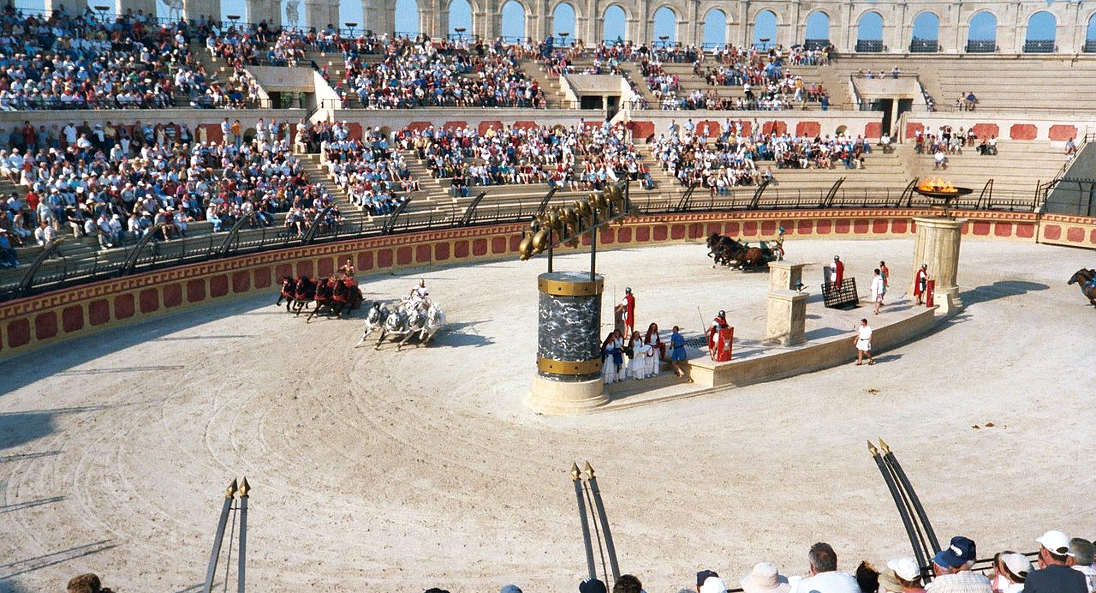 Discover the best living history  park in the world

Imagine a walk-on film set where you can sit in a 6,500 seat Roman stadium as the charioteers race round, as they did two thousand years ago. Or wander along a medieval street that looks as if it has been there for a thousand years...  Or sit beside a tranquil river where a  Viking longship prepares to attack a fortified village in front of your very eyes. Or watch an evening sound and light show, played out by up to 1200 actors on a fifty-acre stage.  This is Puy du Fou,

The second most visited theme park in France, after Paris Disneyland, and the world's greatest, and most authentic, living history park.

. In March 2012, at a ceremony in Los Angeles, it was awarded the prestigeous "oscar" of the theme park industry, the Thea Award, as world's best theme park for 2012.

Founded in 1977 by a young local aristocrat with a passion for history, Philippe de Villiers, the theme park has developed from its original concept as a stage for son-et-lumière type pageants, to become a multi-attraction historic theme park providing a trip back in time to different ages and times of the past.
The theme park is located in the extensive grounds of  the ruined 16th century castle of Le Puy du Fou, which was bought by the Vendee council in 1974, with the hope of developing it into a tourist attraction. That hope has been more than fulfilled.
Unlike many theme parks, le Puy du Fou is not part of a large corporate enterprise, but is a joint effort run by a grouping of local businesses and non-profit associations – and is thus a self-financing venture that is firmly anchored in local life.
A visit to the Puy du Fou theme park takes in a series of action-packed shows – involving hundreds of actors, horsemen, swordsmen and volunteers – and a discovery of the park's various historic reconstructions, from Roman times to the Belle Epoque of the nineteenth century.
Unlike Disneyland, le Puy du Fou – while making sure that the attractions all provide a great visitor experience – also takes pride in ensuring a fair degree of historical accuracy. The sets and the shows are evocations of the world as it really was... with a few special effects added in.  A Roman arena, where gladiators fight it out and charioteers race; a medieval village attacked by a Viking longship, an 18th century village, or on a rather more fanciful note, the large indoor stage presenting the swashbuckling show called "Richelieu's Musketeers". There is also a unique falconry display called the Dance of the Phantom Birds, with over 100 trained birds of prey swooping down out of the sky. And lots more.... in all fifteen shows and four historic villages, an evening display of dance, light, water and music, plus other attractions as well.
In the summer holiday period (June to mid September), climax of the day is the famous "Cinéscénie", the original event around which the Puy du Fou theme park has subsequently developed and expanded. This magnificent after-dark spectacular of light, fireworks, sound and action,  set against the backdrop of the old Château du Puy du Fou, has been seen over the years by over 10 million spectators, and is  the world's biggest night-time show, lasting 1 hour and 40 minutes, involving 1200 actors and extras, and performed over a 50 acre stage.


Open from the start of April to the end of September. Taking bookings for 2021.
Advance entrance tickets available online from 37 € ► here .

Plenty of action, as a Viking longship attacks a riverside village.