An A-Z Dictionary of France
I 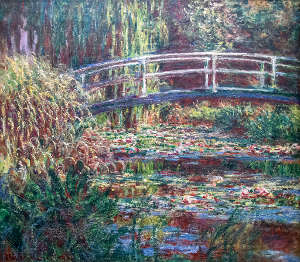 Photo above:  Impressionism France's great contribution to the history of art

What are idées reçues? Is the Ile de France really an island? What do the letters IUT mean ?  And what group of people are known as les Immortels ?

Ibis, Hôtels : one of the major hotel chains, belonging to the Accor Group. Ibis hotels can be found all over France, and in many other countries of Europe. They are mid-range hotels, generally two-star or three-star. See hotels in France.

Ici Paris: the original French “people" magazine, founded in 1945. Ici Paris is a weekly popular magazine, with a circulation of over 400,000. It is devoted to stars, romance and trivia, and is currently published by the Hachette group.

IEP - Institut d'Etudes Politiques : popularly referred to as Sciences Po, IEP are selective-entry schools of politics and economics, within the French university system. There are currently nine IEP, the most prestigious of them being the IEP de Paris. IEP provide a rounded multidisciplinary higher education and training for future leaders of the private sector and the civil service. They also prepare students for the gruelling competitive entry exams for the ENA, France's top school of administration, and other graduate schools. Students follow courses in politics and economics, but also languages, sociology, history and geography; this multidisciplinary approach, while going against the grain of many traditional concepts of higher education, is popular in France, and is much appreciated by students and employers . Graduates obtain a first degree or a masters degree, depending on the point of exit. The Paris IEP was founded in 1872, the others after the Second World War.  See Higher Education.

IFI - Impôt sur la fortune immobilière, or mansion tax, introduced by Emmanuel Macron in 2017 to replace the ISF (see below)

IFREMER - Institut français de recherche pour l'exploitation de la mer : Public research institute, whose mission is to study the resources of the oceans, and their commercial and industrial potential, within the framework of sustainable development.

IGN - Institut Géographique Nationale : national public service agency responsible for the official cartography of France, and the publication of geographic information. The IGN publishes popular series of  maps of France, including road maps and specialist maps. The IGN also runs the Géoportail website, offering satellite imagery of France similar to that provided by Google Earth.

Image d'Epinal : historically a crudely coloured popular print typically showing a religious, romantic or everyday scene, first popularised by Jean-Charles Pellerin, a printer in the town of Epinal (in the Vosges department). Today the expression is used, metaphorically, to describe an image or idea that gives a rather naive and rosy-tinted view of reality.

Immortels, les :  nickname given to members of the Académie Française (q.v.)

Impôt sur le revenu - Income tax. Income tax in France is levied as a progressive tax, with five rates going from zero to 40%. Income tax is charged per "foyer fiscal", or fiscal household, and recognised couples are taxed as a couple, not as two individuals. Thanks to a number of  tax allowances and deductions, about half of the working population in France pay no income tax.  However everyone pays the CSG and CRDS, which are forms of income tax in everything but in name, and correspond to a flat rate tax of 11%. If these taxes are included, then French levels of income tax go from 11% to 51%.

Impôt sur les sociétés  : Company tax or the French equivalent of Corporation tax.  A tax paid on the profits of companies. In 2008, there are two rates, the standard rate of 33.33%, and a reduced rate of 15% applicable to the first  38,120 Euros of profit, for small companies with a turnover not exceeding  7.63 million Euros

Impôts locaux: Local taxes, rates. Taxes paid by households and businesses on the basis of the property owned or occupied. For households, there are two local taxes,  the tax on property, called the taxe foncière, and the occupation tax, called taxe d'habitation.

Impressionists : Name given to a group of avant-garde artists working in Paris and elsewhere, mainly in France, from the 1870s to the 1920s. Though frequently called the "French Impressionists", the Impressionists were actually an international group, and  as well as the French painters Monet, Manet, Cézanne, Renoir, Pissaro and Degas, major artists from the group included the Dutch painter Van Gogh, the English painter Sisley and the American Mary Cassat, among others. The name "Impressionists" was taken from the title of a painting by Claude Monet displayed at an exhibition of works by avant-garde artists in Paris in 1874. The name rapidly became used to describe a style of figurative painting concerned more with the effects of light and colour on objects and scenes, than with objective portrayal of these objects, scenes or people. The vivid techniques of colour and light effects pioneered by the Impressionists had a lasting impact on the development of art in the twentieth century; in particular they influenced the significant movements in European art, including pointillism and the post-impressionists such as Signac, Fauvism with the works of Matisse and Vlaminck, the Nabis such as Bonnard and Vuillard, and even Cubism.

Indivision : legal term defining the status of property, notably land and buildings, owned jointly by the heirs of a deceased owner. French inheritance laws provide for the obligatory sharing of the estate of a deceased person among his or her direct descendants (children). When, as often, a person does not formally divide up their property among their heirs before death, all their estate passes jointly to their children or nearest family. Until such time as these heirs agree on how the estate will be divided among them, the estate remains in "indivision"; this means that no property can be sold off without the agreement of all the heirs. When one or more of these heirs is out of contact, or deliberately uncooperative, this can lead to a situation where property, notably buildings, remain empty and unsaleable for years on end. However, since 2007, the law has been modified to allow heirs representing at least 2/3 of the rights of ownership to apply to the courts for permission to sell a property; in other words, if two out of three children wish to sell a property, and the third does not, the courts can now prevent the third one from blocking the sale. The heir who does not wish to sell retains the right to buy out the shares of the other heirs. Note that property for which a surviving spouse has a right of usufruct cannot be sold off.
Shares in an undivided estate can be sold by any  heir who wishes to do so; but the purchaser remains bound by the rules of indivision.

Ineguy : Ewe's milk pressed cheese from the Basque region of south-west France, similar to other southern European ewe's milk cheeses such as Pecorino.

INSEAD -  (Originally Institut Européen d’Administration des Affaires) - One of France's top schools of management, located in Fontainebleau, south of Paris. It has a branch in Singapore. A private institution founded in 1957, INSEAD is one of the world's top business schools, and one renowned for its multicultural and "non-dogmatic" approach to learning. INSEAD's list of alumni includes the CEOs of dozens of leading international companies .

INSEE - Institut national de la statistique et des études économiques: This is the French National Statistical Institute. It is attached to the Ministry of Economic Affairs, and is responsible notably for conducting censuses and undertaking a broad range of statistical analyses of French society and the economy.

Inspection du Travail : The French labour inspectorate. Les Inspecteurs du Travail are civil servants whose job is to check that employers respect labour laws - as specified in the arcane Code du Travail. In France, the main job of these inspectors is perceived as being to verify compliance with laws regarding terms of employment, working hours, and pay; however their mission is also to check compliance with workplace health and safety regulations. Having the right to inspect businesses without warning, they are much dreaded by many employers, particularly by the directors of small and medium-sized companies (PMEs).

Institut de France  The Institut de France (French Institute), also referred to simply as "l'Institut", is a multidisciplinary learned society, including the members of the five French "Académies". It was founded in 1795. Its stated mission is to perfect the arts and the sciences through the meeting of great minds from different fields; and to manage the thousands of donations and legacies that it receives for this purpose.

Instituteur: until the 1990s, the word ‘instituteur’ referred to teachers in France's primary schools, or écoles primaires. Following the upgrading of the qualifications required to teach in the primary sector in France(a licence degree is now required), the title has been officially replaced by ‘Professeur des écoles’. However, particularly in rural France, local primary school teachers are still commonly referred to as ‘instituteurs’ – sometimes shortened (particularly in spoken slang) to instite.

Intermittents du Spectacle  -  People working intermittently in the media and culture sector, including part-time actors, stage hands and technicians. At the start of the twenty-first century, les Intermittents du Spectacle benefited from extremely attractive conditions for obtaining unemployment benefit – far less stringent that conditions applied to other types of worker. Judging that the system was being abused and exploited both by many workers themselves and by the media and production companies employing them, the government decided in 2003 to tighten the conditions of entitlement to unemployment benefit. This led to massive strikes and protest actions by the Intermittents, and even to the cancellation of the 2003 Avignon theatre festival. The rules were eventually tightened up in 2006, though Intermittents still benefit from an easier entitlement to benefits than most other employees.

ISF -  Impôt de Solidarité sur la Fortune : former French wealth tax, which was phased out by Emmanuel Macron in 2017. The ISF was long seen by the left in France as being a socially-justand redistributive  way of taxing wealth, but by the liberal right as a tax on success. Successive governments vowed to do away with it, but failed to do so as it was never a vote-catcher. However one of the pledges of Emmanuel Macron, as he ran for the presidency, was to make France a more attractive environment; the ISF was seen as one of the factors driving wealthy individuals, both French and foreign, to reside in, and therefore pay taxes in, other countries such as Belgium, Switzerland, or Monaco, where there is no wealth tax. Taking this into account,   studies suggested that the ISF was likely to have deprived the French treasury of more tax than it actually generated, and for this reason getting rid of the ISF was one of the first pledges on which Macron made good, after becoming president.  It was replaced by a mansion tax, the IFI.

IUT - Institut Universitaire de Technologie :  Institutions within French universities, benefiting from a certain degree of independence and  flexibility relative to normal faculties and schools. IUT were founded in the 1960s, within existing universities, as institutes of higher education offering two year diplomas, called DUTs, in technical fields. Since then, they have been developed, and now offer longer courses covering three or four years of study, including Licences (the equivalent of BA or BSc degrees) and DUTA, Advanced University Technology Diplomas.

Continue to the letter J