An A-Z Dictionary of France
O 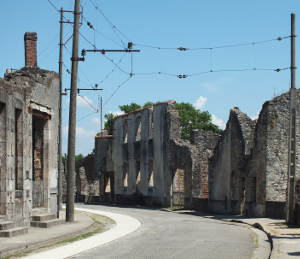 ► You are here:   France  ›
Dictionary  ›
O
What happened at Oradour sur Glane ?  And what was the OAS ?  And what exactly does Oc signify? And what is the Musée d'Orsay about ?  Answers to these and many other questions in this "O" section of the dictionary of France

OAS - Organisation de l'Armée Secrète - Secret army set up by French right-wing activists in Algeria in 1961, in the hope of stopping the process of  decolonisation and independence. The main leader of the movement was General Salan. In 1961 and 1962, the OAS was responsible for a campaign of bombings and assassinations inFrance and Algeria, targeting people in favour of independence. After the Evian agreements, paving the way for independence, the OAS tried in vain to provoke the remaining French colons into insurrection, through more bloody acts of terrorism, culminating in an assassination attempt on DeGaulle at Petit-Clamart, in the south-west suburbs of Paris . After the violence, hundreds of ex-members of the OAS were tried and found guilty, and three were sentenced to death. In an attempt at national reconciliation, many of those who were jailed were later amnistied.

Obélix - Cartoon character. A rather strong but overweight Gaulish villager, the sidekick of Astérix in the eponymous bande dessinée or cartoon series.

Obs - L'Obs is the title taken by the newsmagazine le Nouvel Observateur in Autumn 2014, to mark its fiftieth anniversary.  Le Nouvel Observateur, now l'Obs, is a left-leaning weekly newsmagazine. Since 2000, along with much of the print press in France, it has suffered from falling readership. In early 2014 it was bought by a trio of investors including Xavier Niel, the millionnaire founder and boss of France's very successful independent internet and phone company Free.fr.

Oc : the language traditionally spoken in the south of France, notably in the Languedoc (meaning Language of Oc region). Occitanian languages, the family of Oc languages (for it is more than just a single tongue), were historically spoken in "Occitania"(see below) from the Atlantic to the southern Alps, from parts of Spain to the Val d'Aosta in Italy. Oc languages include Provençal. Linguistically they are close to Catalan, the traditional language of Catalonia in Spain and the Pyrénées Orientales department of France.

Occitanie - Historic. Occitania, the southern area of France, from the Atlantic to the southern Alps, but also including parts of Spain to the Val d'Aosta in Italy, where the Occitanian language, Occitan or langue d'oc, was formerly spoken.

Occitanie - Region The name chosen for the new region, capital Toulouse,  that came into existence at the start of 2016 with the merging of Midi Pyrénées and Languedoc Roussillon.

Ockrent, Christine : Born 1944,  a Belgian journalist who became one of the most important television news and current-affairs presenters on French television. After working in the USA on CBS News's 60-Minutes programme, Ockrent returned to France, where in  1981 she became the first woman to serve as anchor on one of the main evening news programmes on French TV, the 8 p.m. (Vingt heures)  news on the state TV channel Antenne 2 (now called France 2). Although she became the most respected of France's evening TV news anchors, she left to become Director of the commerial channel TF1. In the following years, the was editor of l'Express newsmagazine, then returned to chair current affairs programmes on television, notably the very popular and long-running France-Europe Express. She is the partner of the former French Foreign Secretary, Bernard Kouchner.

O.L. - Olympique Lyonnaise - Famous French football team, from the city of Lyon, one of the top teams in French football, having won the League championship seven times in a row, and also the Coupe de France in 2008 and 2012. Lyon's Olympique stadium was the venue for a semi final and the final of the 2019 Women's World cup.

O.M. - Olympique de Marseille - First division French football club, from the city of Marseille, with a chequered history. One of the few French clubs to have won a major international competition (Champions' League, 1993), OM was retrograded to the second division in 1994, following a match-fixing scandal. Back in the first division since 1996, they have since had mixed fortunes. Among other achievements, they were runners up in the UEFA Cup in 1999, 2004 and 2018; they came top of the French First League in 2010, and were runners-up in 2006, 2007 and 2017.

ONF - Office National des Forêts : the French government agency responsible for overseeing French forests and forestry; the French equivalent of the UK's Forestry Commission, or the US Forest Service.

Opéra Bastille -  large modern opera house in Paris, located on the Place de la Bastille, and opened in 1989, to mark the bicentenary of the falling of the Bastille, during the French Revolution.

Opéra Garnier -  The original Paris opera house, located place de l'Opéra, in the 9th Arondissement. Designed by the architect Garnier, it was opened in 1862, and is one of the finest examples of a nineteenth-century opera house anywhere in the world.

Opération escargot – ‘Operation snail’. Name given to protest actions periodically undertaken by French lorry-drivers (and occasionally taxi-drivers), as a demonstration of their griefs, such as the cost of fuel or the tax burden. It involves driving groups of lorries very slowly along main routes,  blocking all the traffic behind them.

Oradour sur Glane : A village in the Limousin region that was the site of a  massacre by Waffen-SS troops in 1944. 642 villagers were murdered, and the village set on fire, in reprisal for the alleged capture by the Resistance of a German officer. After the war, General de Gaulle demanded that the remains of the village be left as they were after the massacre, and that is how the village remains to this day, fixed in time, a memorial to the atrocities of war.

Orange : Orange is the name of the main telecoms operator in France, which was formerly the state owned France Télécom, and was the historic provider of telephone services in France, both landlines and mobile. Today Orange is France's largest telephone company, and the fourth largest in Europe.
The Orange brand started life in the UK as the mobile phone network of a company called Microtel. To run their network Microtel set up a new company called Orange PLC. Microtel operations were eventually acquired by Vodaphone, who then had to sell off Orange as they could not have two mobile phone licences. Orange's worldwide operations were  bought by France Telecom, who subsequently chose the name Orange as their single corporate brand, phasing out the France Télécom brand name in France in 2012. In 2018 Orange still had just over 40% of the landline and mobile phone markets in France, and is responsible for the upkeep of all the ungrouped phone lines and exchanges in France.  It operates phone services in over thirty countries
In 2019, the French government, which originally had a majority shareholding in France Télécom, remained Orange's largest shareholder, but with only 22% of the capital.

Ordonnance, une : 1) A prescription for medicines or specialist treatment, written out by a doctor; an ordonnance is required for the purchase of most medicines, except over-the-counter products such as aspirin or sore-throat tablets. See medical treatment in France. 2) Generally speaking, any public order issued by the authorities.

Orly The name of the second airport (at one time the principal airport) of Paris. orly is situated in the southwest suburbs of the capital, and can be reached by the RER express transit rail link via the station at Antony, and a connection to Orlyval, a driverless automatic light-rail system. Orly long had two terminals, Orly Sud, the biggest, and Orly Ouest.  Since 2019, Orly Sud has been smoit into two terminals, Orly 1 and Orly 2, a new Terminal 3 has been opened, and Orly Ouest has become Terminal 4. TThe airport is mainly used for French domestic flights, plus flights to southern Europe and north Africa, as well as by some low cost airlines. There are a few long-haul flights, including a newly introduced Orly-JFK service with Air France, and new routes to Las Vegas, Newark and Montreal operated by Level.  See Paris airports information

Orsay, Musée d' : French museum of the nineteenth century, housed in the dramatic nineteenth century setting of the old Gare d'Orsay, on the left bank of the Seine in Paris. Notably home to France's finest collection of Impressionist paintings.

Orsec, le plan : name given to emergency contingency operations that may need to be launched by a local Prefecture, in the event of a natural or human disaster. The word is an acronym, notably for Organisation des Secours, (Organising aid).

ORTF- Office de Radiodiffusion-Télévision Française - The French broadcasting authority, from 1964 to 1974. An autonomous agency, it was modelled, by General de Gaulle, on the BBC. it was dismantled in 1974, when the various divisions that it previously included, such as the state TV channel Antenne 2, became autonomous bodies in their own right.

Ouest France : France's biggest-selling daily newspaper, with a circulation of almost 800,000 - which puts it well ahead of any other French daily, whether regional or national. It is produced in Rennes, Brittany, and distributed in the Brittany, Normandy and Pays de la Loire regions of France.  See article on Newspapers in France.

Continue to the letter P


About-France.com does not collect personal data. We use cookies to enable audience statistics, social media and a few ads. If you are OK with this, click or else request more information.