A Dictionary of France
J 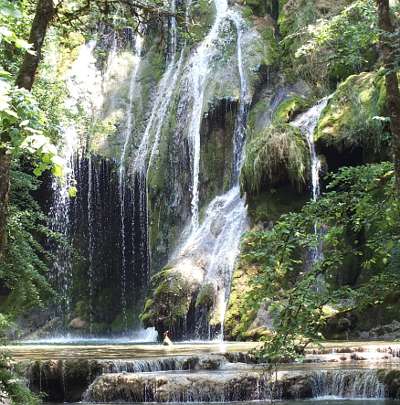 Photo above: bucolic landscape in the Jura mountains


Where is the Jura? What is the Journal Officiel ? And of what French city was former prime-minister Alain Juppé the mayor ?  Here are the answers to these questions and others concerning French words or names beginning with J


J-1 (J moins un) : expression applied on the day before an event, or, figuratively, the last moments.

Joly, Eva : Of Franco-Norwegian origin, Eva Joly was one of France's high profile investigating magistrates before becoming better known as a militant environmental campaigner. In 2011, she was selected to run as the candidate of Europe-Ecologie-les Verts, the French Green party, in the 2012 presidential election.  Forthright and outspoken in a manner uncommon in the world of French politics, she caused major stirs in the early days of campaigning, but lost a lot of support as a result, even from supposed allies in the environmental movement.

Jospin, Lionel - (adj Jospiniste) - born 1937 :  Socialist Prime Minister of France from 1997 to 2002. Jospin served as Minister of Education under Prime Minister Michel Rocard from 1988 to 1992; before and after this period, he was first secretary (leader) of the French Socialist party.  In 1995, he was selected as socialist candidate in the Presidential election, and was only narrowly defeated in the second round by Jacques Chirac. In 1997,  Jospin led the socialists to a decisive victory at the general election, and was subsequently called by Chirac to form a Socialist government.
Though once a Trotskyist, and reputed as a left-winger, Jospin proved to be a very middle-of-the -road Prime Minister. His government introduced the much maligned principle of the official 35-hour working week, but also oversaw the privatisation of a number of state industries and tax reductions. In 2002, he was beaten into third place by the National Front leader Jean-Marie Le Pen in the first round of the presidential election.

Jour Férié : public holiday, bank holiday. The following days are public holidays ("jours fériés") in France, when all or most shops tend to be shut. For a list of jours fériés, see Public holidays in France
Unlike in the UK, when a public holiday falls during a weekend, there is no extra compensating holiday on the following Monday. However, "le pont" - the bridge - is a popular French institution, and when a public holiday falls on a Tuesday or a Thursday, many workplaces remain closed for the Monday or Friday too, meaning that certain services will be closed for four days. However, shops and banks and post offices tend to open normally when there is a "pont".

Journal Officiel, le- The "J.O." is the official publication of the French government. Laws and decrees come into effect once they have been published in the J.O.

Journée continue: The traditional French working and shopping day is broken by a long break for lunch, typically from midday to 2 p.m.  The "journée continue" is the more modern approach, where workers just take a very short lunch break, and shops remain open all day.

July 14th :  Le quatorze Juillet, Bastille Day, the French National Day, and a public holiday.  This day commemorates the fall of the Bastille prison in 1789, the defining moment of the French Revolution.

Juppé, Alain (born  1945) : conservative politician,  Foreign Minister 1993 - 1995, Prime Minister of France from 1995 to 1997, under President Jacques Chirac. In  2004 Juppé was convicted of mishandling public funds, and retired from public life. To the surprise of many, he nevertheless retained the confidence and support of many of his supporters and political stablemates, including  Chirac, and in 2006 began a political comeback, being reelected as mayor of Bordeaux , and remaining in this job until early 2019.   In 2007, he was briefly  minister for the environment, but resigned from this job after failing to get reelected to parliament by voters in his Bordeaux constituency, a city of which he remains mayor. He returned to government in March 2011, recalled by Nicolas Sarkozy to replace Foreign Secretary Michèle Aliot Marie, who was ousted following revelations of her dealings with former but recently ousted North African leaders.
In 2019 he was appointed to the Conseil constitutionnel, or Constitutional council

Jura (2) Mountain range along the French Swiss border, running south-west / north-east from the Rhone valley near Geneva to the Belfort gap, mostly in the area of Franche-Comté. The main towns are Pontarlier and Saint Claude. Among the oldest mountains in France, the limestone Jura rise on the French side through a series of plateaux and folds, reaching their peaks, at between 1400 and 1700 metres, more or less on the Swiss border. On the Swiss side of the border, the range falls away much more steeply. The plateaux of the Jura are cut into by a number of deep gorges, the most dramatic being those of the Ain, the Doubs and the Loue rivers. The Jura is mainly a mix of pastures and coniferous forest, with deciduous forests on the lower levels; it is famous for its mountain cheeses (Comté, Mont d'Or), and for its watch and clockmaking industry, which is closely linked to the Swiss watch industry.

Jura (3) Wine. Possibly the most underrated of French white wines, Jura wines come from the west-facing slopes of the Jura hills, that look out across the wide Saône valley to the slopes of Burgundy on the other side. The best and most distinctive of Jura whites are made from the "Savagnin" grape variety, which is found only in this region, and gives the wine a distinctive sherry-like taste. further information on the wines page.

Jussieu  - Name of one of the central Paris university campuses, occupied essentially by science departments of three Paris universities. The campus, whose main buildings were built between 1958 and 1971, has never been completed, and the campus is still a building site, on account of the massive ongoing programme to remove the asbestos from classrooms, laboratories and offices. In 2007, many of the services of the University of Paris VII left the Jussieu campus for a new campus near the Seine.

Continue to the letter K