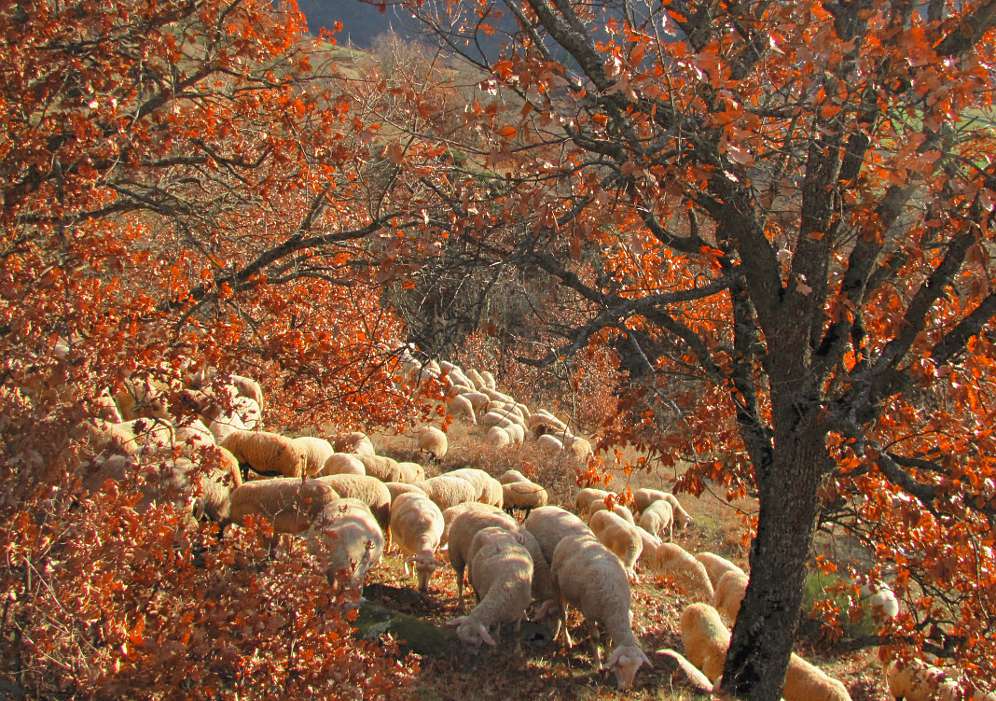 Autumn in France/
France in the Fall

France after most of the tourists have gone

► You are here:   France  ›
Tourism  › France in the Autumn, France in the Fall
About-France.com - the connoisseur's guide to France 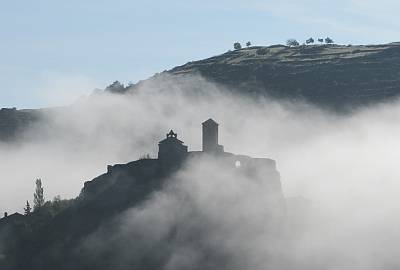 Visit France in the Autumn (the Fall) .


After the last weekend of August, most of the tourist resorts in France suddenly seem empty. Schools go back – in most of Europe – in early September, and business gets back into full swing after a few weeks of soft-pedalling. Paris is again full of Parisians, and much of the French countryside is left to the locals and the neo-rurals who have migrated from the cities in search of a quiet retirement or a slower pace of life.
In France, Summer does not officially end until the Autumn equinox, on 21st September, but for all intents and purposes, Autumn in France starts at what the French call "la rentrée", when schools go back and for most people, holidays are over.
For those who are not tied down by the demands of children or fixed holiday periods, Autumn is one of the best times to visit France. Specially in the southern half of the country, the days can be pleasantly warm - even hot . September and October are not the wettest months of the year, and the countryside can be gloriously pretty in its autumn colours. The Mediterranean and the Atlantic ocean normally remain quite warm enough for swimming in through to the end of October (even beyond for the hardy); and for those who enjoy cycling and country rambling, conditions are often perfect: not too hot, not too cold.


Autumn in France..... the pros and the cons

Click for best online rates for hotels near the following towns on cities and areas of France.

Calais
Cherbourg
Rennes
Angers
Dinard
Rouen
Orleans
Tours
Limoges
Poitiers
Bordeaux Clermont-Fd.
Other areas
About-France.com is an independent user-supported website Links to  affiliate partner websites may generate commission on sales at no cost to the user
Of course, where there are advantages, there are also disadvantages. But generally speaking, when it comes to visiting France in the fall rather than the summer, the pros will outweigh the cons for many travellers.

Paris in the Fall 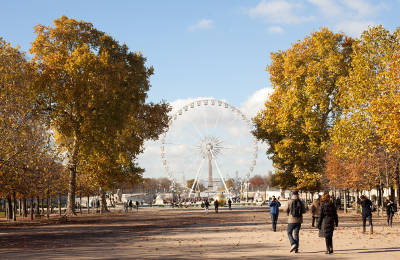 Paris in the Fall
Paris in the Autumn is very much a working city; the French capital is like any other major world city, and it is also very much open for business for tourists throughout the year. Paris hotels remain open all year round, as do the city's museums, art galleries and other attractions. While there may be queues at major monuments in Paris any day of the year, from late September onwards, they will tend to be shorter than in the warmer months of the year.
Paris is a fabulous city at any time of the year; but "Paris in the Fall" is just as attractive as the fabled "Paris in the Spring" . Along the Seine, on the Champs Elysées, along city avenues and in the public gardens, the flush of autumnal colours gives the city a different look.
In addition, once Parisians are back in town, the city's cultural life gets back into full swing; Paris like any great city offers a full programme of cultural events, including concerts, cinema, opera, theatre, shows, ballet and other events to suit all tastes.
The same is true, to a lesser degree, in other French cities; cultural life takes off again after the summer recess.
Shopping is great from October to December, as shops stock up with the best and biggest range of items, in the runup to Christmas; while the sales take place after the New Year, competition ensures that there are plenty of special offers and bargains to be had in city shops in France in the weeks and months before Christmas.
In the final weeks of Autumn (in France, Autumn finishes officially on 21st December, the Winter solstice), many French cities and towns - and notably Strasbourg, Paris, and Colmar - put on Christmas markets. 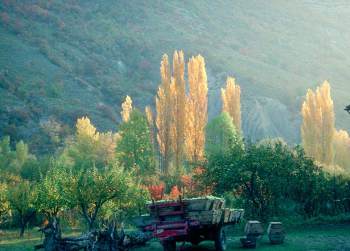 Apple orchard in the Alps  - late October
For hikers, ramblers, nature lovers and other visitors who are just looking for peace and relaxation, late September to early November is ibe if the best times of year to visit rural France, particularly in the southern half of the country. Autumn colours come early in the more upland areas, while Autumn can be decidedly slow in coming to areas on the plains of Southwest France and around the Mediterranean.
October is a particularly good time to visit sites such as the Cathar castles, the Camargue with its migrating birds, or the Ardèche gorge, or take a trip into the Pyrenees on the little yellow train. For those just wanting to enjoy the French countryside in the mellow fruitfulness of its Autumn colours, official and unofficial hiking trails tend to be deserted, except at weekends, and the same goes for monuments that are either still open for guided tours, or, like some ruined rural castles, open to all-comers. For an autum city-break, the Mediterranean resort of Nice is generally a good choice. 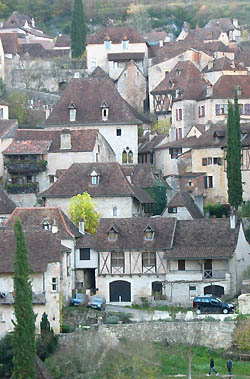 Villages that are reputed as "plus beaux villages de France" - places such as Saint Cirq Lapopie or Montflanquin, are no longer packed to bursting with busloads and carloads of tourists, and their car parks are almost empty, except at weekends. As long as the weather is good, this is the best time to visit them, at a time when window boxes are still decked with the last of the summer flowers, and many of the tourist shops and boutiques, except for those run by local craftsmen, are closed.
In other French villages, those that do not normally cater for hordes of tourists, local cafés, restaurants and markets will have gone back to their slow ways, serving their local customers and a few passing travellers as they have done for many years. And here and there, farmers and producers will be offering fruit and vegetables and other local fare "en direct du producteur", or straight from the producer.
In Autumn, after the harvests are in, the fields are tilled, the fruit is picked, the pace of life in rural France is distinctly slower and more relaxed. The evenings draw in, and in rural inns, roaring log fires will often be lit to greet the passing traveller. 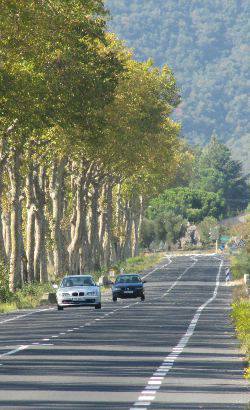 Empty October road in the South of France 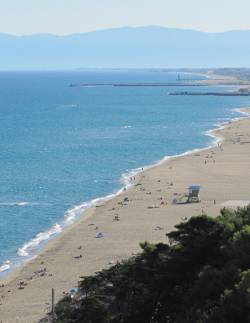 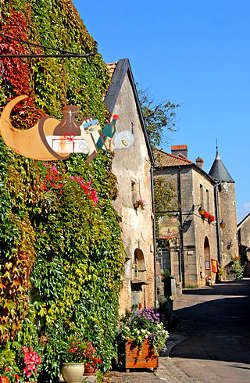 The best of France on About-France.com