How to enjoy Paris on a shoestring budget

►   You are here:   France  › Paris  › Paris for free
About-France.com - the connoisseur's guide to France
IMPORTANT - COVID-19  information for Paris. Bars and restaurants will remain closed in France until at least the end of March. After that, the speed of the hoped-for progressive return to normal will depend on whether the spread of the virus remains under control, and on the rate at which the population can be vaccinated. At a convervative guess, Paris should be largely open again for tourism by June 2021, though some restrictions and social distancing rules may stay in place for a good while after that.
Some museums and art gallerieshave already reopened, but social distancing rules apply. Whether they remain open in the weeks and months of 2021 depends on whether the covid-19 virus is kept under control.

There are major monuments and museums in Paris that offer free entry for everyone every day; there are others that are free for students every day, and there are others that are free for everyone one Sunday a month. In addition, there are plenty of other ways, besides visiting museums and monuments, of enjoying Paris, its ambiance and its life, without spending more than is needed for a cup of coffee or a beer on a café terrace.


Yopu may also like :  Paris on a budget    and our choice of Cheap Paris hotels

There are plenty of things to see and do in Paris, without spending a single centime. These include;

Free for all - The permanent collections of museums owned and run by the City of Paris tend to be free. This may require obtaining a free ticket from the "Accueil" or ticket office before you can get in. The best free Paris museums are :

The best value Paris visitor pass  + 5% discount with About-France.com
Don't waste your precious time in Paris.....
Unless you want to spend hours standing in a queue to get into the top Paris monuments, a skip-the-line pass is vital, and  The Paris City Pass from Turbopass is the cheapest option. Museums, attractions, travel and Seine cruise from just 99.90€  for a two day adult pass and 19.90€ for a two-day child pass. Buy well in advance, for delivery worldwide.
To get an exceptional 5% discount. Click through from here to book your pass, and quote code aboutfrance
Free only on the first Sunday of each month:
The Louvre,  Musée Rodin, Musée Picasso, Musée d'Orsay and others.

Free for students and anyone under 26
Apart from this, you'll have to pay to get in to the main monuments and attractions. And unless you want to waste hours of time standing in queues, a skip-the-line visitor pass, including museums, sights and public transport, is essential.
About-France.com recommends the Paris City Pass, which offers better value than any other pass.  Plus, get a  special 5% discount with About-France.com using code aboutfrance

Free monuments and other places;

Free to wander - Paris on foot

As long as the weather is OK, Paris is a great city for wandering through: and what better way to soak in the atmosphere of a city than to walk through its old streets, and through its famous sites.  And if you're into running, take a look at Runparis.fr, which offers free guided running tours of the French capital

Five places to walk in Paris
Stop to admire, enjoy the atmosphere, stop off for a coffee or a drink, visit the free monuments on your route - from the outside or the inside - and each of these four Paris walks can take a full morning or a full afternoon. 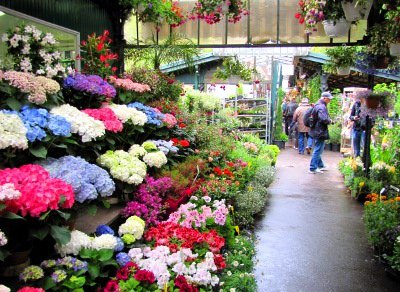 The Paris flower market, on the Ile de la Cité
1. The Paris flower Market
Following the visit to Paris in 2014 by the Queen of Britain, the Paris Flower Market has been renamed "Marché au fleurs reine Elizabeth II". Located on the Ile de la Cité, near the Pont Neuf, Paris's famous flower market is a small haven of flowers and plants, where Parisians have for centuries come to find plants and flowers to decorate their apartments. With its orchids, exotic flowers, and many more flowers and more ordinary potted plants, it is a delightful place to stop off at, in the heart of the city. Continue this visit with the next walk.... 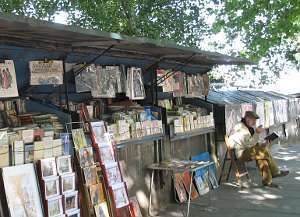 One of the many Paris "bouquinistes" beside the Seine
Starting from Notre Dame, wander along the banks of the river either upstream, to the Ile Saint Louis, or downstream to the pedestrian Pont des Arts bridge, and beyond. Up at road level, the banks of the Seine are home to hundreds of "bouquinistes"  or second-hand bookstalls. Many still do sell old books; others sell old prints or modern copies of old prints, even old maps and historic newspapers, others sell postcards and souvenirs. The bouquinistes are a historic Parisian tradition. On the right bank of the Ile de la Cité, enjoy the sights and smells of the historic Paris flower market.
Down near water level, the lower quais, once used as towpaths, are among the great romantic spots in Paris.

3. The Latin quarter
The narrow streets off the left bank of the Seine - that is the left bank in relation to the flow of the river - are full of small shops, from classic tourist shops to clothes shops, as well as cafés and restaurants. There are also arts and craft shops, including antiquarian booksellers, specialist bookshops, and small art galleries. Walk through the old streets, enjoy the sights, the curiosities and mouthwatering smells from the many small restaurants in the little streets between the Boulevard Saint Germain and the Seine; or look at books and go window shopping in the stores of the Boulevard Saint Michel. 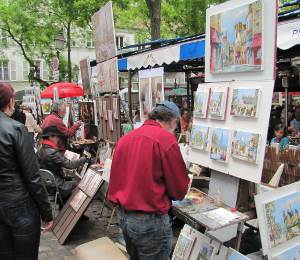 Artists at work in the Place du Tertre, on Montmartre
Although it is very touristy, Montmartre still has plenty of charm and atmosphere, and by far the best way to see it is on foot. From Anvers metro station on line 2, walk straight up towards the basilica. There is a funicular railway up the hill for those who don't like the idea of climbing the 222 steps to the entrance of the basilica. But the steps are not hard, and wind up through a garden, with great views over the rooftops of Paris. At the top, the Sacré Coeur basilica has the largest mosaic in France. Beside the Sacré Coeur, the old "village" of Montmartre, with its narrow streets and square, throngs with artists studios, street artists, cafés and restaurants. Though some of the artists will do you a decent portrait, there are also many scam artists; if you want to have your portrait done, prefer the more sedentary artists on the square, la Place du Tertre, who will sit you down on a chair, to the mobile artists who accost people in the street. But portrait or no portrait, Montmartre is worth a visit for the atmosphere. It's not what it used to be in the olden days, when Montmartre really was one of the haunts of Parisian artists like Utrillo or Toulouse-Lautrec, but it still has plenty of atmosphere and charm. 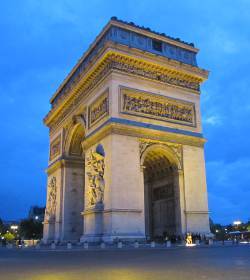 The Arc de Triomphe, at l'Etoile -  Charles de Gaulle
Enjoy the experience of the Louvre from the outside. Wander through the main courtyard of the Louvre and view the glass pyramid close up. It is more impressive from the outside than from inside. Then cross the place du Carroussel, past the Arc de Trimphe du Carroussel, and into the Tuileries gardens. The Carroussel arch is topped by a nineteenth-century replica of the Quadriga, or Horses of Saint Marks, the finest Roman equestian bronze statues, which used to adorn St. Mark's cathedral in Venice, until they were removed to a museum to protect them from atmospheric pollution.
The Tuileries gardens are a popular park for Parisians and tourists alike. At the far end from the Louvre, they give onto the Place de la Concorde, in the middle of which stands the oldest monument in Paris, the 75 ft. Luxor obelisk dating from the thirteenth century BC.
From the Place de la Concorde, then wander up the Champs Elysées, the most famous street in the world. This magnificent tree-lined boulevard runs 1900 metres (just over a mile) from the Place de la Concorde to the Place charles de Gaulle, or Place de l'Etoile, in the middle of which stands the great Arc de Triomphe, or Triumphal Arch, erected in the 19th century to commemorate the victories of Napoleon.
Walk up the Champs Elysées on the right side if you want to see the most popular shops, including many flagship outlets for international brands. Wander up on the left of the Champs Elysées if you prefer less crowds and less shops - though of course there are shops and restaurants on both sides of the avenue.
Other places to wander: Enjoy the Champ de Mars, and admire the Eiffel Tower from below; or wander in the Jardins du Luxembourg, a very popular park in the Latin quarter

Walking is free ! But if you have a Paris City Pass or a  travel pass, then you also have free unlimited travel on public transport within central Paris.

► Free tourist attractions in other parts of France

No need to spend a fortune to enjoy a few days in Paris; as well as the big paid-entry museums and monuments, Paris has half a dozen great museums that are free, plus interesting monuments and plenty of sites that can be enjoyed to the full without spending a single Euro.

Hotels near the Eiffel Tower.
Click here
for a choice of over 50 hotels close to the Eiffel tower


Going to London too ?
check out London for free


In an emergency
in Paris: 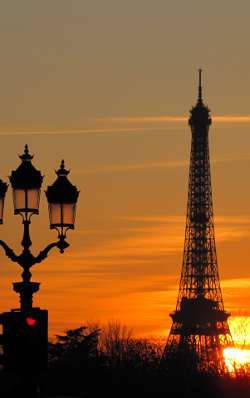 The Eiffel Tower - no free visits, of course, but the Paris's emblematic landmark defines the view from many parts of Paris


Paris travel tips
Travelling round the city ? Here are a few tips about getting the best deals with public transport.

Paris tourist attractions map
Get your bearings before you reach Paris. See where's where and what's nearby.

Paris travel maps
View or print out a plan of the metro system in the central area of Paris.. 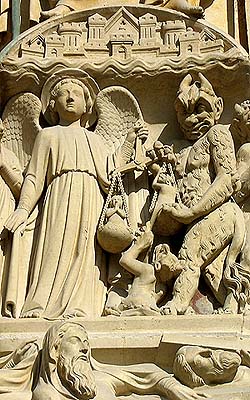 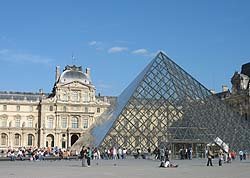 The Louvre museum, and its glass pyramid.